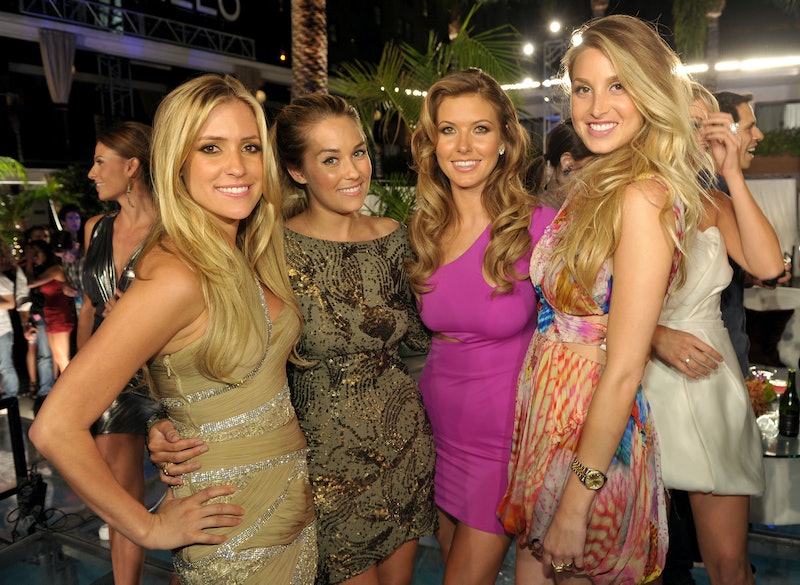 In the final moments of MTV "reality" show The Hills, the Hollywood sign rolls away to reveal a studio backlot while Brody Jenner stares directly into the camera lens. His eyes tell us what we'd suspected for years: The Hills was fake. It is the Toto-pulls-back-the-green-curtain moment of our generation. However, it would be a mistake to say the series was 100% bullshadooby. While a lot of the Laguna Beach spinoff was a lie, some things on the show were not fake. One of the real elements of the "reality" series was the music: Every single episode of the "reality" show used a dozen or so real songs by real musicians.

It's been nearly five years since the curtain was lifted and the studio backdrop exposed, but when I hear certain tracks that were featured on The Hills, I can't help but think about specific scenes from the show (e.g., "Apologize" = "YOU KNOW WHAT YOU DID"). The sensory recall is strong with these songs.

If I close my eyes while listening to any of the following tunes, it's as close as I will ever get to hanging out at Les Deux (RIP) with Lauren Conrad, Audrina Patridge, Heidi Montag, Lo Bosworth, Whitney Port, and Kristen Cavallari:

"YOU STARTED A SICK LITTLE RUMOR ABOUT ME."

Before Lady Gaga was THE Lady Gaga, she performed at some event where Lauren and Whitney were in charge of her wardrobe.

This song plays when Heidi tells Lauren she landed a job at Bolthouse Productions. The scene takes a turn for the amazing when the call is dropped: Lauren shrugs at the abrupt ending to their conversation and gets back to work. Heidi, however, repeats Lauren's name into the receiver multiple times, her voice trembling with fear.

"Whataya Want From Me?" by Adam Lambert (Season 6 Episode 2)

As Kristin and Stephanie wrap up their dinner date/argument, this Adam Lambert hit cues up. (To answer the song's question: Stephanie wants an apology from Kristen. Kristen chooses to roll her eyes instead. CLASSIC CAVALLARI MOVE.)

“If this is the weekend to have a hall pass and find out your girl has got a boy, this is probably it, right? No remorse, right? Contemplating here.”—Justin Bobby, philosopher.

When Lauren sneaks out of Heidi and Spencer's wedding and exits the series for good? ICONIC.

"On The Way Down" by Ryan Cabrera (Season 6 Episode 8)

No joke, the image of the "HOLLYWOOD" graffiti wall art that was commissioned by Spencer pops into my mind every time I hear this song. Some might call it a curse, I call it a blessing.

“Bring On The Day” by Vaughan Penn (Every episode)

"Previously on The Hills..."

"Don't Phunk With My Heart" by The Black Eyed Peas (Every episode... I think?)

Any time some mischief is about to happen/is underway, a snippet of this BEP song fires up.

"Unwritten" by Natasha Bedingfield (Every episode)