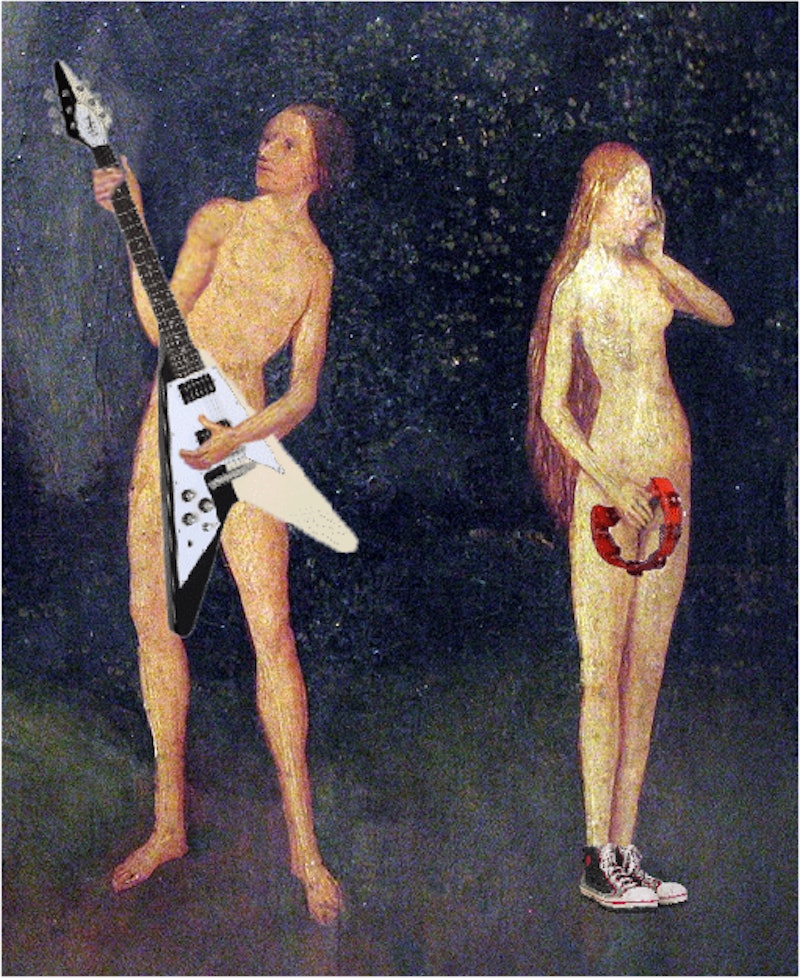 Warning: this article may shock and disturb you and if I’m doing my job right, it’ll cause you to rethink your entire existence. I'm here to tell you that you were probably taught a lot of myths about sex from that weird P.E. coach who also teaches sex-ed. *Begins to weep* And they are wrong, so wrong. No, Coach Carr, if you have sex you are not guaranteed to get chlamydia and die. But you might get chlamydia, so please remember the part where he tells you to use a condom. Aside from that, I’m about to ruin everything you’ve ever believed. But fear not! Let us not forget that new information is good information, especially when it comes to sex.

1. When you have sex for the first time, you "pop your cherry"

2. Losing your virginity is a thing that happens

Speaking of things that aren’t real, virginity is a lie. Virginity is a social construction created mostly so that men can have ownership over women and be like, “That is DEFINITELY my baby.” Ugh, bored.

3. The clitoris doesn’t exist. (I never want to write that sentence again)

If you own a clitoris, this might seem like obvious information but (brace yourself) a lot of sex-ed classes DON’T teach kids about the clitoris. Why on earth would they forget to include our magical little button in their lesson plans, you ask? It’s because they’re afraid of it. The clitoris’ ONLY function is to give us an orgasm. It literally does nothing else. Sounds like my dream job. And what happens when girls learn that they possess such powers? The entire world is thrown off of its axis, every economy in the world begins to decline and electrical systems across the country break. So now you know. It’s real, it’s here. Hello, Apocalypse.

4. The whole thing is called a vagina, right?

Wrong. It might not seem super important, but calling our body parts by their given names can help us all out for a variety of reasons. First, it’s just plain respectful. My name isn’t “baby” and I would love it if guys on the street stopped calling me that. Second, they do completely different things! The general term for the external parts of female genitalia is called the vulva while the vagina is on the inside. Head, shoulders, knees, toes, vagina, vulva. Don’t forget it.

Listen, the vagina is independent. It doesn’t need a douche or a deodorant or a fragrant wipe. What it needs (like many of us) is to be left alone. The vagina is often described as a self-cleaning oven and this is NOT a myth. It produces the perfect amount of bacteria and acid to maintain a healthy balance and anything that you add to that is gonna mess it up and probably give you the symptoms that you’re trying to avoid in the first place.

Once upon a time, a group of science dudes did some science stuff on a tiny number of women and came to a scientific conclusion that when women ejaculate, they’re really just pissing themselves. But then, a bunch of women figured out that (gasp) men don’t actually know that much about female ejaculation.

7. There’s one way to orgasm, and that’s by screaming at the top of your lungs.

However you experience orgasm is the right way to orgasm. Whether that results in a noise complaint or could go unnoticed in a library, you’re doing just fine.

10. The only way to have an orgasm is through penetration

News flash, it’s the opposite. Women are exponentially more likely to have an orgasm from clitoral stimulation than from vaginal penetration. That rhymes, so let’s turn it into our national anthem and sing it from the mountaintops.

More like this
Here’s How To Deal With Sexual Frustration If You Don’t Want Casual Sex
By Annakeara Stinson and Mackenzie Sylvester
Here’s How To Reignite The Spark In A Sexless Relationship
By Vanessa Marin
I'm 42 & I've Never Had Sex. Is It Too Late?
By Sophia Benoit
An Honest Review Of The TikTok-Famous WalkingPad
By Kaitlyn Wylde
Get Even More From Bustle — Sign Up For The Newsletter