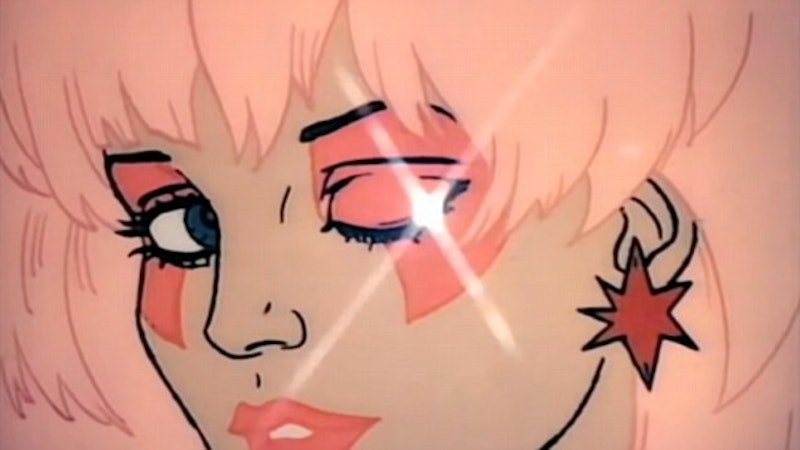 Many of us hardcore Jem and the Holograms fans aren’t sure how to feel about the live-action film version of the 1980s cartoon classic that’s hitting theaters in October. Will the movie retroactively ruin our childhoods, or will it be truly, truly, truly outrageous? Only time will tell. In the meantime, let’s take a few moments to appreciate why Jem was, basically, the best thing that happened during the entire 1980s. (OK, I know that other important stuff happened, like that time the Berlin Wall came down, but, guys. Jem had magic earrings.)

For the uninitiated, Jem and the Holograms ran from 1985 to 1988, and then played in reruns for about five years afterwards, making it the lifeblood of many kids born in the ‘80s and early ‘90s. The show stars Jerrica Benton, her sister Kimber, and her friends, Aja and Shana. In the first episode, Jerrica inherits a crazy purple hologram machine – Synergy – that creates hyper-realistic holograms of essentially anything. With fancy red star earrings that let her activate Synergy anywhere, Jerrica can change her appearance and the appearances of others at will, and can call forth monsters, cars, and whatever else she feels like. Armed with such mind-boggling power, she does the logical thing, and starts a rock band! She transforms herself into a pink-haired rock goddess named Jem, and her friends join her to become the Holograms. They become the most popular musicians in the world, and spend most of their time battling their arch-nemeses, the Misfits.

Here are just a few reasons Jem was the absolute best:

Glamour and glitter! Fashion and fame! This show had SO MANY CLOTHES, and they were all completely ridiculous, and by that I mean “AMAZING”. Every insane excess of 1980s fashion was on display in Jem, and many more that could only exist in a psychedelic cartoon dreamland. Any Jem fan will be able to rattle off her favorites – the “Glitter and Gold” outfit, above, is definitely one of mine.

I know the music sounds mostly terrible from a contemporary adult perspective, but, to a kid, it was pretty amazing. One of my faves is "I Got My Eye On You," above. Also, "Deception," partially because it's good, and partially because of Jem's pairing of an orange dress with neon green tights, which is so insane, it's genius.

The songs in Jem were accompanied by ridiculous music videos in the best ‘80s style – meaning, they were mostly completely random, featuring moody montages and bizarre fantasy sequences. This one has unicorns! And swimming! And hot air balloons!

4. The Messed Up Romance

I think we can all agree that Rio was the most boring purple-haired boyfriend ever, and not all that smart if after three years he couldn’t figure out that Jem was simply his girlfriend...with pink hair! But I sort of love how messed up the whole romance in this show is. After all, Rio sort of dates both Jem and Jerrica the whole time, even though he has no idea that they’re the same person (again, he’s not the brightest). Jem/Jerrica never seems to mind that her BF is basically cheating on her with herself. I know she’s lying to him and all, but he’s a pretty terrible boyfriend if you think about it.

Jem and her bandmates’ makeup is made up of big, bright geometrical shapes, something I have learned from experience looks cooler in cartoonland than on actual human faces. Although, I did just discover that there are tons of Jem makeup tutorials on YouTube, so now I think we all know what I’ll be doing with my evening. (That particular Jem-wannabe happens to be my kickass sister.)

Synergy describes herself as “the ultimate audio-visual entertainment synthesizer.” So, essentially, she’s the coolest, most badass fairy godmother ever. She can create anything with holograms, including, at various times, doppelgangers, angry bears, and Abraham Lincoln. (The video above seems to suggest that, even with all this power, most of what she does is give people new outfits.) She also dresses way better than the fairy godmother in ­­Cinderella. I mean, she has a sweatband running across her forehead.

The eighties were all about consumption, and Jem and the Holograms was no exception. Forget trying to teach kids to appreciate the simple joys in life, like sunshine and flowers or whatever. Jem taught us that stuff is good. In the very first episode, when Jerrica discovers Synergy, Synergy showers her with gifts: clothes, musical instruments, and a sparkly red and gold car. The show taught us that buying stuff will make us happy (particularly if that stuff came from the extensive Jem toy line).

Kimber is Jerrica/Jem’s red-headed little sister, and she shows her resentment of Jem’s popularity more than once. I hated Kimber as a kid, but only because her little-sister angst resonated with me. When my older sis and I would play Jem as kids (as you do) she was always, always Jem, and I therefore had to always, always be Kimber. Freaking Kimber! Who wants to be the character with the keytar?!

Maybe I’m still getting over it.

In typical ‘80s fashion, there characters in this show have completely insane, massive hair. And I’m not only talking about Jem and the Holograms – remember the curling, flowing mane sported by Riot?

We all know that Rio was the worst, but I sort of love Riot for teaching me the meaning of “douchebag.” Seriously, that hair. Is. The. Best. Can we blame Jem for being tempted?

11. It’s feminist (well, if you turn your head sideways and squint)

I’m not going to pretend that Jem and the Holograms was particularly deep, but it did give it’s young viewers adult female role models who were independent, powerful, and in control of their own lives. Sure, Jerrica spends way to much time wringing her hands about whether Rio loves her or Jem (did I mention she’s in a love triangle with herself?), but she’s also a savvy businesswoman and manager of the Starlight Foundation. The Holograms are multitalented as well: in addition to being musicians, Shana is a fashion designer, Aja is good with mechanics, and Kimber...gets kidnapped a lot. (Sorry, Kimber, it had to be said.)