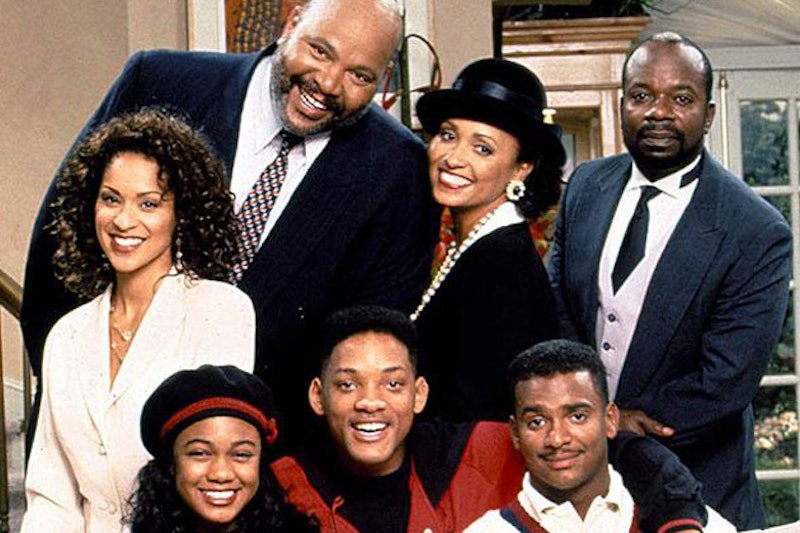 In 2016, it will have been two decades since we said goodbye to Will and the Banks family in The Fresh Prince of Bel-Air finale. It's hard to believe nearly 20 years have passed since we last hung out with Will, Ashley, and Carlton. The lovable family sitcom left a void in TV when it went off the air in 1996 that has never quite been filled — like, not only did Fresh Prince have the best television theme song ever, it was also one of the few sitcoms about a black family to be a mega hit (sadly, this is still not something we see on television very often). That is not the only reason why the finale, "I, Done," still gives us all the feelings though.

Will Smith's TV series was heartwarming, laugh until you cry funny, and it occasionally broke our hearts. If you grew up watching the Banks, then they felt like they were your family too. When Carlton did his signature dance moves, you danced along with him, when everyone got exasperated with Hilary, you rolled your eyes too — and when Ashley and Will had a heart to heart, there were totally tears in your eyes. When the Banks left us, they really left us, and even now the finale breaks our hearts.

They Turned Our home Into An Empty House

As finales go, Fresh Prince's was pretty traumatic. It's not like rocks fell and everyone died, but when the entire family moved to the East Coast without Will it was devastating. Will stayed behind to finish college, but when he stood alone in the empty house where Uncle Phil and the rest of the Banks' helped him turn his life around it was like all the air was sucked out of the room. Since we were kids when we watched the finale, the loss and the memory of the loss is way more visceral than it would be if we were watching the show today. We were so not equipped to deal with such a huge, bittersweet farewell.

Will Was Not Prepared to Go

Will felt so woefully unprepared to let his family go himself. In "I, Done," Will does everything he can think of to stop the house from selling. He is afraid of being alone and terrified that he really hasn't come very far since he moved out west. And who among us can't relate to that feeling?

Will and Carlton were more than cousins. They were best friends. When they said their goodbye it was wrenching. Will promised Carlton he would be there for him "whenever, wherever" and Carlton promised the same. Yeah, just try not getting emotional when they do the "Carlton Dance" together.

Ashley and Will's goodbye was the most traumatic of them all. Even they did not have words to express how much emotion was in the moment. Instead, they just wrapped their arms around each other. It was a perfect and beautiful ending for one of the show's best duos.

All Of The Geoffrey Moments

Let's be real, Geoffrey was the best Fresh Prince character. He put up with a lot of crazy requests from the Banks, but in the end he was part of the family. The finale not only gave him a great sendoff by letting him return to England to be with his son, it also gave him a perfect goodbye scene with Will, Uncle Phil, and even Hilary, whose bags he carried out of the house one last time because he wanted to, not because he was being paid to do so. Geoffrey's final scenes make you curse Fresh Prince for leaving and profess your undying love in the same breath

Because Uncle Phil Never Gave Up On Will

Uncle Phil never once gave up on Will and nowhere was this more apparent than in the finale. Even though Will did not believe he had what it took to stay in California and finish school on his own, Uncle Phil did. He always saw Will's potential and was basically Will's dad by the end of the season. So, yes, tears are appropriate when Uncle Phil trusts Will with the keys to the house at end, even though Will tried everything to sabotage the Banks' attempts to sell the house. It was proof that over the course of six seasons, Will learned what it meant to be part of a big sprawling family that wouldn't allow you to fall off the grid.

Call me a sap if you will, but one the things that always gets me is the fact that even though the Banks move all the way across the country, it was clear they could never truly leave Will behind. That's why the finale is still a classic. gets us every Because even though this is the last we ever see of the family, we know that somehow, somewhere they are still there for each other, even though the house Will grew up in is left empty at the end. No one could ever pull the Banks apart. Not even a series finale.