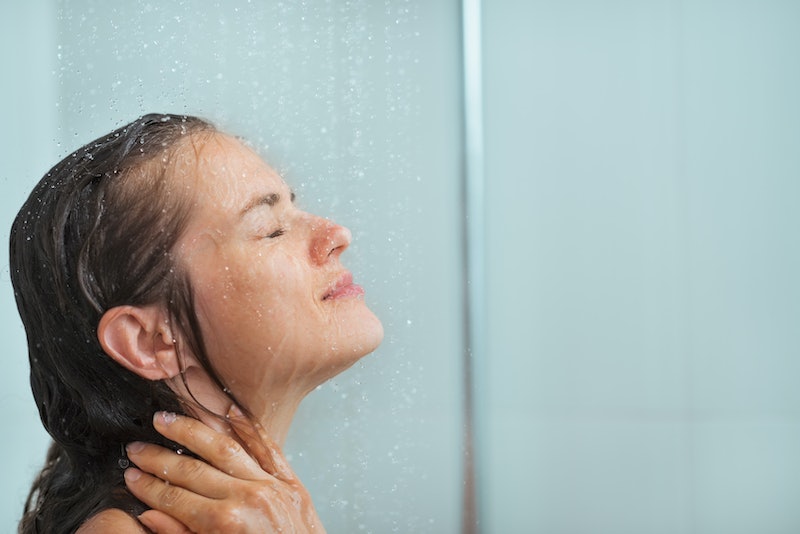 So you want to have sex in the shower. Maybe you’re feeling a little adventurous. Maybe you live in New York City with three roommates in two bunk beds and this is your only hope for privacy. Maybe your SO has BO and you'd like to avoid that whole conversation. Shower sex to the rescue!

Some naysayers like to say shower sex is difficult, but frankly, the benefits outweigh the challenges. For one thing, the acoustics: if you tend to break into song during sex, guess what? You’re going to sound amazing. It’s also extremely efficient. You know how some people shower before sex? Or right after, like that Catholic guy who Miranda dated in SATC season one? You can do it DURING. How's that for time saving? (Pretty darn good, I’d say, even if you're not showering all that often).

There’s also the matter of moon sex, which is what hippies like to call boning during your period. Two great things about this when combined with showering: you can spare your towels (and also spare yourself the extremely unsexy act of pausing to get towels) while also effortlessly recreating the best scene from Psycho. There’s no losing here.

There are some downsides though. One is safety: both sexual and otherwise. Condoms haven’t exactly been tested for hot water and shower gel situations, and since water can mess with lubricant (both the natural and the water-based kind from the bottle), you might be more prone to breaking a condom.

As far as your non-sex protection, hard slippery surfaces plus balancing plus thrusting have been known to cause accidents. Let’s all take a moment of silence for Hannah Horvath's parental horror on Girls. (Actually, now that I'm thinking of it, this other awful incident happened to Hannah in the shower on Girls too. Shower shenanigans=not a good time on Girls).

Disclaimers aside, this is America, so you know that somebody, somewhere has designed a product you can buy for shower sex. In fact, there's a lot of products. Thanks, capitalism! These, combined with good old fashioned guidance from the internet, can seriously hack your shower sex experience.

Did you know people have created suction-on handles and foot rests for the shower? They're for old people and shaving, and thus probably not meant to hold your full body weight. But they can still be game changers for keeping your balance or, erm, gaining special access, during pregame tomfoolery.

Vibrating sponges, loofahs, and waterproof toys could all be in your shower right now. Meow.

Another thing you didn’t know existed: flavored, non-toxic shower gel (think about it a minute and it will make sense). This is almost as much fun as that soap you can write on the tub with. Almost.

The best part this totally useful product: no one needs to know what these are really for. Blame your visiting grandma! An adorable mat on the base of the tub will help you keep your footing, while a few strategically placed treads on the shower walls will give your back some traction. IF YOU KNOW WHAT I MEAN. (I mean that you can rest your back on them while you have standing intercourse in your shower).

Sadly, water washes away water-based lubes. And since that includes the natural kind of lube, you might want to keep a silicone-based formula in your shower regardless of whether you need it on dry land.

I mean, whatever that means to you. May we recommend some music and the tub-appropriate equivalent of scented candles, the shower bomb?

7. Birth Control Other Than Condoms

Again, condoms haven’t been officially approved for wet-and-wild conditions, so you should have backup: a pill, an IUD, the other, Elaine Benes kind of sponge... you get the picture.

We would be remiss to say that sex in the shower is always the greatest idea. To be frank, it can be a little dangerous, and it’s really easy to back into a faucet, slip out over the side of the tub, or end up gasping for air under the shower head. With these factors in mind, it’s advisable to choose your positions wisely.

If You're Their Height Or Taller:

Try resting your back against the wall and wrapping one leg around his waist. If you're working with a tub situation, a well-place tread sticker on the edge could work as a great footrest.

Try wrapping both legs around his waist, and consider buying one of those stick-on treads for your wall that we mentioned earlier.

If You Want To Keep It Simple:

Face the wall, brace your hands, and bend over. It's really that easy. Note: this is also fairly slip-proof and stable, especially with a mat (at least as far as slippery-surface upright sex goes), so, feel free to go to town!

If You're Not Feeling The Vertical Thing And/Or Are Drunk In Love:

Have him recline and get on top (preferably under the shower stream to stay warm). Now say it with me: SURFBORT.

If Want To Lay Down But Can't Because You Live In A Small Apartment And Bathtubs Are For Rich People:

Try it lotus style: have him sit with his legs extended and get on his lap, with your legs wrapped around his waist for leverage. Bonus: This is super touchy-feely and romantic! Other bonus: he sits in the soap scum!

And Most Importantly: Know When To Give Up.

Guess what? The shower is a great place for foreplay. Or afterplay. Or for partial-sex-but-then-giving-up-and-taking-it-to-the-bed play. If you're not having a good time, move on!

The number one rule of shower sex is to have fun, so please: be safe, get some accessories, and first and foremost, do what feels good to you, including giving up on shower sex. I won't tell anybody.