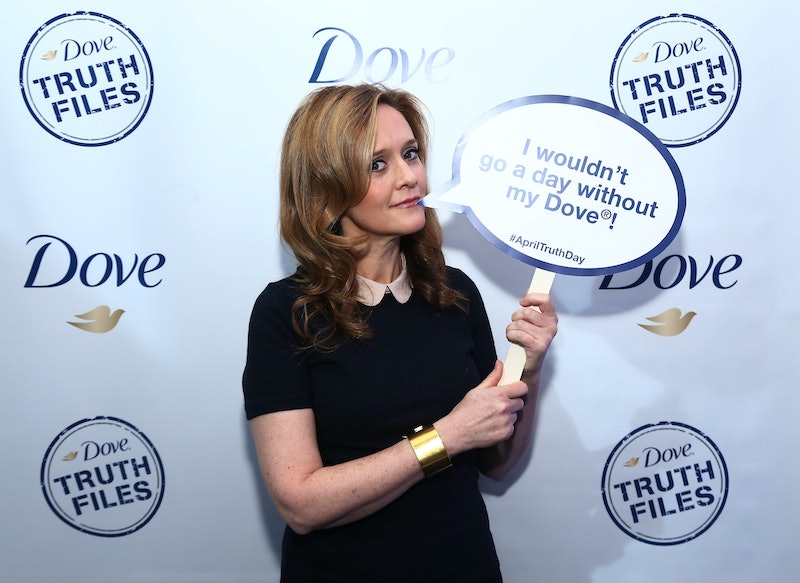 As Jon Stewart himself said during The Daily Show on Thursday night, it's the end of an era. No, calm down, Stewart hasn't left the show just yet. Instead, Thursday night was the last night that featured correspondent Samantha Bee, who is leaving The Daily Show in order to work on a new TBS show with her husband Jason Jones. Bee was red-faced and in tears as Stewart re-introduced her to the audience after a six minute montage detailing her funniest and most poignant sketches, as well as a parody tale of how she came to be involved with the show and the serious impact she had had. Basically, there wasn't a dry eye in the house. The loss of Bee takes the amount of regular female correspondents on The Daily Show down from two to one, and, although the amazing Jessica Williams is more than capable of picking up the slack, it's still a hard blow to take. After all, Bee was the longest serving correspondent on the team.

But, more than that, Bee was phenomenal when it came to tackling the expansive minefield that was women's issues. When it came to Williams, I looked to her for a poignant yet hilarious look at issues facing women of color and feminists of color — an invaluable and underrepresented issue in the news, as far as I'm concerned. When it came to Bee, I looked for a critical but uproariously funny look at women's issues and politics... from the point of view of a Canadian. Take, for example, "Bristol Palin's Choice," in which Bee tried in vain to get the people at a Sarah Palin convention in Florida to say the word "choice" with regards to Bristol Palin's pregnancy.

The amazing half-valley girl, half-Beavis and Butthead voice she affects in order to pretend to be a 17 year old girl aside, Bee used comedy to perfectly highlight that it was every family, and every individual's, right to make choices about their own personal lives — Bristol Palin included. That is far from the only example that shows Bee's expert range as a comedian and a correspondent, but it's one of the highlights of her 12 year long stint on The Daily Show for me because of how clearly it displays the exact kind of issues that Bee loves to tackle and the way in which she comes at them and makes them both entertaining and educational for the audience. Imagining this same sketch done by Aasif Mandvi or Jordan Klepper just doesn't work.

Already I am hoping that when The Daily Show chooses to replace both Bee and Jones, they will decide to hire two more women to take their place instead, bringing the gender ratio of the regular correspondents from 4:1 in favor of men to 4:3 — a.k.a. making the broad range of issues that will be tackled on The Daily Show a little more evenly split between men's issues, women's issues, and issues that concern all people regardless of gender. Because that's what was important about having an amazing woman like Bee as a member of the correspondent team. Of all of the news stories that she sunk her teeth into, it was bringing a feminine perspective into the boys' club of the correspondents' team that was so necessary and so important.

Anyone can handle a political news story, but women's issues are best told from the point of view of women for the sheer fact that we need more of their voices telling their stories. When it comes to issues like pro-life or pro-choice, when it comes to legislation that restricts female birth control from being covered under healthcare, when it comes to the gender pay gap, and so on and so forth, a female correspondent will be more thorough and more passionate about the subject matter, if only because it is directly affecting them and their life. I'm not saying that the male correspondents on The Daily Show wouldn't do a good job and pay attention to every detail, because The Daily Show hires no one but the best and is trusted even above some news stations, but there's been a long enough historical precedent of female narratives being told through the eyes of males.