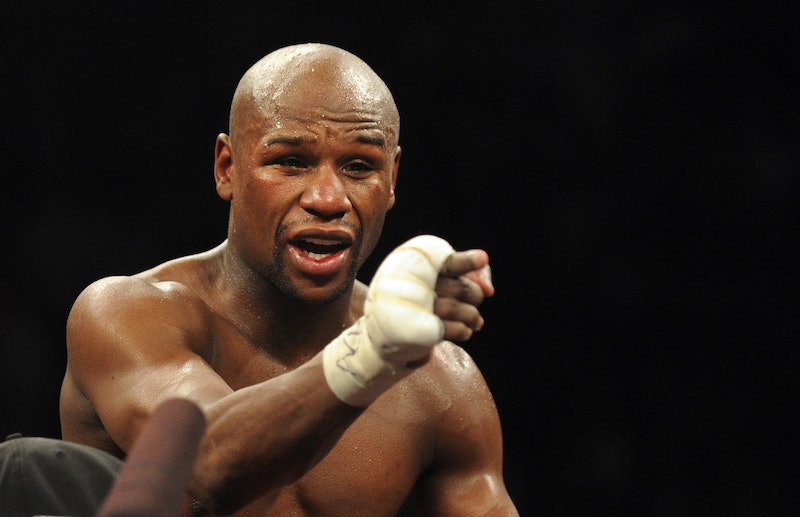 You probably already know that the "fight of the century" is scheduled to take place this weekend. On Saturday night, two all-star boxers are set to face off against one another at an arena in Las Vegas. The fight between Manny Pacquiao and the undefeated Floyd Mayweather has been receiving a ton of hype, but there is one essential aspect of the story that you may not have heard about: Mayweather's long history of domestic violence.

When Mayweather faces off against Pacquiao on Saturday night, he is poised to earn record-breaking cash — each man is expected to take home over $100 million. That's an insane amount of money, and no matter who wins, Mayweather will take home 60 percent of the revenue from the match. According to the fighters' contract, Pacquiao will receive only 40 percent of the earnings, though over $100 million is hardly a small number. The total is over twice as large as the previous biggest boxing payout, since contracts with sponsors are adding $13.2 million to the money generated by the fight.

Not only are tickets for the match going for an average of about $6,000 on StubHub, but you'll have to pay to watch the fight on pay per view — $90 to $100, more than I've ever paid to watch my own TV. Since about 3.8 million people are planning to do so, that means a ton of money piling up for the fighters, but you shouldn't necessarily follow the crowd. Instead, you can save that valuable time and money by reading about Mayweather's record of domestic abuse.

Mayweather has been accused of seven alleged assaults against five different women. He was convicted five times on charges dating back 14 years.

According to USA Today, Mayweather was first convicted in February 2001 of battery and domestic violence against Melissa Brim, the mother of his eldest daughter. In July 2001, he was convicted of battery again for hitting Brim. In August 2003, Mayweather was convicted of assaulting two women, friends of his then-girlfriend Josie Harris. He punched the women with a closed fist. Years later, that conviction was vacated and dismised.

Several incidents involved Harris, mother to three of his four children. In December 2003, he was convicted of assaulting Harris, but he was eventually found not guilty after Harris altered her story.

Mayweather told ESPN of the conviction:

If I really did what they say I did, beating a woman and stomping a woman — I'm Floyd Mayweather. They would have brought pictures out instantly. Still no pictures, no nothing.

When Katie Couric asked Mayweather about the charges brought against him over the years, he framed himself as a target for slander:

I’m black. I’m rich. And I’m outspoken. Those are three strikes right there.

Harris told USA Today of her relationship with Mayweather:

Mayweather did not comment to USA Today, but he later implied that Harris made up the entire story, because:

You know how women are sometimes.

Only a few years after he was released from prison, Mayweather was sued by another girlfriend, model Shantel Jackson. Court papers from the lawsuit allege that Mayweather twisted Jackson's arm and choked her while he forcibly looked through her phone. Later, he reportedly arranged for her belongings to be stolen and said she could only have them back if she came back to him. In another incident, Jackson alleges that he pointed a gun at her foot and asked, "Which toe do you want me to shoot?"

When ESPN questioned Mayweather about his convictions, he answered:

When it’s all said and done, only God can judge. But I don’t want people to miss this fight. This is an unbelievable matchup. Mayweather-Pacquiao. May 2nd. Be there.

Mayweather has claimed that since there is no photographic evidence of his attack on Harris, no one can prove that it really happened.

No pictures, just hearsay and allegations.

And as recently as this April, Mayweather completely denied having assaulted Harris, saying it "didn't happen":

That's not to say that if there were a video of his violence, Mayweather would admit to it. He passionately defended Ray Rice after video of Rice beating his wife surfaced online:

Oh yeah I seen the video. ... I think there's a lot worse things that go on in other people's households, also. It's just not caught on video. That's safe to say. I wish Ray Rice nothing but the best.

Even if Mayweather did not have such a storied history of domestic violence, his misogynistic remarks are enough to make you cringe. He posted this image on Instagram in 2013, claiming that some "females" are "asking to be disrespected":

For the record, even if Pacquiao wins, he isn't such a prize either: he has been quoted saying he thinks gay people who marry should be "put to death." So don't forget: if you choose to pay to watch the fight on Saturday night, it will definitely be dramatic, but nobody really wins.