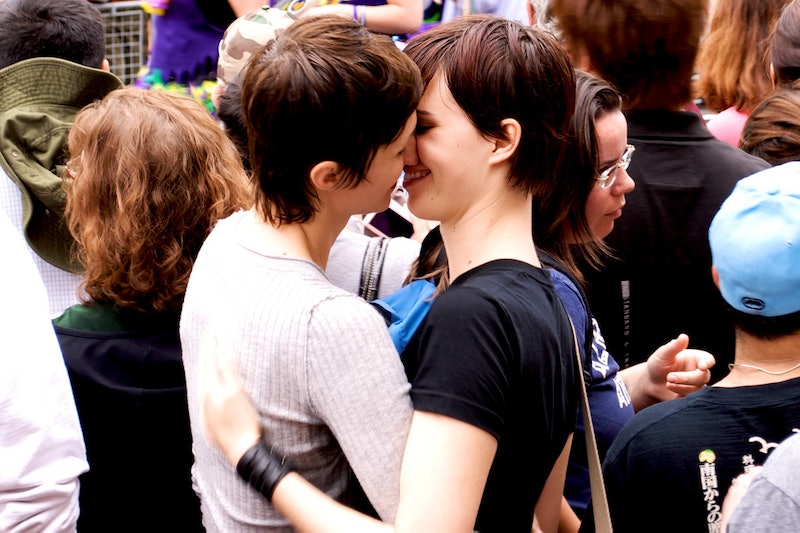 Not that it’s all that surprising, but women who have sex with women seem to be enjoying themselves more than women who have sex with men. A 2014 study by The Kinsey Institute found some interesting facts about lesbian sex, including that heterosexual women orgasm 62 percent of the time, whereas lesbians orgasm a whopping 75 percent of the time. While men, both straight and gay, still reign supreme when it comes to orgasm frequency, at 85 percent, what this means is that ladies who get it on with ladies have, quite possibly, the most satisfying sex lives. Although, as we all know, orgasms are not contingent upon great sex, they do help quite a bit.

With this knowledge at their fingertips, AutoStraddle decided to conduct their own survey in regards to the sex lives of lesbians. First, they received over 8,566 responses to their questions, 89 percent of whom were women between the ages of 18 and 36. Next, they analyzed all those responses and put them together in a gigantic report earlier this year, calling it The Ultimate Lesbian Sex Survey. Since then they’ve been releasing bits and pieces of the report. So, because it’s so massive, we’re breaking it down to cover the most interesting parts.

According to this survey, here are nine facts about lesbian sex that you may, or may not, have known.

2. The Majority Of Queer Women Have Sex Multiple Times A Week

When it came to the “ideal,” in first place, at 51.89 percent, responders wanted it multiple times a week, followed by 20.66 percent who wanted it at least once a day.

Although scissoring, for some reason, comes to the mind as the number one way in which gay women have sex, it’s not true. Of those surveyed, only 40.7 percent say that scissoring is a regular part of the sex lives. So, with that in our back pocket, we can finally put all our scissoring fantasies to bed, I guess.

In comparison, the average man lasts about 14 minutes during intercourse, so the likelihood of any dude, besides Sting, being able to have a sexual encounter that lasts more than 30 minutes is just, well, crazy talk!

6. Most Lesbian Women Have Never “Squirted”

It seems that monogamy sits well when it comes to orgasms, because 65.7 percent of those surveyed orgasm at least once every time they have sex, compared to 50.4 percent of those in non-monogamous relationships who do. However, in a very interesting side note, when it came to having an orgasm “almost every time,” singles, at 20.5 percent, faired better than those in monogamous relationships at 19.85 percent.

Not that it’s too groundbreaking that communication leads to better sex, but the survey found that those lesbian couples who talked about sex several times a month had an orgasm rate of 86 percent.

9. Those Who Orgasm More Are More Satisfied With Their Sex Lives

Of those surveyed, 76 percent who orgasm at least once during sex said they were “mostly satisfied” with their sex lives, whereas 54 percent who didn’t usually experience an orgasm could say the same. Although 54 percent is still in the majority, so that’s pretty awesome news.

More like this
Are Sagittarius & Sagittarius A Good Match? Astrologers Weigh In
By Kristine Fellizar
This Company Will Send STI Tests Right To Your Door
By Lexi Inks
How To Have A Hometown Hookup Without Catching Feelings
By Lexi Inks
I Tried Sex Magick To Tap Into My Inner Sensuality
By Brittany Beringer
Get Even More From Bustle — Sign Up For The Newsletter