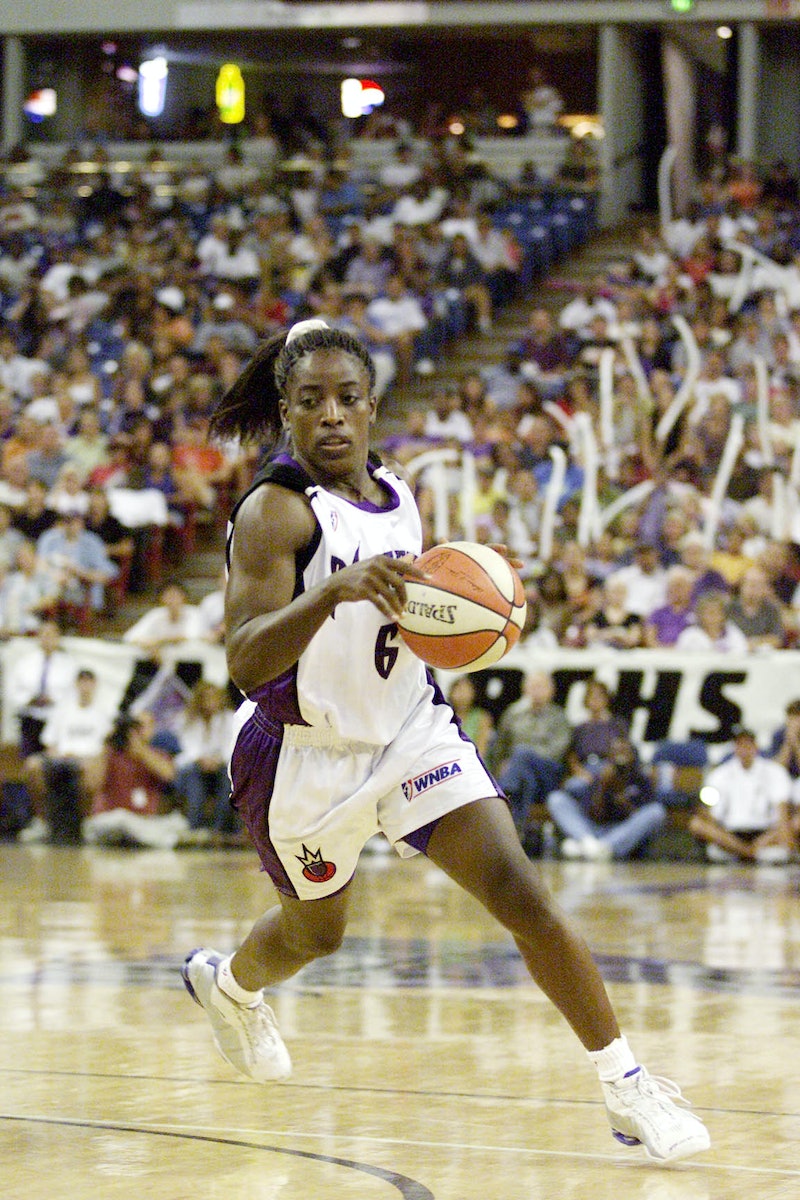 Looking at the list of domestic violence scandals among professional athletes — from Ray Rice to Andruw Jones to Jeff Taylor to Slava Voynov and even female athletes like Brittney Griner — it's clear that sports have a domestic violence problem. This isn't surprising; after all, domestic violence is unacceptably prevalent in society as a whole, and there's no reason to think that professional sports would be magically exempt. However, sports leagues' historic lack of action on the issue has undoubtedly not helped. The lack of harsh penalties for most athletes who have abused a partner spreads the message that such behavior is more or less acceptable, both to other players in the league and to the wider culture.

However, while this culture is a major problem (one that sports leagues are, finally, beginning to address seriously, even if their efforts are not quite what we'd all hope in more ways than one) it's still true that most athletes never abuse their partners. And while that fact certainly doesn't exempt sports leagues or individual sports teams from their responsibility to take domestic violence seriously, it's still important to remember that most players are not abusers — and to recognize those that actively speak out against domestic violence themselves.

Here are just a few athletes that have been proactive on this issue.

The NFL has been stepping in its efforts to combat domestic violence since the Ray Rice incident, and many players have been participating. For William Gay, however, the issue is very personal. The cornerback for the Pittsburgh Steelers lost his mother to domestic violence when he was seven, when his step-father killed her when she tried to leave the relationship. Today, Gay has partnered with Verizon's HopeLine, which allows people to donate used phones to victims of domestic violence, who typically can't use their old phones after leaving abusers. Gay recorded this video with Verizon just last month.

He also speaks at seminars about domestic violence, volunteers at a women's shelter, and generally tries to raise awareness about the issue. You can read a moving essay he wrote on the subject here.

Jillian Loyden, a former goalkeeper for Sky Blue FC, lost her sister Britton to domestic violence in 2012, and founded the Jillian Loyden Foundation to try to prevent other such tragedies. The foundation works to educate kids, from children as young as eight to college students, about healthy ways to handle conflict, warning signs of domestic violence, and what they can do to help victims. They also provide soccer programs for kids who have come from violent homes.

Loyden retired from soccer in 2014 in order to devote herself to raising her nephew, Britton's son, but has continued to speak out about domestic violence in sports, including urging the league to take domestic violence allegations against former teammate Hope Solo seriously. "Solo is my teammate and a personal mentor. But I cannot stand by as young fans receive the message that this behavior — even if the allegations proved to be inaccurate — can go unnoticed," she wrote of the case.

Joe Torre is a former baseball player and manager, a current baseball executive, and is even in the Major League Baseball Hall of Fame — but more importantly, he also has long been active in combatting domestic violence. Torre's father, a New York City police officer, was physically abusive towards his mother when Torre was a child. As an adult, he founded the Joe Torre Safe at Home Foundation, whose mission is “edu­cat­ing to end the cycle of domes­tic vio­lence and save lives.” He has spoken out about domestic violence in the past, and recently helped the league in creating tougher policies regarding players who abuse partners.

You can see him talking about his story in this video.

Sometimes one of the most powerful things you can do is simply tell your own story. Ruthie Bolton is a former WNBA All-Star and an Olympic gold medalist, who revealed last year that she is also a survivor of domestic violence. "I could do whatever I wanted on the basketball court, I could defend an opponent, or hit a big shot, but I couldn't get a grasp on my personal life," she said at the espnW Women + Sport Summit.

She spoke about length about the relationship, about trying to make it work and why she stayed for so long, and about her ultimate decision to leave. "I want people to see that abuse doesn't have a color or an age or a status. I lived through it and I'm glad I lived to tell about it," she said, adding that she hopes telling her story will help other people in similar situations. And indeed, more women using their platform to make it clear that victims of domestic violence can be anyone, anywhere — including very successful women — is a message the world needs to hear.

In addition to participating in the NFL's No More Campaign against domestic violence, Seahawks quarterback Russell Wilson has also started a campaign of his own called Pass the Peace, which encourages people to donate to the National Domestic Violence Hotline. Operating along the same basic principle as the ALS Ice Bucket Challenge, participants record themselves making a peace sign, make a donation to the hotline (even if it's only a few dollars), and nominate others to do the same.

"I want us to Pass the Peace to support victims of domestic violence," wrote Wilson at The Players Tribune. "The idea behind Pass the Peace is simple: It’s a promise. I’m sharing my love for you. I want to take care of you. I am here for you." He added, "As NFL players, we do not play a gentle game. But our hits, our anger, our aggressive behaviors need to be regulated and confined to the field."

So if you're considering supporting Mayweather in tonight's fight, think about throwing your support behind these other athletes instead.