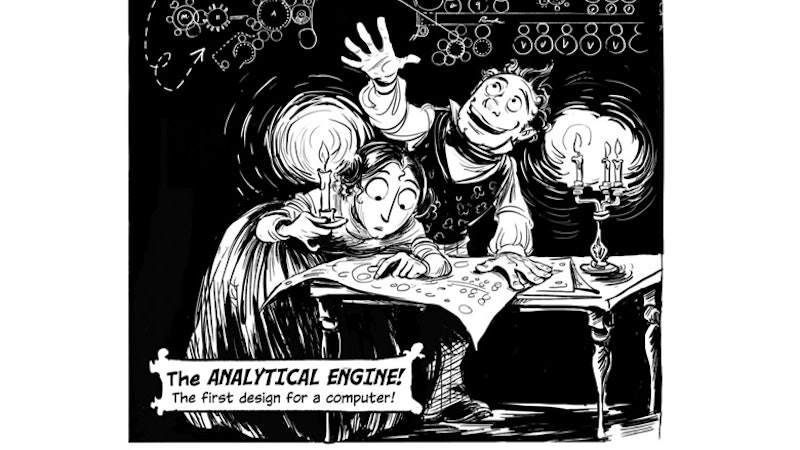 Silicon Valley has, for a long time, been a boys club, and there are definitely horror stories about the sexism and discrimination faced by women in the tech industry. Fortunately, there's a new generation of women who are advocating for women's empowerment in tech, like Karlie Kloss, who created a scholarship to help girls learn how to code, or Sheryl Sandberg of Lean In fame. But decades before Kloss and Sandberg, there was another female pioneer in computing: Ada Lovelace. There's even a whole day named after her to celebrate the achievements of women in STEM. But who was Ada Lovelace?

Sydney Padua, an animator and illustrator living in London, first heard of Ada Lovelace at a pub with her friend. Padua looked up Lovelace's biography on Wikipedia and was hooked. In an interview on NPR's Science Friday , Padua said, "I read this crazy story and thought this is just a wonderful story. Why haven't I heard of this?" So she drew off a quick comic of the origin story of Lovelace, who collaborated with Charles Babbage, a renowned mathematician, on his designs for an Analytical Engine. The Analytical Engine was the first design for a computer, to be powered by steam and controlled automatically with punch cards.

Unfortunately, Lovelace died of cancer when she was 36, and the Analytical Engine was never built. In fact, according to Padua's research, the first computers were not built until the 1940s, almost 200 years after Lovelace and Babbage's designed were published.

The Thrilling Adventures of Lovelace and Babbage: The (Mostly) True Story of the First Computer by Sydney Padua, $19, Amazon

This sad ending does not make for a fun graphic novel, though, so in her new graphic novel The Thrilling Adventures of Lovelace and Babbage: The (Mostly) True Story of the First Computer , Padua created a Pocket Universe in which Lovelace and Babbage actually built the Analytical Engine and use it to fight crime. (Because, duh.) Most of the adventures Lovelace and Babbage embark upon in the so-called “pocket universe” are made up, but Padua’s graphic noted is densely annotated so even the most absurd, fantastical stories are rooted in some primary source, and the reader learns so much about what Lovelace was like as a person and a pioneer.

Here are 7 things to know about Ada Lovelace, the badass Victorian woman and first computer scientist:

She Was An Enchanted Math Fairy...

Daughter of Lord Byron, the rockstar romantic poet who was once described a "mad, bad, and dangerous to know," Lovelace was always considered to be at risk for becoming a wild woman like her father. Her mother decided the best way to prevent these potentially dangerous, poetic thoughts from taking over was to flood her mind with math (although there was some tension over how much math was too much for the delicate female mind). Turns out, that was the best thing her mother could've done, because Lovelace was a genius with numbers. Her primary collaborator Babbage called her "that Enchantress who has thrown her magical spell around the most abstract of Sciences," which Padua rounds up to "enchanted math fairy."

…Who Wrote the First Paper on Computer Science in 1843.

Lovelace smashed any assumptions about limitations on her abilities as a mathematician and logician because of her gender. Babbage designed the Analytical Engine, a TK, and in 1840, gave a lecture on the machine at a conference in Turin, Italy. One of the conference's attendees Luigi Menabrea wrote down the lecture in Italian, which Lovelace then translated back into English. She then added seven footnotes to Menabrea's original paper, which were "a little over two and half times longer than the original paper." These Notes, as they're called, contain handwritten, elaborate, and complete computer programs, and Lovelace was one of the first people to understand that anything, from poetry to horse racing bets, could be turned into data.

She Had Some Famous Female Friends.

Lovelace surrounded herself with some pretty high-powered women, like Mary Somerville, the science writer and mathematician after whom Oxford's first women's college was named. Florence Nightingale, the pioneering nurse, wrote of Lovelace upon her death at thirty-six after a long fight with cervical cancer, "They said she could not possibly have lived so long, were it not for the tremendous vitality of the brain, that would not die." Lovelace is even mentioned in Queen Victoria's diaries, albeit briefly.

Victorian England was full of rules of behavior, especially for a lady of Lovelace's aristocratic status, but she hew to them. “It’s a bit ironic that Lovelace and Babbage find themselves icons of so fashion-conscious a scene as Steampunk," writes Padua in the footnotes, "as they are well documented as being two of the worst-dressed people of the 19th century. As one source says, ‘Lady Ada […] was extremely careless in her dress, not looking so well-appointed as her maid.’”

…Or Victorian Expectations of Women’s Behavior

Lady Lovelace was not exactly the most ladylike, by all accounts, and her wild reputation caught up with her later in life. She, “did swear while debugging: ‘… for it is damnably troublesome work, and plagues me.’ And when Babbage mislaid one of her notes: ‘I would almost be inclined to swear at you, you will allow.’" At the end of her life, she also really got into horse racing, an entirely un-ladylike "From subsequent investigations of various biographers, she seems to have lost something like £2,000.”

In addition to being involved in “some sort of murky scheme to take bets on horse races,” Lovelace also just really liked horses. Padua describes her as “a bold horsewoman,” whose favorite stallion “‘Tam O’Shanter… is very wild and looks quite vicious in the stables… I like him much the best when he is unruly.’” Lovelace was also a dog person, with a ton of hounds, most "notably a large spotted chicken chaser called Sirius.”

She Designed the World’s First Computer, Guys — and That’s a Biggie

Part of the reason Lovelace died in relative obscurity was not because she was a female mathematician (although that was a big part of it), but also because the thing that she designed a computer that was so advanced that no one could make it until decades after her death. We take it for granted now, but the thought that anything could be turned into data and summarily analyzed was totally revolutionary back in the day. And that ability to see the big picture through the mathematical minutiae is just one of the many characteristics that made Ava Lovelace so totally awesome.

The Thrilling Adventures of Lovelace and Babbage: The (Mostly) True Story of the First Computer by Sydney Padua, $19.68, Amazon

Images: Random House; Panels from The Thrilling Adventures of Lovelace and Babbage excerpted with permission of Pantheon Books, a division of Random House LLC. Copyright (c) 2015 by Sydney Padua. All rights reserved. No part of this excerpt may be reproduced or reprinted without permission in writing from the publisher.