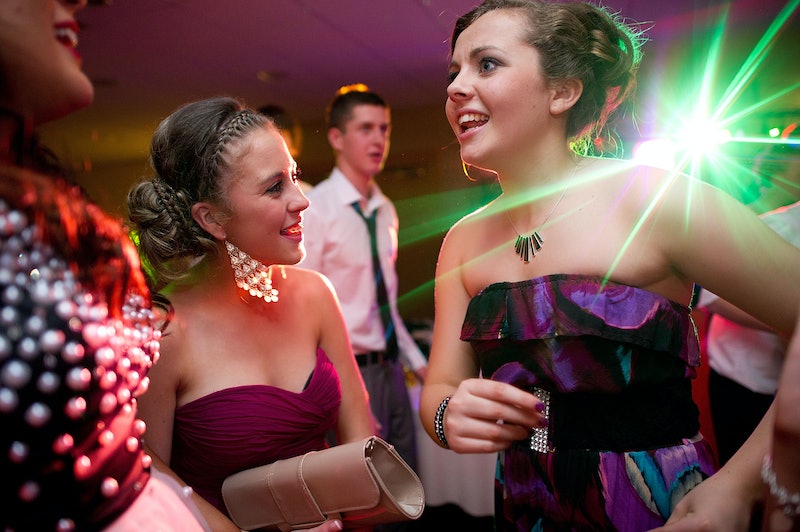 No matter where you go to school, prom is, unfortunately, prime season for sex shaming. Posters and campaigns spouting messages like “Make it a night to remember, not a night to regret” are usually targeted at woman, as are strict dress code for prom dresses. (Because, clearly, making decisions about sex is entirely a girl's responsibility, and hinges on her not wearing anything that might make the young gentlemen lose control of themselves.) Lincoln High School in Wisconsin had to remove its sex-shaming prom posters after the students at the school called out the posters for having an insanely problematic message. The poster illustrated the outline of a woman under the slogan, “A Night To Protect Her Character.” The woman was outlined with words like “classy,” “polite,” “tidy,” and “quiet.” I'm sorry, what?!

Kelsey Schindl, a senior at Lincoln High School, said that the poster "insinuates that if you do have sex, then you’re not going to have character. And there are no posters that say "protect his character."”

And she’s right—the posters are definitely reinforcing a lot of gender roles. But when she asked the principal if she could replace the posters with ones that weren’t so targeted at women, she was turned down. Though the school doesn’t support a particular religion, the posters were sponsored by The Crossing, a Christian unplanned pregnancy counseling center, and Holy Family Memorial, a Catholic health center.

According to the school district's superintendent, Marcia Flaherty, district officials thought the alternative viewpoint would encourage sex and not be appropriate. After the photo went viral on the internet and received a lot of heat, the school district released the following statement:

"The poster postings which have become the center of controversy did not promote any religious theme or institution and were not religious in content. Posters have been utilized for a number of years and, like past years’ messages, this poster was one of several merely intending to promote a positive prom experience. No particular religious standard or expectation was being promoted. Social media reaction has demonstrated that any message can be interpreted in a wide variety of ways, many never contemplated or intended to be part of the original message. The posters have been taken down and the school hopes that the focus of prom can return to what should be a positive social experience for our students."

The posters have since been removed because the school district didn't want the posters to the distract the students from prom, which was on May 2.

More like this
Black Women's Equal Pay Day Highlights An Upsetting Problem
By Brandi Neal
Chris Kaba's Family Continue Fight For Justice After Viewing Police Bodycam Footage
By Sophie McEvoy
Women Around The World Are Cutting Their Hair In Solidarity With Mahsa Amini
By Darshita Goyal
Here’s Your Daily Horoscope For September 26, 2022
By Mecca Woods
Get Even More From Bustle — Sign Up For The Newsletter