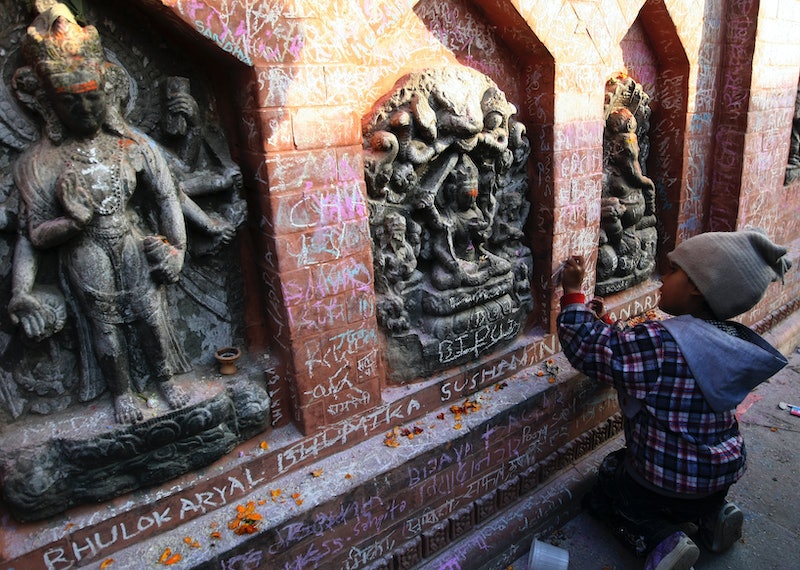 Only a day after Nepal’s authorities ruled out finding anyone else alive, three earthquake survivors were discovered in a remote village in the mountainous country, a government official said Sunday. The news comes eight days after a 7.8-magnitude earthquake struck the impoverished nation, destroying sections of the capital city and devastating Nepal’s infrastructure. According to The Guardian, a 101-year-old man was also rescued from rubble over the weekend. USA Today reports that the earthquake’s death toll hit 7,057 Sunday, although authorities have speculated that a completed count could reach 10,000.

The good news came courtesy of government administrator Surya Prasad Upadhaya, who told the Associated Press Sunday that two men and a woman had been rescued near Syauli village in Sindhupalchowk — a district particularly badly affected by the quake. “They are being taken to hospital for treatment,” Suraj Khadka, an officer in Kathmandu, told The Guardian. It is currently unclear on what day they were found.

On Saturday, 101-year-old Funchu Tamang was extricated from the rubble of his house. He was then transported by helicopter to a hospital in Nuwakot district (50 miles northwest of Nepal’s capital, Kathmandu), where he was treated for injuries to his ankle and hand. “His condition is stable,” local police officer Arun Kumar Singh is quoted by The Guardian as saying.

The rescues, long after the initial quake, came as a surprise — overturning Nepal’s authorities’ own bleak predictions. In Kathmandu, international rescue teams have been using sniffer-dogs and heat-seeking devices to locate survivors, while in remote areas the searches are being undertaken by local police. But on Saturday, Home Ministry spokesman Laxmi Prasad Dhakal told AFP, “I don't think that there is any possibility of survivors.” That afternoon, Al Jazeera reports that dozens of residents met in Kathmandu’s Maitighar Mandala Park to pray for the earthquake’s victims.

Also on Saturday, a 5.1-magnitude aftershock rattled the country — the latest in a powerful series of tremors that have kept Nepal's residents fearful and prompted a mass exodus from Kathmandu. “There are still villages where we know that all houses have been destroyed, but haven't yet been able to reach,” Finance Minister Ram Sharan Mahat said Sunday. “The aftershocks have not receded and we expect the final casualty numbers to climb much higher.”

In the days following the quake, Nepal has increasingly come under fire for its inefficient relief effort. Villagers in remote locations are growing impatient, as aid fails to reach them. “They [the authorities] are not suffering so they do not care,” Rashmita Shastra, a health worker in Sindhupalchowk told The Guardian Saturday. “They are just out to get the foreign money for themselves.”

Even as aid began to trickle into the country’s worst hit areas, the dire situations of these communities means that what relief is coming is too little, too late. “There are more than 13,000 people that haven't been reached, that we have no idea what's going on,” WHO Emergency Operations Manager Dr. Hyo-Jeong Kim told Al Jazeera Sunday, “so the most important thing for us is to make sure that we get help out there as soon as possible.”

On Sunday morning, USA Today reports that Kathmandu Airport — the country’s only international airfield — was closed to large planes bearing aid, because the runway was overwhelmed by the heavy traffic. The U.N. complained Saturday that customs delays at the airport were holding up the delivery of crucial aid. U.N. humanitarian chief Valerie Amos told AFP that Prime Minister Sushil Koirala had previously committed to speed up the process. “He has undertaken to ensure that happens, so I hope that from now we will see an improvement in those administrative issues,” she said.

Earlier in the week, the U.N. launched a $415 million emergency appeal to assist the earthquake relief effort. Eight million people have been affected by the quake, the organization estimates, while 1.4 million require food aid and 600,000 homes have been destroyed or damaged. Water, food, sanitation, shelter, and electricity are all in short supply and desperately needed.

If the death toll does eventually reach the predicted 10,000, the earthquake — which struck last Saturday — will be Nepal’s worst-ever disaster, surpassing a previous massive quake in 1934 that killed 8,500.