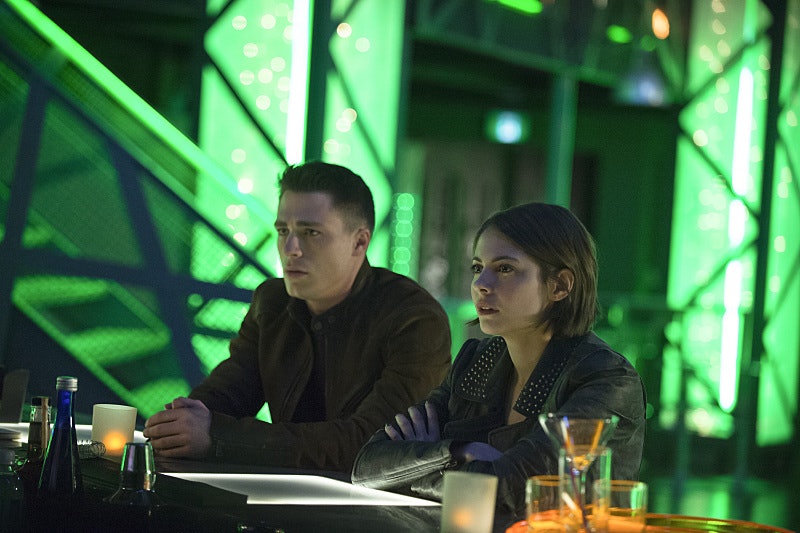 Since the moment that Roy Harper snatched Thea Queen's purse in Season 2 of Arrow, these two crazy vigilante kids have been one of Starling's best on-again, off-again couples. Season 3 has seen them mostly in off-again mode, with Thea unable to get over all of the lies and half-truths that Roy fed her as he became increasingly involved with Team Arrow. But even when not together, they have never been that far out of each other's romantic orbit. Everything was actually looking pretty darn good for these two just a few weeks ago, as they finally got over their issues and got back together. Unfortunately, it seems like they were just building us up to break us down. With Roy's dramatic fake death followed quickly by his leaving town the word finally got out about Colton Haynes is leaving Arrow. All hope seemed lost for these two, until last week when Felicity finally gave Thea the good news (a crazy rare thing for her) that Roy was alive and well. She even gave Thea a push to go be with him. While all signs (and Arrow promos) suggest a reconciliation, I don't think that Roy and Thea will get back together.

Thea has a ton of guilt right now over Oliver abandoning the city — and the team — to save her life. She's also spent months training with her super-villain father on how to fight and defend herself, and has finally started working with Team Arrow (minus the Arrow). At the end of the day, I don't think she'd be willing to leave Starling City. In fact, I think she is this close to picking up the mantel as Arrow's newest superhero: Speedy.

As much as I would love for Thea to live happily ever after with Roy (she's had a rough couple of years), she has a lot more to do in town. Additionally, we have the cold hard facts to look at here as well. Executive producer Marc Guggenheim told TV Line that there "will be more consequences" to Thea's Lazarus Pit storyline, and we can't exactly see those if she is starting a new life somewhere else with Roy. While we will have a reunion, I think it will be more of a bittersweet farewell. Guggenheim revealed to ET Online that Roy would return to Arrow to wrap up unfinished business.

I'm glad they will be getting some closure, even though I wish that Roy would stick around forever. Watch the preview below to catch a quick glimpse of Roy and Thea's hot reunion, and brace yourself to say goodbye, one last time.