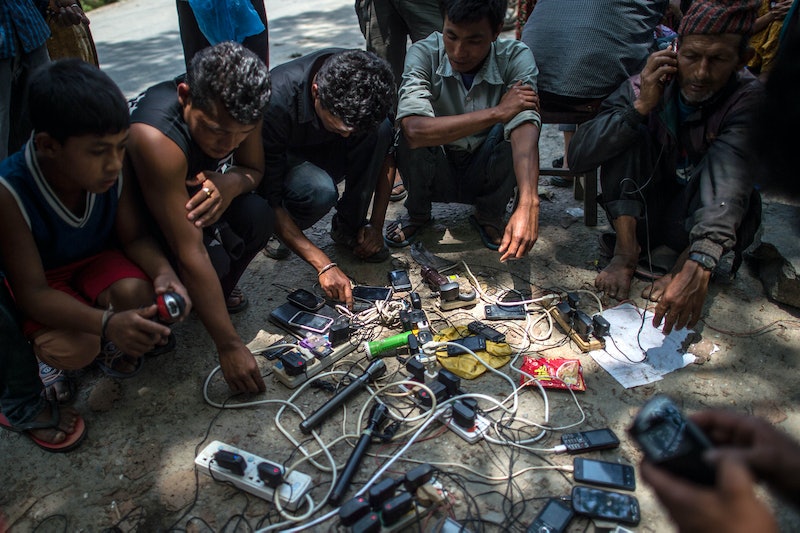 Since a magnitude 7.8 earthquake ravaged Nepal and left more than 7,000 people dead, gathering information about survivors has proven tantamount but difficult. Technology has become more important in Nepal's recovery and safety efforts after the earthquake affected access to communication. Survivors are still being pulled from the rubble, and it's difficult to get information about what resources and support are needed since the local phone network "has been sporadic at best," according to NPR's Kirk Siegler, who is located in Kathmandu. Companies including Facebook, Skype, Viber, and Google have either waived their international calling fees or teamed up to make survivor location easier, according to NPR, and "crisis mappers" are making it easier for rescuers to deliver support, according to The Atlantic.

Most recently, BBC News teamed up with Viber to launch an account on the messaging app that will publish news, information, and tips for staying safe through recovery efforts, according to NiemanLab. BBC World Service and BBC Nepal Service have already added additional broadcasts and information online about where people can get aid and other government updates on the status of relief operations. BBC World Service mobile editor Trushar Barot told NiemanLab that the Viber account is supposed to complement those broadcasts and will focus on safety tips and how people can protect themselves in the event of aftershocks.

“We just want to try and get as much useful information to people in the affected area as possible through any means at our disposal,” Barot told NiemanLab.

Barot said most messages will be text-only because of the limited data coverage in Nepal. Viber users can subscribe to public accounts like the BBC account through the app's Public Chats service, according to NiemanLab.

In late April, Viber also revealed that it would switch off its Viber Out billing for international calls so that anyone calling into or out of Nepal wouldn't be charged, according to Mashable. Microsoft also announced that all Skype calls to landlines and mobile phones in and out of Nepal would also be free, and AT&T, Sprint, and T-Mobile also waived fees for calls and texts messages sent by users in Nepal through May 15. Google has also reduced prices for Google Voice calls into Nepal from 19 cents per minute to 1 cent per minute, according to NPR.

According to a post on Google's Asia Pacific blog, the company chose 1 cent calls instead of free calls so spammers couldn't abuse or flood their systems. Unfortunately, Google Voice is only available in the United States, but people outside the country can make calls at 1 cent per minute using the Hangouts Dialer on an Android phone, using Google Hangouts, or from Google Talk, according to Mashable.

Google has also launched a "Person Finder," which crowdsources information about people in affected areas to help people find out if their loved ones are safe. Facebook also activated its "Safety Check" feature, which uses your location to determine if you've been affected by a natural disaster. It will then send you push notifications asking if you're safe, and when you confirm, it sends a notification to your friends. NPR said the feature might not be as useful in Nepal, where the World Bank reports that only 13 percent of people have Internet access.

Rain soaked Nepal after the earthquake hit, according to The Atlantic, soaking those without shelter and — even worse — making them impossible to find from above. Apparently, whenever there's a natural disaster, a team of "crisis mappers" from around the world springs into action. The crisis mappers are a team of volunteers who use who use crowdsourcing tools to access satellite data and turn it into digital maps, which then helps with rescue and humanitarian decision making, according to The Atlantic. The Humanitarian OpenStreetMap Team (HOT) mapped the pre-typhoon roads of Tacloban, Philippines, after Typhoon Haiyan struck and also helped map the rural infrastructure of Guinea and other countries that were hit in the Ebola outbreak.

Volunteers for HOT told The Atlantic that Nepal's mapping is the team's best ever, and that it helps improve outcomes for international relief organizations on the ground by assisting them in finding communities and delivering food, shelter, and supplies to the ones that need it most. Crazily enough, this thorough mapping happened all as the result of open-source magic.

The OpenStreetMap database is free and can be edited by anyone, but the highest-resolution satellite, WorldView-3, is owned by a private American company called DigitalGlobe. The satellite captured the first photo of post-earthquake Nepal the day after the earthquake hit, and DigitalGlobe open-licensed the imagery that night. Other major satellite providers followed suit shortly after and opened their images of the damaged country. Dale Kunce, a geographic information specialist with the American Red Cross, told The Atlantic that mapping throughout the Nepal crisis has made a huge difference in aid efforts:

It’s everything from, ‘Hey, I need a map of this small area,’ to ‘I need a map of the region that shows Delhi and China and Kathmandu, because we need to figure out if we should start driving cars in. [The HOT teams] have a much better understanding of what is actually happening on the ground.