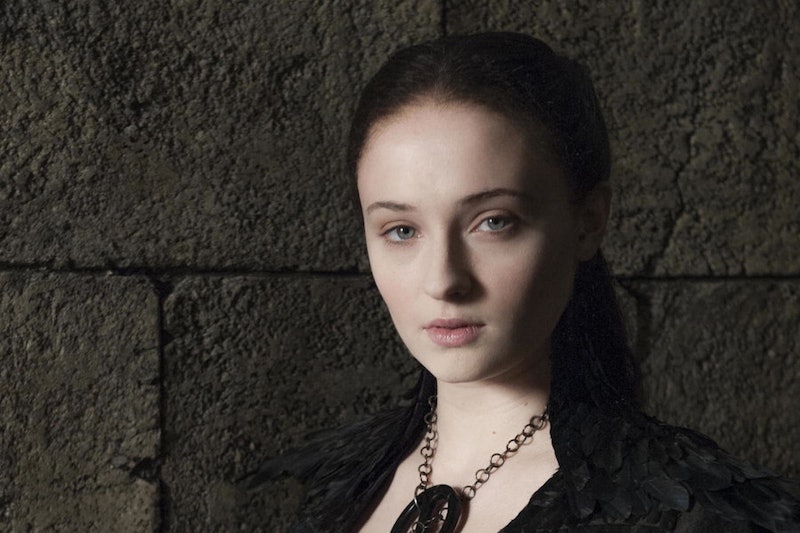 We all know this is the year of the women on Game of Thrones , but with the power constantly shifting from week to week, it's hard to keep track of just who's going to come out on top at any given time. As things stand at the moment, it seems that Sansa and Arya Stark that hold the greatest potential to restore the Seven Kingdoms to some semblance of peace. After everything they've been through — and though they remain separated with no knowledge of the others' whereabouts — each of the girls are in positions that could prove advantageous if they play their cards right and if luck happens to be on their side. All being well (though let's be honest, when is all EVER well in Westeros?), Sansa or Arya — or both of them, together or separately — could end up saving everyone's bacon.

Currently, Sansa is back in Winterfell, promised to marry Ramsay Bolton — a plan hatched by Baelish in order to avenge her mother Catelyn's death which could potentially lead to her taking back Winterfell. As for Arya, she's finally ready to learn how to be Faceless from Jaqen H'ghar in Braavos, having escaped the tragedy back in Westeros... for now. What will happen is anyone's guess, but how amazing would it be if — in what would likely be a diversion from George R.R. Martin's books — Arya & Sansa saved the day?

Here are 7 things Sansa and Arya would need to do if they want a chance to make things right.

Arya will need to go back to Westeros

Arya needs to complete her training with Jaqen H'ghar, of course, as it'll likely come in handy down the line and help protect her from the dangers she must face, but eventually — though it's likely the last thing she wants to do at the moment — she will have to leave Braavos and go back to Westeros.

Sansa will have to get rid of Ramsay, his father Roose, and all of their people

Sansa's going to go through with her wedding to Ramsay, that much is sure, but she'll need Baelish's help to gather troops and whoever else that might help her defeat the whole lot of them, leaving her as Warden of the North. Sansa has seen enough death at this point in her life, so it shouldn't be such a difficult pill to swallow to watch the Boltons and their supporters cut out.

Arya must help Daenerys take back the Iron Throne

I know, I know, this probably sounds like a terrible idea, but it's not, if you really think about it. Even Tyrion Lannister would like to see the Mother of Dragons assume her rightful title in King's Landing. What we do know is that Tommen Baratheon has no real claim to the throne, but as long as he's in it, the wrong people are still in charge. Arya has no claim to the throne either, but if Daenerys does, it could bring about great change in the Seven Kingdoms and perhaps restore the North to the Starks.

Sansa will have to get rid of Baelish eventually

Baelish is creepy as all get out and I don't trust him for a single second. While he held an unrequited flame for Sansa's mother Catelyn for years and claims to want the best for Sansa, I have the feeling that's only true so long as it serves him. Baelish is somewhat powerful and can come in handy when it comes to helping Sansa get rid of the Boltons, but after that, he's gotta go. That's right, more death!

Arya needs to reunite with Sansa

This doesn't really need explanation, but as the two surviving members of the Stark family (I mean, besides Jon, which... you know), these sisters desperately need to get back together, compare notes, and join forces to take back the North once and for all.

Sansa must use her alliance with Margaery to her advantage

Margaery isn't going to take too kindly to having her position as Queen compromised if Tommen is removed from the throne, but it has to happen. That being said, she'll kinda have to go with the flow, because it's not as if there's an army behind her. Sansa can use the bond she formed with Margaery to keep the peace and perhaps offer her a loftier position in the North after she takes over.

Together, Arya & Sansa must remove Cersei Lannister from the picture

Cersei's powers have already waned considerably, and she might get sent off to Castle Rock if she doesn't play her cards right. With Maragery as queen, her father dead, her brother/lover Jamie a lot less evil than her and Tyrion off in Braavos, she wouldn't really stand a chance if someone truly challenged King's Landing. I love her, but she's gotta go.