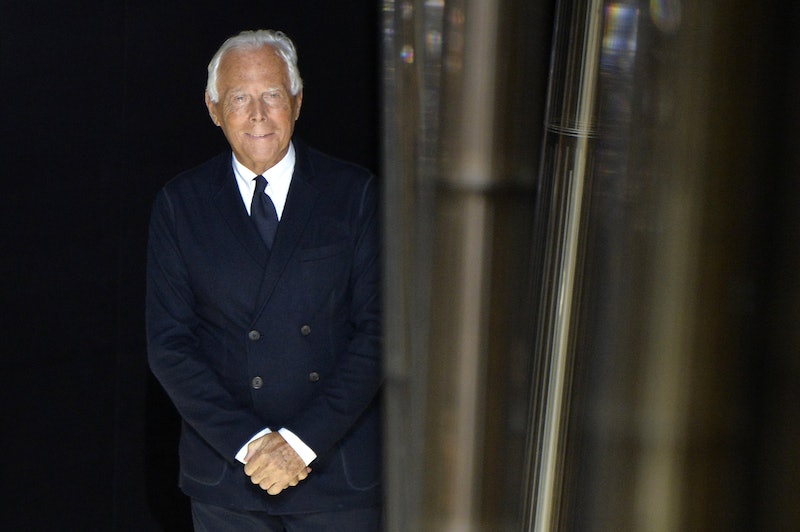 The legendary Giorgio Armani celebrated 40 years as the namesake to his Milan, Italy-based fashion house on Friday night. The designer, mostly known for his clean-cut and perfectly tailored menswear line, hosted a star-studded gala that included VIP guests like Leonardo DiCaprio, Cate Blanchett, and Glenn Close. The couture and everyday-wear brand officially launched in July of 1975 after years of Giorgio working in the industry — a long-spanning career that eventually led to his focus on an independent line.

The evening of celebration featured a tour of the brand new Armani/Silos, the museum that exhibits some of his most iconic pieces and generally honors the span of Giorgio Armani's career, which also debuts to the public this month. After that, the A-list celebrity guests were also treated to a fashion show from Armani's Prive collection, which is Giorgio's couture line, featuring gowns perfect for the red carpet. And there's no doubt we will see some of the dresses that were featured on this special runway at some of next season's award shows. Especially for Prive lovers like Penelope Cruz and Cate Blanchett.

The museum tour and fashion show precluded a celebratory party, of course, for all the Armani devotee's to enjoy each other's company and check out all the fabulous looks each of the guests was wearing.

The night was sure to be one of the classiest as far as style goes. Armani is known for his minimalist and sharp-dressed styles without too much frill, which highlight that understated but nonetheless fabulously chic look he produces time and time again. There were lots of classic black and white suits (on both male and female attendees) as well. While it wasn't a night to be wild and adventurous in terms of dress, it was the perfect occasion to exemplify the legacy of classic and timeless looks created by Armani.

The fashion world will no doubt continue to pay tribute and celebrate the Armani brand during the rest of this year. The 80-year-old designer will also release an autobiography in September.