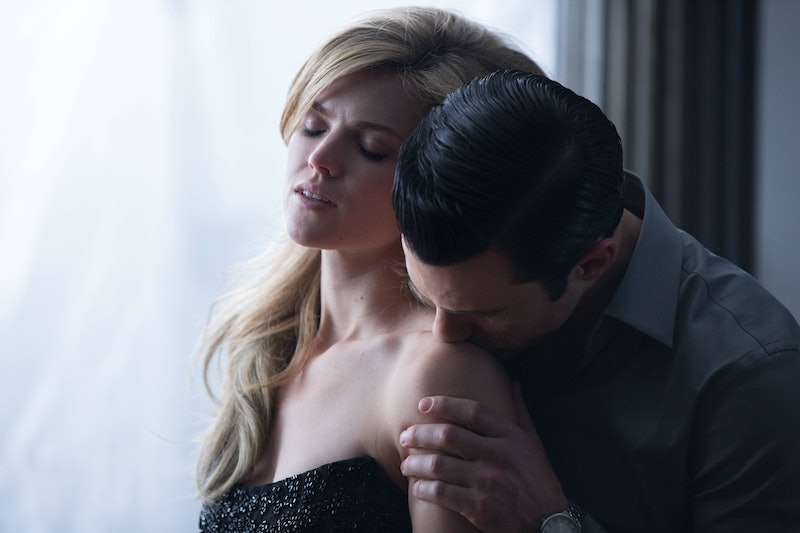 For those Gotham fans who are more interested in the character relationships than gunfights, the Season 1 finale could prove to be a huge episode. Will Barbara and Jim get back together in the Gotham finale? I think it's possible thanks to creator and executive producer Bruno Heller teasing that Jim, Leslie, and Barbara are in the middle of a "love triangle" to Entertainment Weekly's Spoiler Room. He described his plans for the series finale, dropping hints about what will happen to Barbara and Jim in the finale. “That is going to bear bitter fruit big time. The audience knows a little more about what’s going on in that love triangle than Gordon or Leslie. They’re going to pay for that ignorance.”

As a fan who's been enjoying the Jim/Leslie relationship, that quote is enough to make you panic, right? It seems like Gotham, even though it's making an effort to distinguish itself from the DC Comics canon, is sticking to the original story of Barbara Kean and Jim Gordon eventually ending up together and getting married by the time Jim becomes Commissioner. And while I don't disagree with that as an endgame for the characters, I do think the Leslie love story has been shortchanged if it will end in the Season 1 finale. She's such a charming and likable character, but she hasn't been given much to do other than smile and tell Jim that he's doing the right thing. You know what, if they have to split up, I kind of hope that she dumps Jim for being such a wet blanket half the time. He is not the best at being flirty, either.

And I still think that the best thing that could happen to Barbara at this point is to spend some time in therapy. She just went through a highly traumatic event, which included her being involved in the deaths of her parents, who may have been jerks but seemed like pretty innocent people. That was closely tied to her feelings for Jason Lennon, the Ogre, who terrified her because he was a twisted murdering sociopath, but intrigued her at first, because he paid attention to her instead of ignoring her, like almost everyone else.

I don't want to see the end of the season just pick up right where Season 1 started, with Jim and Barb living together in that clock tower penthouse. I'd greatly prefer that we resume with Selina and Ivy sticking around as her occasional houseguests while she learns how to live on her own and continue working on her substance abuse issues. She's already had the will to live from her encounter with the Ogre. Now I just hope that can translate into the will to work on herself before getting back together with Jim.