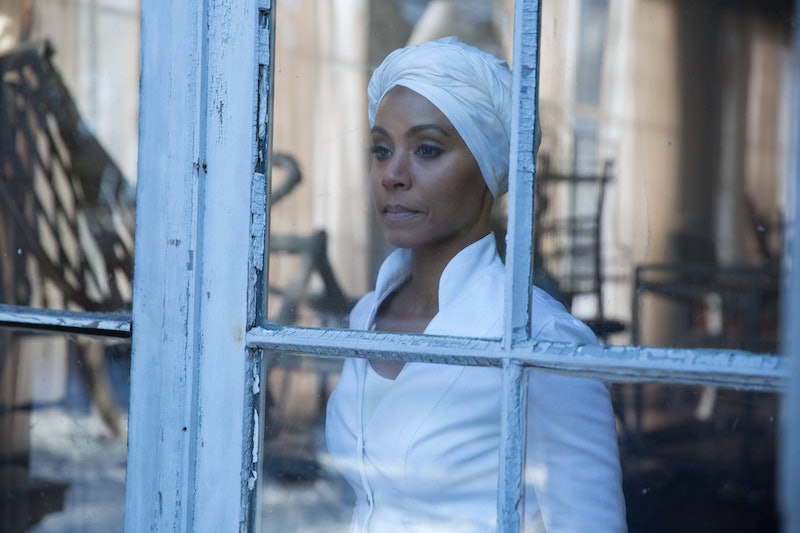 Gotham has built a series of rivalries that are all coming to a head in the Season 1 finale, from Maroni and Penguin to the cops and Falcone, but what side is Fish Mooney on? It's not as simple as it might appear. She's entering a mob war that has a bunch of different sides that have shifted since she was sent away. And while we already know that Jada Pinkett Smith won't be returning for Gotham Season 2, it could affect how successful she'll be at joining the fight or what side she's on. When we last saw her on the show, it seemed like she might be on death's door, because she was shot while trying to escape from Dr. Dulmacher's (aka "the Dollmaker") prison island. She rallied the victims, stole a helicopter, somehow knew how to fly that helicopter, and flew off with them back in the direction of Gotham City, but that stray bullet seemed to put a huge wrench into her plans.

Now that it seems like she's recovered — we can see her walking confidently in the season finale trailer below — she very well could just be out to screw with everyone and take all of the money and power that she can. But that's not usually Fish's gig. She's been a shrewd game player since the very beginning, and even gouged out her own eye as a part of her plan (in one of the grossest moments of the season). Getting shot, though? Didn't seem like it was a part of her master plan, and could explain why it's taken her and her crew so long to arrive. But now that they're back, where will they pledge their allegiance?

Could Fish join in to fight with Falcone, even after all that betrayal? She's been in support of the status quo before, with the head underling rising to become the chief officer of the crime family. She was rushing the process by trying to take out Falcone, and she did swear she was going to kill him a dozen episodes ago.

Joining Up With Penguin

Penguin has proved that already, even as a young man, he's the best player to ever enter the organized crime scene in Gotham. Literally everything he does has a double cross or a trick attached, and maybe Fish will join him just to be on his good side.

It seems like Maroni is going to come for the Penguin, and since Fish has a grudge against him, she might be able to get over her Falcone family instincts and help him attack her former mob family. But in the trailer it looks like Maroni and Penguin are working together, and who knows if Fish will be willing to participate in that alliance.

Saying "Screw It" & Trying To Ruin The Whole System

I think this is possible only because Fish has displayed a renewed desire to help the helpless, with her refusal to truly work for the Dollmaker, as well as her decision to rescue his victims rather than the buff thugs who would have helped physically protect her. She also proclaimed herself "queen" in the brief trailer clip.

Trying To Help Jim & The Police

This would come as a surprise only because Fish isn't really a law and order type. Even when she's agreed that Falcone has overstepped his bounds or when she was furious at Penguin's betrayals, she never tattled to the cops.

But that was all before everything that happened with the Dollmaker. We might see a whole new side of Fish Mooney when she returns to Gotham on Monday night.