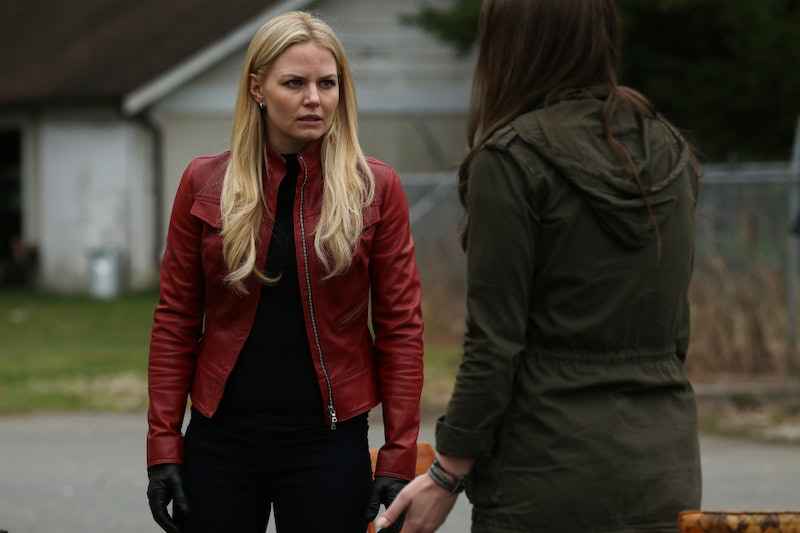 We're finally going thereon Once Upon a Time— the villians and the heroes are finally swapping places. On Sunday night's episode, "Mother," Rumplestiltskin and The Author gave villains their happy endings on OUAT . And it's not going to be easy on any of the heroes we've grown to love. The Author cracked open Heroes & Villians on Sunday, at Rumple's request, and began rewriting the story — turning the heroes into villains and the villians into the heroes they've always challenged. And, if the preview for next week's two-hour OUAT Season 4 finale is any indication, things in Storybrooke are about to get seriously messed up.

It should've been easy enough to predict that this opposite-day effect would be necessary for the villains to get their happy endings — I mean, all magic comes with a price, after all. If we've learned anything from Rumple by now, it's that major detail of magic. But this really does change everything for the series, especially when we consider that the switch is going to happen during the Season 4 finale. Will the villains and the heroes be stuck in these places forever? And where does Regina factor into this, now that she's got her happy ending?

But those aren't even the most important questions we should have for this big OUAT switch. In the preview for Sunday's episode, we only saw glimpses of what the heroes would be like if they were evil in the Enchanted Forest — we didn't see Storybrooke at all. Is it possible that Storybrooke no longer exists? It'd make perfect sense if it didn't. If Regina were never evil, then she never would've cast the curse that sent everyone to Storybrooke in the first place. Sure, it's entirely possible that, because Snow's evil seems to mirror Regina's in the preview, that she will cast the curse in this parallel universe, but it's also possible that she doesn't. Can OUAT go on without Storybrooke? Sure, there are stories to tell about these characters from this side of things, but is OUAT really going to leave Storybrooke behind? I'm sure we'll return back there soon enough.

More like this
Who Are The 6 Illuminati Heroes in 'Doctor Strange 2'?
By Grace Wehniainen
Grey's Anatomy Fans Refuse To Accept Kaimelia's Shocking Relationship Update
By Brad Witter
Oops! The 'Stranger Things' Monopoly Game Has Spoilers For Season 4
By Alyssa Lapid
20 Photos From The 'Stranger Things' Season 4 Premiere To Make You Feel Old
By Alyssa Lapid
Get Even More From Bustle — Sign Up For The Newsletter