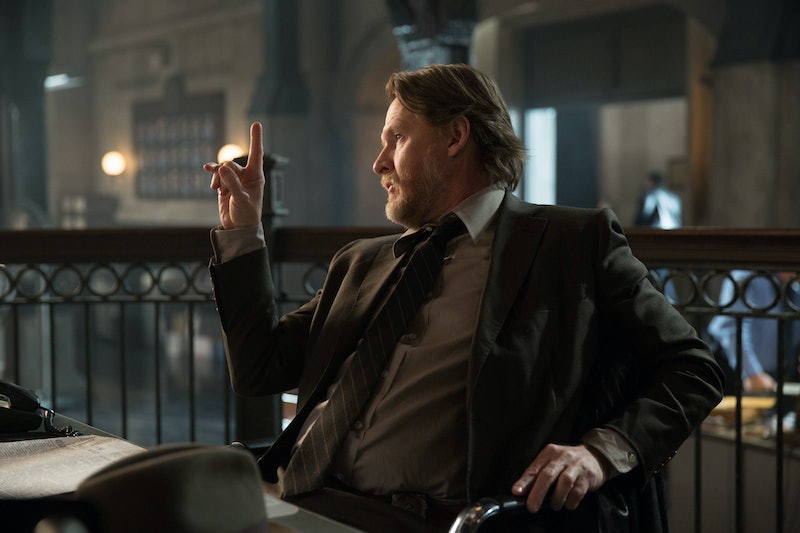 It's time for some real consequences on Gotham , and the Season 1 finale is just the place for them. The series has been just as violent and bloody as I'd hope that one about the ultimate fictional den of corruption would be, but so far, all of the major players are still standing. The stakes need to be raised. Dramatic tension eases when it feels like every character with more than a few lines an episode is safe. It seems like I'm getting my wish with the show's finale episode, "All Happy Families Are Alike." Executive Producer Bruno Heller told TV Guide that thanks to the big, ol' fun-time gangster jamboree that the plot is clearly building to, someone will die on Gotham . "It wouldn't be a real showdown if everybody walked away from it, would it?" he said. Sounds to me like the audience's tentative sense of security is going to be demolished, and I'm so on board.

But whose head is on the chopping block? The easiest answer is Fish Mooney, since Jada Pinkett Smith has already revealed that she won't be returning for Gotham Season 2. Fish also has her well-manicured hand in everything; more than half of the city would rather see her in a body bag than in anything else.

So, yes, Fish is obvious. Too obvious, in my opinion. Maybe she'll ditch Gotham forever, but I believe she'll do it on her own terms. This lady seems un-killable. No, my pick for this season's lucky sacrifice is none other than Jim Gordon's partner and Fish's occasional lover, Detective Harvey Bullock. Crushing, I know. I didn't say I was happy about it.

Having the DC canon available kind of feels like cheating. But it's there, and because of it, I know we're not going to lose any of the pre-villain villains that Gotham has put so much time into developing. If Selina or Edward dies, for example, the writers are lopping off an entire potential storyline in one fell swoop. Harvey Bullock does have a comic book history, but it's a shifting (and shifty) one. Sometimes he's corrupt; sometimes he's bumbling; sometimes he's on Jim's side; and sometimes he's not. So the show can pretty much Choose-Your-Adventure Bullock's fate, and to me, taking him out makes the most narrative sense.

Recently, we've seen both women in Jim Gordon's life in imminent danger. This teases Jim being dealt an emotional blow that will harden him further. What if the loss wasn't a lover, but a trusted friend? Bullock was Jim's door into Gotham's seedy underbelly; now that Jim has that access, it would be symbolically appropriate for his guide to be retired.

Barbara isn't going anywhere, and neither is Leslie. Jim is going to lose Harvey, and with it, a partnership that was well fought for. It will be the true end of Gordon's innocence. Bullock's death will change Jim entirely and set the show up for an even darker second season. (Yay!) Like it or not, Gotham has to jettison someone who's absence will really be felt.

More like this
The 'This Is Us' Finale Featured An Adorable Season 1 Jack & Rebecca Easter Egg
By Grace Wehniainen
'Gentleman Jack’s Cast & Crew Are Keen On Season 3, Too
By Frances Stewart
The 'It's A Sin' Creator Revealed A Massive Detail That Didn't Make The Final Cut
By El Hunt
Grey's Anatomy Fans Refuse To Accept Kaimelia's Shocking Relationship Update
By Brad Witter
Get Even More From Bustle — Sign Up For The Newsletter