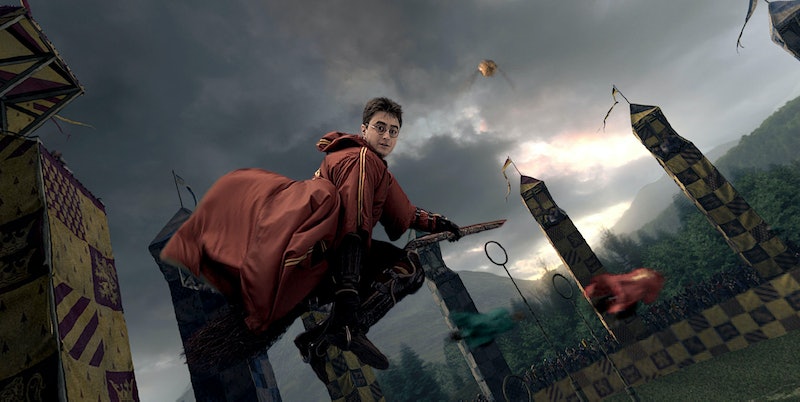 Stop playing beer pong. If I ever see someone playing beer pong again, I will pong them right off the planet. Beer pong shouldn't even cross your unworthy Muggle mind again now that we know that Quidditch beer pong exists, and it is, if possible, better than the magic of Quidditch and the magic of beer pong combined. I'm sincerely crying a small tear that this didn't happen before I finished college, but them's the breaks. At least now that we all know it's real we can take advantage of the time we've got (or just pull a Hermione and Time Turner our old sauce selves back to our co-ed days).

OK, listen up, everybody, because I just elected myself the Madame Hooch of the internet and as such I am taking my Quidditch pong teaching very seriously. No goofing around with Remembralls on my watch. First off, you should know that there is an unofficial Quidditch pong league, and they are the drinking Aurors behind this magical game. They sell the products for it online and have come up with an extremely comprehensive list of Quidditch pong rules.

Here is how you too can become the master of your own destiny:

10 cups in a pyramid on each side full of beer. This isn't your first beer pong rodeo, so you dig. But STAY WITH ME. It's going to get way cooler.

2. Add three hoops to the middle of the table

They're available for purchase here, along with a two bats and a snitch, which you will also need to play this game the way it was meant to be played.

3. Designate one of the cups as the "Snitch" cup

The snitch cup should be moved away from the table, but not at a completely impossible distance. May the odds be ever in your favor.

You get to decide which house your team is going to be, and you have to choose carefully, because there are unique advantages to each of them. You can cast each of these spells one time per game, depending on your house. For your consideration:

5. Designate a seeker and a beater on each team of three people

The beater will be the one holding the bat, trying to block shots. The seeker will (duh) be going after the Snitch cup.

May you bring honor to your house.

More like this
Rupert Grint Just Shared A *Major* Update About Ron Weasley’s Future
By El Hunt
11 Super Bowl Instagram Captions To Use On Game Day — Even If You Don’t Like Sports
By Alexis Morillo
The 2023 Super Bowl Commercials Feature A 'Breaking Bad' Reunion & Missy Elliott
By Alyssa Lapid
Flip Phones Are Gen Z's Favorite New Nightlife Accessory
By Maria Santa Poggi
Get Even More From Bustle — Sign Up For The Newsletter
From hair trends to relationship advice, our daily newsletter has everything you need to sound like a person who’s on TikTok, even if you aren’t.