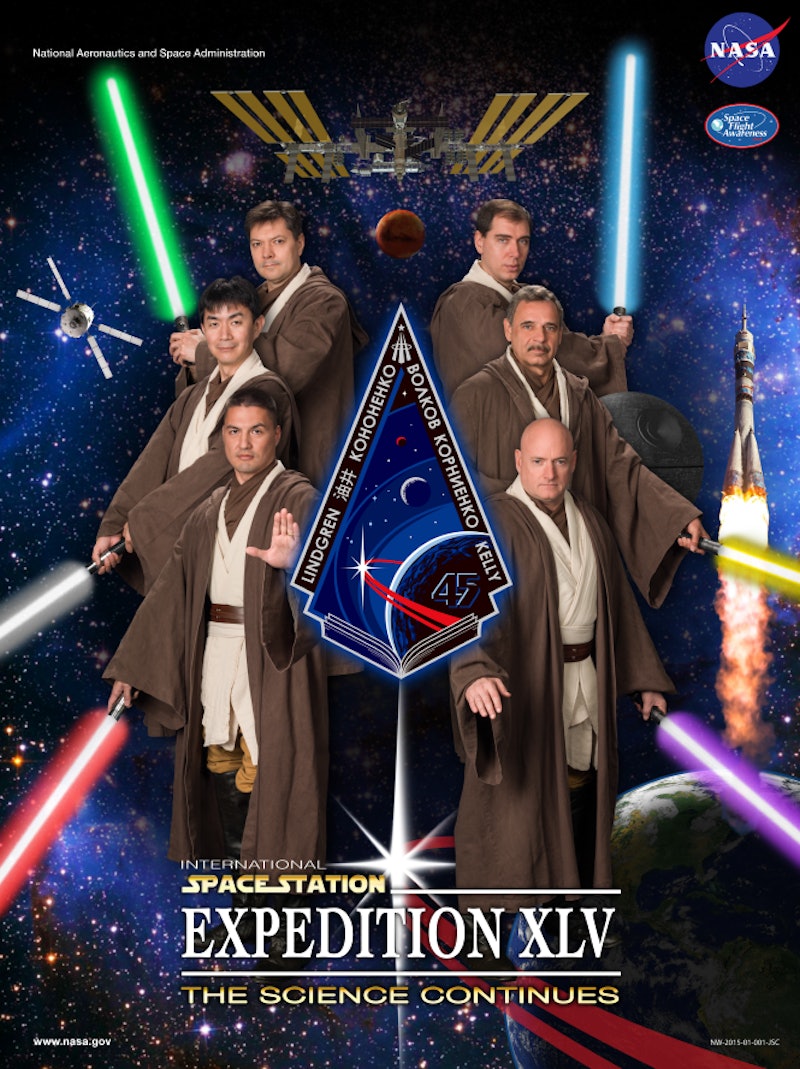 Nobody knows how to bring in May 4 (for full effect, try saying "May The Fourth" super-slow out loud) better than NASA. And, OK, this glorious mash-up of Star Wars and NASA astronauts and everything weird and wonderful actually appeared for sale on NASA's website in mid-March, but it's worth revisiting on this momentous day. Well, it's probably worth revisiting every day.

Believe it or not, NASA's online presence maintains a pretty solid sense of humor — better than, for example, either of your parents on Facebook. (Let's face it, NASA on Facebook feels a bit like your dad on Facebook: down with the kids, knows what GSOH means, with you feeling a tiny bit uncomfortable with the whole thing.) NASA has played around with emojis, dropped references to "raucous star-making parties" into otherwise perfectly standard press releases, and has created one dramatic poster for each of its 45 missions.

The early posters looked a bit like what you made with Microsoft Paint in 2006 (no offense, NASA; this was, after all, around 2001-2005), but NASA has only grown more creative as our ability as a species to Photoshop has increased. For example, for Expedition 35, we had... this.

And then there's Expedition 42.

Even when they're not movie-themed, they're still dramatic. Take Expedition 40, for example.

These men are chill. They're down-to-earth (geddit??). This expedition is NBD!

Anyway, for the most recent poster — Expedition 45, which will see Scott Kelly jump from Expedition 44 to 45 as part of his year on the International Space Station, and then move onto Expedition 46 — someone at NASA was clearly aware that there's another Star Wars movie coming up. (OK, everyone at NASA probably knows that.) And so, we have... this.

As long as NASA doesn't channel 2017's 50 Shades Darker for its next poster, we'll be good.