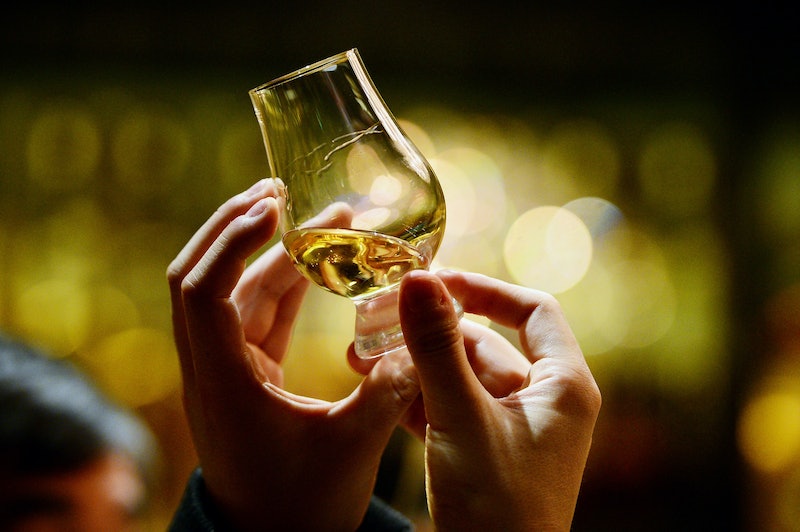 They say good things don't come cheap, and that phrase is especially true when it comes to alcohol — if you try to save money by getting the cheapest bottle you can find, you'll end up paying for it the next morning. Luckily for all you whiskey drinkers out there, there is now a way you can have your cake and eat it, too: a new product called Whiskey Elements accelerates whiskey's aging process, and can have your $10 bottle tasting more expensive in just 24 hours. I have no clue on whether or not it will make your hangover less painful (probably not), but at least nobody will know you’re shopping on the bottom shelf.

Whiskey Elements is basically a small stick of wood that you place in your Wild Turkey (or whatever your cheap whiskey of choice may be), and then you leave it in there for about a day or two. Creators David Jackson and the Time & Oak team came up with the idea after learning that the difference between cheap and expensive whiskey essentially boils down to how long it’s been aged in a barrel. So they decided to bring the barrel to you by creating Whiskey Elements.

You might be skeptical — after all, would putting a stick in your whiskey really do anything other than give you a tongue full of splinters? The process is actually pretty complex and scientific (take note so you can impress your friends with all your new whiskey-aging lingo). In both traditional aging and the Whiskey Elements kind, whiskey travels through wood (usually a barrel or cask), and the wood naturally filters out the toxins and chemicals that would make it taste gross. The longer a whiskey is aged, the more toxins are filtered out, and the better it tastes — hence why the whiskey that comes in a plastic bottle is pretty hard to swallow, and the expensive whiskey goes down a lot smoother.

So how does Whiskey Elements manage to cut the aging process down from years to just a few days? It’s not voodoo magic — it’s basically just surface area. When it’s aged the traditional way, in a barrel, the whiskey only gets about 1/6 of an inch through the wood. By putting Whiskey Elements in your drink, however, the liquor is able to make contact with more surface area (the sticks have a lot of ridges to increase surface area even more), which speeds up aging in a process known as “accelerated transpiration through capillary action.” I dare you to try out that phrase at your next cocktail party and see who isn’t impressed.

You can buy Whiskey Essentials at your local Time and Oak. They come in a two-pack for $14 or 6 for $38, which is still way less than a top-shelf bottle. Judging by the rave reviews, it seems to be well worth it. I just might give it a try.

Unfortunately for all of you out there who don't drink whiskey, you can't use Whiskey Elements in any other type of liquor (seems obvious, but I thought I should point it out anyway). So here are some life hacks to improve other types of crappy alcohol.

Put Your Cheap Vodka Through a Filter

You've heard the rumors, but were unsure, and I'm here to tell you that, yes, you can put vodka through a Brita filter to make it taste better — it won't taste like Goose, but it will be less bad. The only caveat is that no matter how much you clean the filter afterwards, there's a big chance your water will taste vodka-y, so it's best to wait until your filter is on its way out before filling it with Taaka.

Mix Your Boxed Wine With a Little Coca Cola

Sounds gross, but it's a real thing: red wine mixed with Coke is called a kalimotxo, and it's really popular in certain areas of Spain. Squeeze a little lime or lemon in there and you've basically got yourself a no-hassle sangria.

It's called a gin bucket, and basically what you do is put gin in a big container with lots of citrus fruits (lemon, lime, and oranges) and a little Sprite. Boom, done.

More like this
Are We Drinking Rosé All Wrong?
By Sheila Yasmin Marikar
Meet The Spice Company Founder Who Sees Chai As A Metaphor
By Madhuri Sathish-Van Atta
If Your Refrigerator Is A Mess, These 25 Organizing Products Can Help
By Courtney Young
Here’s What Sarah Jessica Parker’s Canned Cosmo *Actually* Tastes Like
By Emma Garza
Get Even More From Bustle — Sign Up For The Newsletter