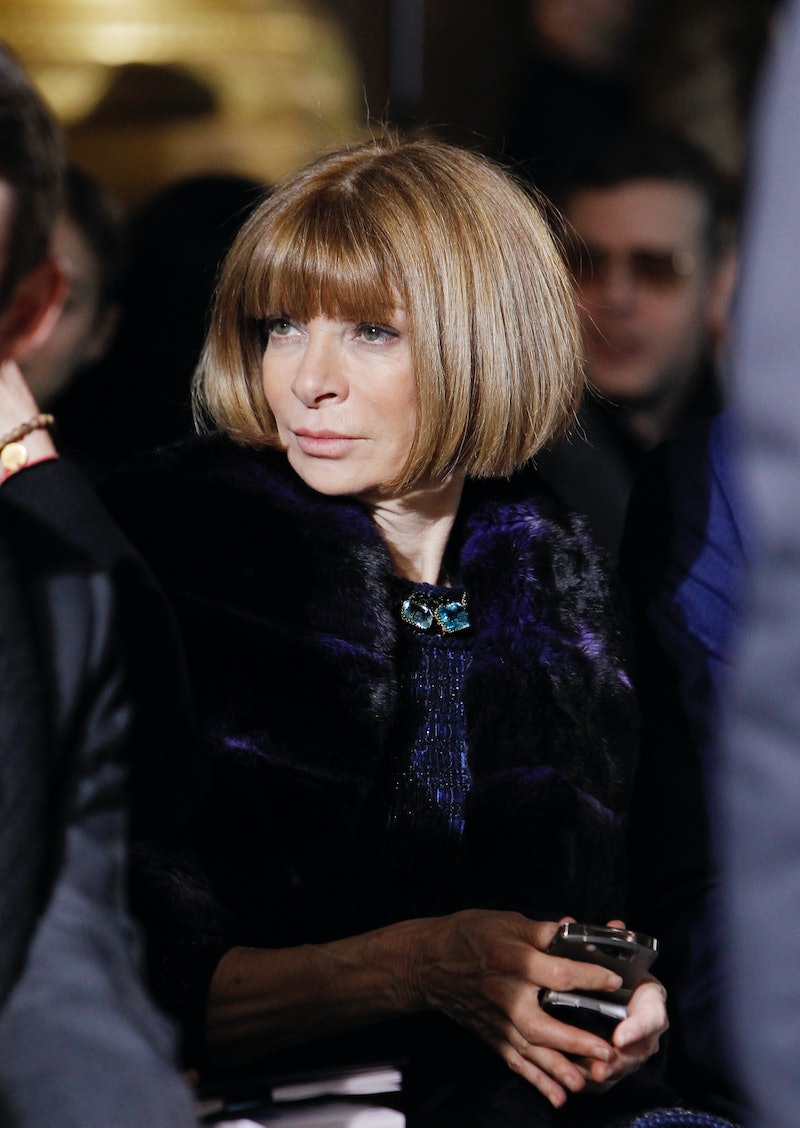 Anna Wintour is the definition the artistic prowess in the fashion industry. Recently, in an interview with New York Magazine's The Cut, Anna Wintour revealed that she is not the enigma that the public perceives her as. Simply put, she is just a very busy woman. From being the editor-in-chief of Vogue to becoming the artistic director of Conde Nast, Wintour has no choice but to be on the top of her game.

With the Met Gala happening Monday evening, it was of course a big topic of conversation in the interview, When discussing the Costume Center's newest exhibition, "China: Through the Looking Glass," Wintour is practically gushing about the pieces. When describing 19th century Chinese gowns, her details are like artwork. This interview alone shows why Wintour is the queen of the fashion industry.

However, the article isn't just about Wintour's style-related pursuits. Interviewer Amy Larocca digs deep into Wintour's personal life to try to shed some light on one of fashion's most mysterious personalities. Everything from family history to Wintour's lack of social media presence is discussed. The interview makes for a fascinating read, and gives real insight into the fashion icon. Here are a few things we discovered about Mrs. Wintour from the interview.

1. She comes from a news-worthy family.

Talk about having journalistic roots! Her father was a newspaper editor, her mother was a film critic, and her brother is the political editor for The Guardian.

2. She believes that luxury is the future for print publications.

When asked about the future of print, Wintour said she thinks "it's very important to make the print publications even more luxurious and even more special just to differentiate us from everything else that's out there." Continuing on why it'll last in the future (though maybe in a different format), she said, "You have to feel it coming off the page. You have to see photographs and pieces that you couldn’t possibly see anywhere else."

3. Taking too many risks is meaningless.

When discussing her relationship with Si Newhouse, former chairman of Conde Nast, Wintour stated that he always pushed her to take risks. However, she believes their is a time and a place for risks. "Obviously, you can’t do it all the time or it’s meaningless, but it’s important to be able to make that leap."

4. She doesn't remember the name of the model from her first Vogue cover.

Wintour has been in the fashion industry for decades. Remembering every model's name is not high on her to-do list.

As a connoisseur of all things culture, Wintour is known for finding the beauty in all sorts of art. It is no wonder then that she gives Lin-Manuel Miranda's Hamilton a glowing review.

6. You won't catch her watching House of Cards.

She isn't a big fan of shows where there isn't anyone to root for. Wintour mentions she won't be watching Mad Men either.

But I don’t watch Mad Men. I can see that it’s wonderful, but it’s so depressing. Or House of Cards. Everyone is so evil! There’s no one to root for, and you always want to root for somebody.

"I mean, get a grip! It’s a fast-food chain!" I couldn't have said it better myself.

8. She is an advocate for teen mental health.

Wintour goes into great detail in the interview discussing the immense pressure facing teens. Wintour believes that teen mental health is a topic that needs greater attention and understanding in a society that is quick to point fingers.

9. No one puts Anna Wintour in a corner.

Lean in? More like stand out. Wintour claims that during her time in the fashion industry she has never felt discriminated against for being a woman. Could you imagine the poor soul who would make that mistake?

10. She won't be posting to social media anytime soon.

Don't hold your breath for the @AnnaWintour account. The queen of the fashion industry is known for her keeping her private life top secret. However, that doesn't mean she isn't keeping up with others. In the interview, Wintour mentions following her daughter, Bee Shaffer, and Mario Testino's social media accounts.

11. Don't believe the rumors about her family.

Chilly Charlie? Not so much. In the interview, Wintour shuts down the impression that her father had a chilly disposition.

He adored the theater, he adored tennis, he was a wonderful dad, and I think, because he worked quickly and was decisive and he was sure about what he wanted, he got a nickname. Chilly Charlie. He was the least chilly person that I or that anyone at home knew, but it stuck.

I hope that I set as good an example as I can, but it’s not — I don’t wake up in the morning thinking, I’m going to set a really good example today!