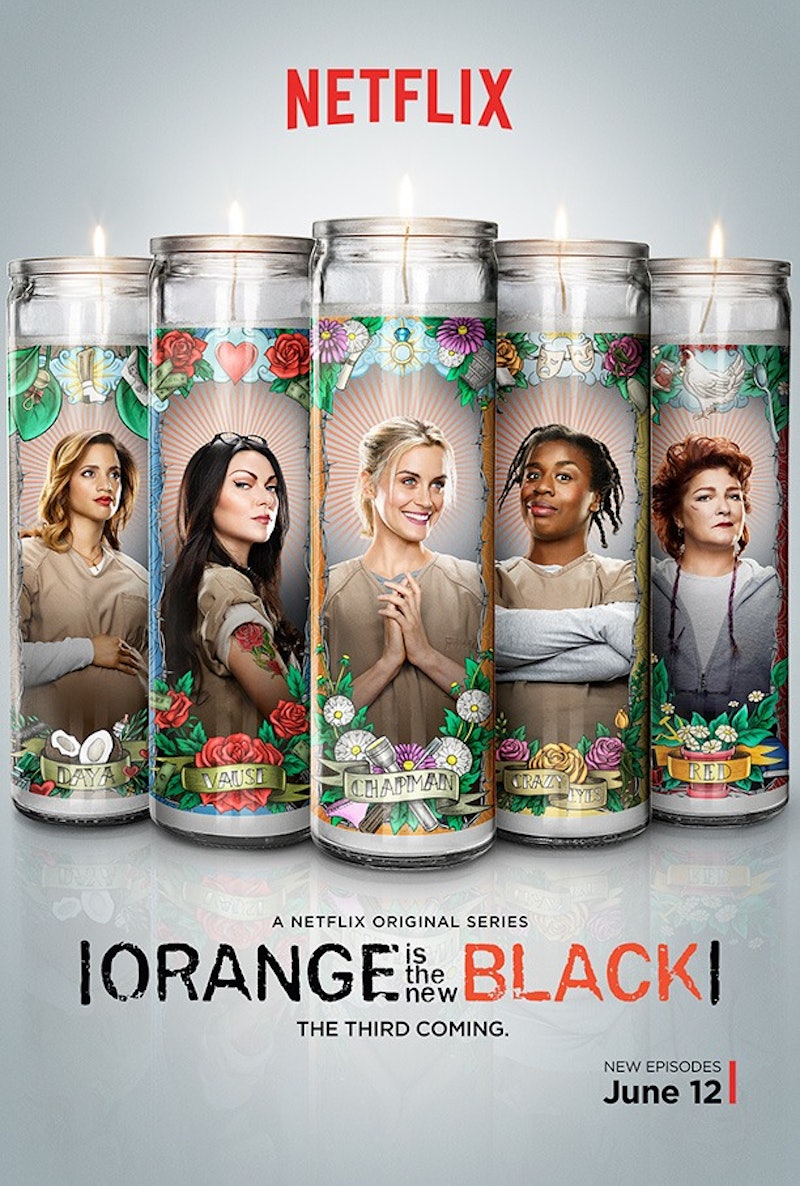 When it comes to divulging any specific details regarding Orange Is the New Black Season 3, creator Jenji Kohan likes to keep things pretty close to the vest. But that doesn't stop diehard fans, like myself, from digging up as many clues as humanly possible. So when Netflix released OITNB 's Season 3 poster — which found many of our favorite inmates' faces on the front of prayer candles — you can imagine the whirlwind of speculation it inspired. Will this season be about religion? Will Piper's journey take a spiritual turn? Well, thanks to a recent chat Bustle had with actress Laura Gómez, who plays Litchfield inmate Blanca Flores, we are now one step closer to understanding what the cryptic poster could signify.

You see, the way Gómez sees it, the poster is less literal and more of a figurative representation of what the show is all about. "I think it's women holding onto their beliefs or to faith," the actress explains, adding that it could also stand for how much the characters are trying with all their might to get "their spirits to not break." And really, that makes a lot of sense, considering the type of inner strength it takes to survive the trials of prison. "I feel like yeah maybe people are going to speculate: is this what Season 3 is about?," Gómez says in regards to fans' religious predictions. "But it's what the show is about… that type of spiritually and strength that you have to have to survive in prison."

With that in mind, it's slightly easier to connect what the symbols shown at the top of each individual prayer candle means to its corresponding inmate. These are the things each character will care about and hold out hope for in the coming season. For Daya, it will be all about Bennett and their child; for Alex, it will be all about money and love (perhaps rekindling that flame with Piper).

Speaking of Piper, given that we see an engagement ring is placed front and center on her candle design, it makes you wonder if maybe she'll have a harder time letting Larry go than we thought now that their relationship is dunzo. Or perhaps it merely represents the ties that once held her back. Now that he's out of the picture, their separation could be what inspires her to do even bigger and better things with her life — like writing for the Litchfield newspaper. (And if we were to ever come across Flores' candle, how much you want to bet there'd be a cell phone on it?)

Either way, it's safe to say that these wonderful women will continue to surprise us with whatever compelling storylines they have lined up. Is it June 12 yet?

More like this
Everything To Know About A Million Little Things' Reported Final Season
By Brad Witter
Penn Badgley & Leighton Meester Met On A Horror Movie Set Before 'Gossip Girl'
By Jake Viswanath
50 Years After Creating Her Alter Ego, Angelyne Is Still Driving That Pink Convertible
By Gretchen Smail
'Atlanta' Season 4 Could Be Here Sooner Than You Think
By Kadin Burnett
Get Even More From Bustle — Sign Up For The Newsletter