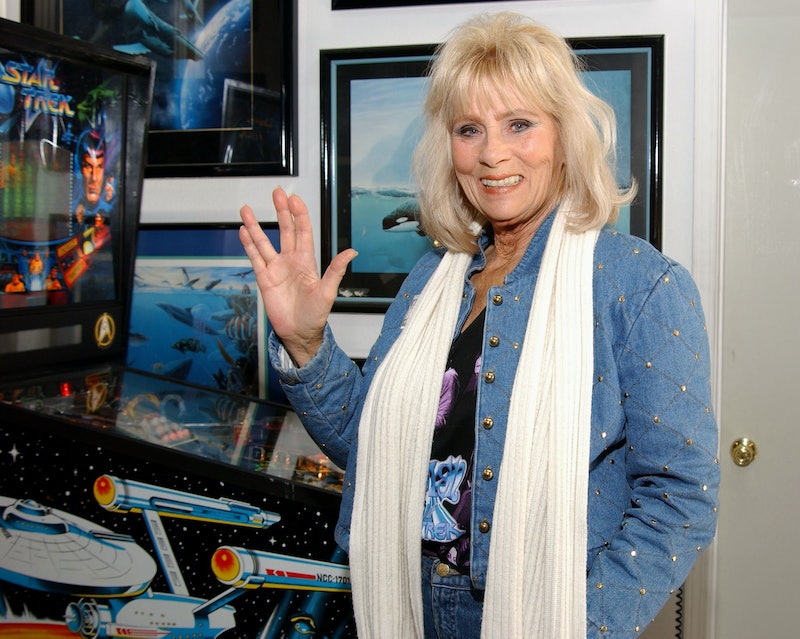 Trekkies just lost another great one. On Monday, May 1, Star Trek actress Grace Lee Whitney died at 85 at her home in Coarsegold, Calif. StarTrek.com confirmed her death on Sunday, May 3. Whitney was best known for portraying Yeoman Janice Rand in the original Star Trek TV series, in addition to Star Trek: Voyager and several of the franchise's movies. Despite only appearing in eight episodes of the beloved series starring William Shatner as Captain Kirk and Leonard Nimoy as Mr. Spock, who died in February at the age of 83, Whitney will always be remembered for her role.

Sadly, Whitney was cut from Star Trek after eight episodes and soon became addicted to pills and alcohol. As CNN reports, Whitney once told a British tabloid she became hooked on diet pills to stay thin and found herself craving alcohol. Whitney opened up to StarTrek.com in 2011 and said, "I just about killed myself over that reject. And when I would go on interviews, I would smell of alcohol. I was very Lindsay Lohan-ish, very Charlie Sheen. I was lost. I was lost and I began to bottom out. It took me about 10 years after getting written out to come to my senses when I bottomed out."

Not only did Whitney find help by living on Los Angeles' Skid Row, where she eventually entered a 12-step program, but Star Trek co-star Nimoy, a recovered alcoholic, gave her a helping hand. In addition to being known as Yeoman Janice Rand, Whitney made a name for herself by helping others with substance abuse problems.

Whitney's son, Jonathan Dweck, told The Fresno Bee, that his mother never stopped helping others with addiction through her words and even her 1998 memoir, The Longest Trek: My Tour of the Galaxy. Her son said, "She continued her fellowship work in Fresno and Madera County, completely dedicating her life to helping herself and others find daily sobriety and a higher power out of addiction."

In 2013 while chatting with the same publication, Whitney said, “When I told the fans I was an alcoholic, they all applauded. When I told them I had given myself to a higher power, they cheered again. I’m in a great place because I’ve gone full circle.”

Whitney will be greatly missed, but always remembered, which is proven through these tweets from fans who honored the actress for her greatness.

More like this
ITV’s 'Grace' Will Likely Return for A Third Season — & Many More After That
By El Hunt
You Can Thank Spider-Man For The Meme-ification Of Movies
By Dana Schwartz
Is Megan Fox Pregnant? MGK Gave A Shout-Out To Their “Unborn Child” Onstage
By Hugh McIntyre
Twitter Is Upset About The 'American Idol' Top 3 Results: "Who TF Is Voting?"
By Jake Viswanath
Get Even More From Bustle — Sign Up For The Newsletter