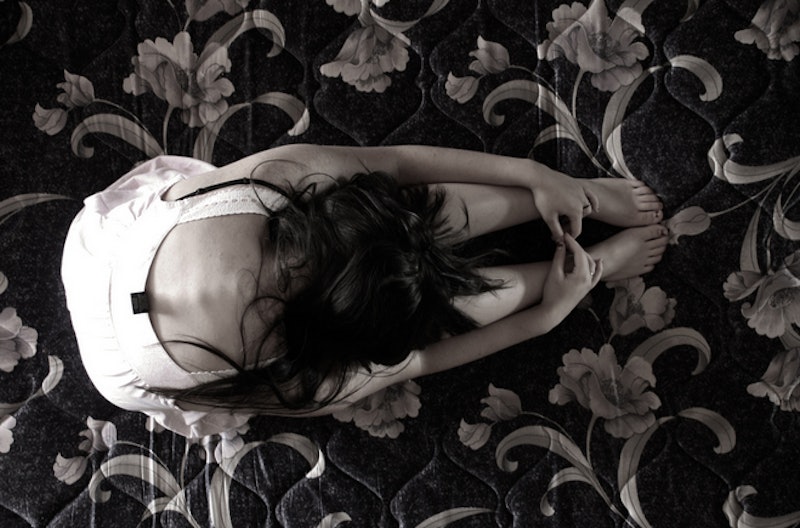 Like many people, my biggest mental health challenge is depression. I have been depressed the majority of my life, but it wasn’t until after a suicide attempt in 2005 that I was finally diagnosed as having Major Depressive Disorder. Up until then, at least according to my friends and family, I was just sad, sensitive, and had rough days. The word “depression” was rarely used.

But that's what I have — and I'm not alone. Approximately 19 million Americans and worldwide 350 million people suffer from depression. According to the World Health Organization, depression is the leading cause of disability, and more women than men are affected by it. Here in the United States alone, 10 to 25 percent of women, and 5 to 12 percent of men, will become clinically depressed at some point in their lives.

In recognition of Mental Health Awareness Month, Bustle spoke to some of our readers to see what their biggest mental health challenge is. Here’s what 12 people had to tell us.

"I've struggled with depression and anxiety since my teenage years. It's especially scary to me because I have a family history of mental health issues, but I try not to dwell on what the future could hold — and to remain hyperaware of my feelings and moods. By now, I think I've learned how to handle myself. But I do have to keep an eye out for things that could affect me negatively in order to prevent myself from downward-spiraling. It sucks, but I think dealing with these issues has made me stronger and more self-aware. Silver lining?"

"I'm a mixed bag of issues, some formally diagnosed and some not. I've been dealing with depression and disordered eating most of my adult life. I'm on medication for anxiety/panic attacks, but I get them rarely enough that I don't have to take the meds very often. My biggest struggle, though, is with self-esteem and body image."

"[My challenges are] eating stuff and anxiety, with perfectionist tendencies. All of it has gotten a lot better with age and therapy, though. And luckily, I live in California ... so I can smoke weed everyday!"

"Depression. I also get panic and anxiety attacks, and hormonal shifts as I get older seem to make my high and low swings more extreme. It runs in my family, so I'm guessing it's partly nature and partly nurture. I would like to say I'm more prepared to handle things these days, but that would be a lie. When I get overwhelmed ... all bets are off."

"Depression is my big demon. It contributes to all the other little issues that I deal with. When it's under control, everything else in life seems easier. And mostly, I'm doing pretty well with it and have been taking better care of myself. I just take 5-HTP and haven't been on antidepressants for nine years, so occasionally, it will pop up full force, seemingly out of nowhere.

The worst was when I was a teenager and had no idea how my brain was sabotaging me. I just assumed I was an awful, weak person for not being able to handle life. I now know better, and just that knowledge is super helpful and gets me through the rough patches."

"SOCIAL ANXIETY. Also, as a result, I tend to turn inward and build my own little world that allows me to be happy and enjoy myself ... without having to interact with people. This exercise itself is not without its drawbacks/challenges that aggravate mental health issues."

"Obsessive behavior. I will fixate on a particular food suddenly and then not be able to relax until I eat it, and it's really bad if it's a kind of food you slice some off of like a block of cheese. I will picture the shape of the block of cheese and imagine how much I am going to cut off of it and then if the reality doesn't conform to what happened in my head, I will obsess about it for HOURS and potentially (this has actually happened) eat the entire block of cheese just to turn off the obsessive thinking."

"My biggest challenge is postpartum depression. It hit me really hard after my first child was born, and it made it so I actually feared having my second child. I had him — and it hit me again even harder, and for longer. It made me realize that as much as I want a big family, I just can't handle the mental end of it."

"My challenges are depression and Borderline Personality Disorder. I've had the BPD since I was little; doctors initially thought it was possibly Asperger's, because socially, I was pretty much a loner. I was finally officially diagnosed with depression in 2010 and BPD in 2013.

What makes it even harder is my dad and my paternal grandparents don't believe in depression, maybe not even mental illness, period. They just think I'm 'severely disappointed' with my life and that I just need to not be so hard on myself and cheer up. Fortunately, my mom and my stepdad have been hugely supportive and have helped me enormously over the past several years, in more ways than I can even think of, even if it's just with a hug or the right words."

"I'm a 28-year-old gay male whose mental health was most out of control in my early 20's (whose wasn't?). Compared to that time, I've evened out considerably, thanks in large part to a fantastic therapist and antidepressants. While the therapy has definitely been the most influential, the meds have been an important part of maintaining my daily mental well-being.

My biggest hurdle at the moment? Not having insurance, and not being able to afford any of the Affordable Healthcare Act plans. I'm very lucky to have found a therapist who cuts me a considerable deal because I've been with him for long enough, but refilling my prescriptions can be a logistical nightmare. The free clinics take forever and I work a hell of a lot, so every few of months the timing is off and I go three to five days without the meds.

My brain is on fire by day three, and once I get back on [meds], it takes a couple days to even out. During those days, I'm irritable, moody, and very, very sensitive. One day, I hope to ween myself off of meds entirely, but even that is difficult to do without a regular psychiatrist, which is way harder to find without insurance than an LCSW."

"Depression. It comes in bouts but when it strikes, it strikes hard ... My depression has no particular reason. It comes and goes when it chooses, like an uninvited guest. Though I have thoughts of hurting myself, I am thankful that I haven't ... But I can cry for hours until all the tears dry up.

My friends or colleagues don't understand it. When I go into total silence, they assume that I am either mad at them or showing an attitude. I don't blame them, because mental health is still a taboo in most parts of India. For some, that includes my friends and relatives, depression is [still viewed as] non-existent."

More like this
The Beauty Device Kristen Bell Uses Every Single Morning
By Carolyn Steber
These Artists Are Reimagining Black History Month To Create A Better Future
By Katie Mitchell
25 Inspiring Quotes From Black Women To Celebrate Black History Month
By Kyli Rodriguez-Cayro and JR Thorpe
19 Instagram Captions For Celebrating Black History Month
By Ayana Lage
Get Even More From Bustle — Sign Up For The Newsletter
From hair trends to relationship advice, our daily newsletter has everything you need to sound like a person who’s on TikTok, even if you aren’t.