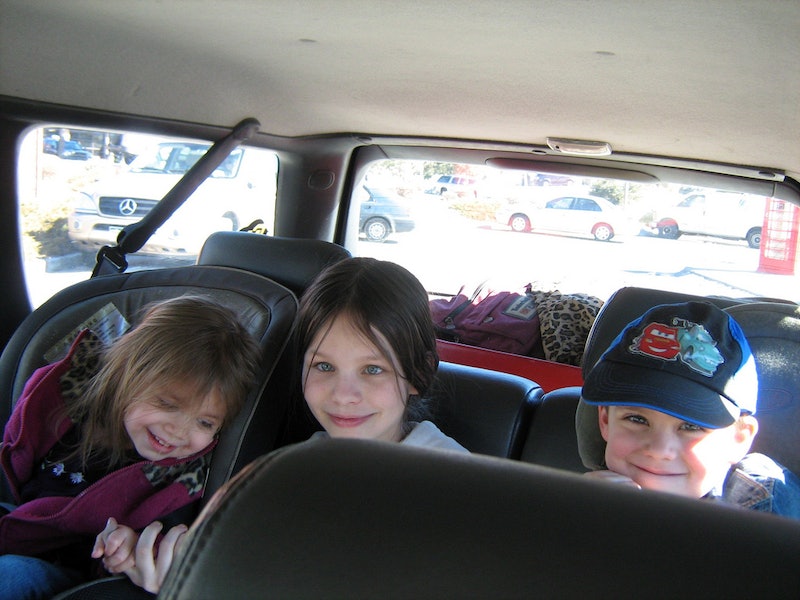 Did you have a designated seat of your own in the family car when you were a kid? If yes, I've got good news for those of you who always drew the shortest straw: According to a somewhat hilarious new study, kids who sit in the middle seat grow up to be more successful than their window-seated siblings. If you've ever wondered what your childhood car seat position says about you… well, now we know. Or something.

The study was conducted by car company SKODA, and included responses from 1,000 people in Britain who grew up in a family with at least three kids. Here's the short version of what they found:

SKODA speculates that these correlations may be the result of “personality traits that middle seat kids develop”: According to their data, 44 percent of former middle seat kids are described as “easy going” adults, with “reasonable,” “patient,” “level-headed,” and “adaptable” close behind. A full 80 percent of respondents attributed their work-life success to their days as middle seat kids — and, indeed, 66 percent actually said they enjoyed sitting in the middle. I was not aware these mythical sorts of people existed...

...But I stand corrected.

Child psychologist Laverne Antrobus — who, incidentally, has three children of her own and therefore is in the process of raising a middle seat kid — spoke to SKODA about their findings, commenting, “The research by SKODA into family car journeys is really interesting; cars are a unique environment and a lot can be revealed when everyone is sitting together in a confined space.” She added, “It's fascinating to see how a seating position in the back of the car, often over many years, can directly reflect or influence our personalities.”

Of course, there are perhaps a few grains of salt with which we need to take this study. First off, it's not clear exactly how SKODA gathered their data, or from whom they gathered it. Furthermore, SKODA is a car company; the survey was actually done as part of promotion for the company's new Octavia model, a hatchback described on the SKODA website as “more luxurious than its predecessors” (its ample “headroom, legroom, and luggage-room” are said to make it “more comfortable and spacious on the inside”). So, y'know… do with that what you will.

In any event, since we now know what being the middle seat kid says about you, let's take a look at what a few other childhood car seat positions might betray about our personalities, shall we? I have a few incredibly not scientific ideas. Where did you park your butt during long car rides when you were young?

You're incredibly competitive and will always fight for the best seat in the house — literally or metaphorically. You'd rather not be in charge of any scary management situations yourself, but you're A-OK being second in command. You're also really particular about your music selections.

2. Left Hand Side in the Back

If you couldn't be driving yourself, at least you could pretend to have the illusion of control by sitting behind the driver (if you grew up in a country where the wheel is on the left hand side, that is). You're still kind of a control freak, and a little bit of a backseat driver. You are also possibly left-handed... but maybe not.

3. Right Hand Side in the Back

You're a daydreamer, aren't you? There's nothing quite like just staring out the window and letting your mind wander as the world goes by. You have a lot of big picture ideas, but sometimes have difficulty following through on them.

4. One of the “Captain's Seats” in a Minivan

You grew up watching a lot of Star Trek and always wanted to be Captain Picard when you grew up. These days, you're comfortable in positions of command — but secretly, you know you just did it for the comfy chair that comes along with all that power. That thing is awesome.

5. The Far Back Seat in the Minivan

Sure, your siblings may have always considered the “Captain's Seats” in which they usually sat to be the best seats in the car — but you knew better. Having the entire back seat to yourself meant you had all the space you could ever want. Heck, you could even spread out and take a nap back there if you wanted. You're what they call “a diamond in the rough”: You may not look like much, but like your choice in car seat, you have hidden depths that only those who look beyond the obvious will find.

What on earth were you doing in the driver's seat as a child?! Let's just take a second to remind ourselves that putting children in the driver's seat is extremely unsafe. Unless your kids are old enough to be learning how to drive, or are already fully grown and have an operational driver's license, they shouldn't be anywhere near the wheel. If this was you, though, odds are you're a risk-taker. You make other people nervous, but you're excellent at rolling with the punches.