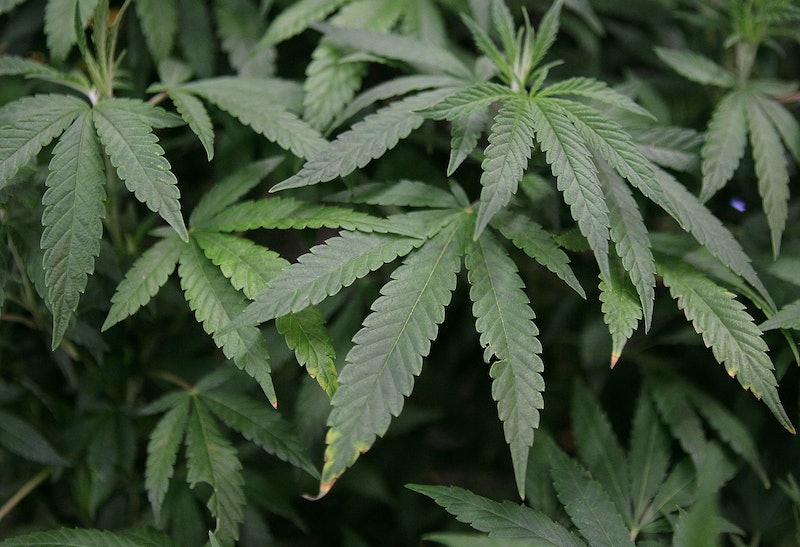 It's Monday, aka, time to break out the notepad, write down every work project you abandoned on Friday, your grocery list, and all the people you put off calling this weekend to make one giant, terrifying to-do list. It's a simple way to make yourself more organized and less frazzled. You'll take a few organizational steps, have some coffee and start crossing things off. You got this. And even if you don't, here's something that will probably make you feel better about yourself: This lovely Australian stoner's to-do list that got posted on Twitter by police is basically all the life guidance you need. Some people's days are just slightly more chill than yours, and maybe it's time to take a page out of their book.

Here's what happened: Australian police entered a ~marijuana user's~ house with a search warrant and found his very important to-do list. Then they did what any extremely mature and professional Police Department would do: posted the list on Twitter. Nothing says service to your country quite like a viral tweet, am I right?

Anyway, the list is phenomenal in every possible way. First, in this beloved stoner's defense, it's a to-do list for Saturday. So, don't judge too harshly, guys. Maybe, come Monday, he was going to take a crack at solving world hunger, or help the homeless. For all we know, he was flying to California to meet with government officials about the drought. We honestly don't know his life. Let's not judge anyone by their Saturday to-do list.

But on Saturday, he was pretty busying taking the bus. Probably to buy more weed. He's definitely a forward thinker. A bus fare reminder is always necessary. Sick move, bro. And deciding what you're going to eat ahead of time is crucial, if you're worried about impending munchies.

So, there you have it folks. The to-do list is one hundred percent real, as are the dreams of stoners everywhere.

My favorite part is that once he's gotten up, gotten ready and eaten his chips and gravy (which I'm like 90% sure is gravy fries, but I don't speak Aussie), he still needs a reminder to get stoned. No judgement here. But I do think he needs to expand his stoner food repertoire. Here are a few foods he needs to add to his list:

It's like gravy fries (chips and gravy, whatever) except with CHEESE. C'mon, man. You call yourself a stoner and yet you don't have the good sense to put melted cheese on your smothered fries? W e a k.

A very similar concept. There's a truck in LA called The Lobos Truck and it specializes in stoner foods. The word "wachos" is a fusion of "waffle fries" and "nachos." I know, it's clever as hell. They make nachos, except using waffle fries as a base instead of tortilla chips. It's everything you've ever dreamt of.

Okay, here's what you do: Make bacon. Assemble the bacon and cheese on bread and bake it in the oven at 200 degrees in a greased pan. Smoke. Eat the grilled cheese 10 minutes later. Cry with happiness and watch 3 movies in a row.

More like this
8 TikTok Pasta Recipes To Try Out At Home
By Emma Garza
How To Make The Grinder Sandwich TikTok Is Obsessed With
By Emma Garza
What Is “Night Luxe?” Breaking Down TikTok’s New Aesthetic
By Courtney Young
TikTok Is Using A ‘Love Island’ Sound To Expose Their Weird Crushes
By Courtney Young
Get Even More From Bustle — Sign Up For The Newsletter