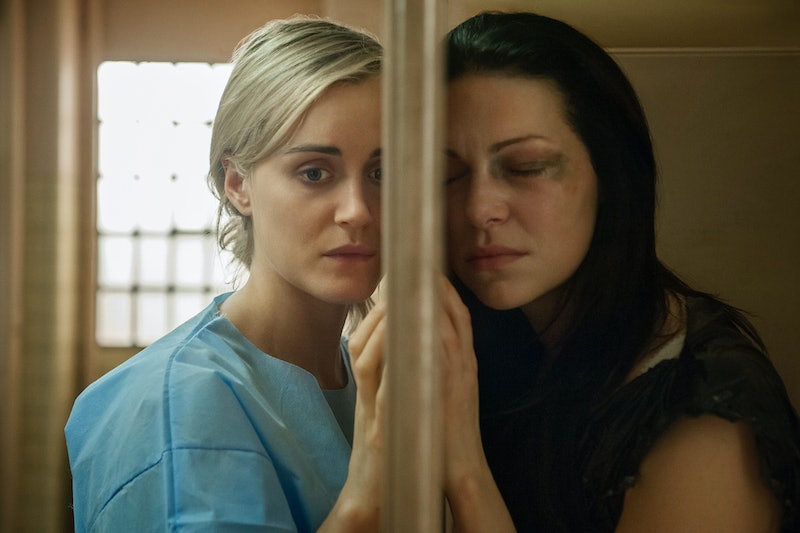 When it comes to something as precious as Orange Is the New Black Season 3 spoilers, I tend to think of them as rather priceless jewels in that they are very rare and extremely hard to come by. Sure, a religious-themed poster and acton-packed trailer have given us a few juicy teasers to chew on until June 12, but on the whole we have no idea what kind of craziness to expect from these lovable Litchfield ladies in the next chapter of their Netflix installment. Thankfully, one of the show's stars Laura Gómez, who plays the cell-phone-hiding inmate Blanca Flores, took mercy on our desire for a few details by dishing out a few cryptic hints about her character this season.

Though she couldn't give away any specific details about Blanca's fate or even whether or not she'll finally get a proper backstory (which would undoubtedly include a Diablo sighting!), the actress did reveal that she will share scenes with some very unexpected characters you wouldn't predict Blanca to align with. "I have scenes with unexpected people, how about that? Unexpected characters that you would not necessarily connect Blanca with." Color me intrigued! Blanca's had a tendency to generally keep to herself these past two seasons (unless you mess with her cell phone, that is), so it'll be interesting to see how her story arc fits in with everything else as the plot progresses.

And while her character's own relationship status is being kept under wraps, Gómez assures fans that they'll be in store for a ton of new and highly intriguing Litchfield relations. "I will say there are new dynamics, that's for sure. So there are new people bringing new dynamics to this season." We know that a couple of new characters have been sentenced to Season 3, so does this mean they could shake things up for some of our core couples? Right now it's anybody's guess, but I sure can't wait to see how it all plays out.

But those weren't the only teasers Gómez brought to the table. As a parting gift, she was kind enough to also describe a few OITNB spoilers using only emojis. And here's what she came up with…

So let's try to interpret these as best we can, shall we?

Going from a literal stand point, the praise hands could further indicate the whole religious aspect that seems to be surrounding Season 3 or perhaps hint that someone at Litchfield will be going on a spiritual journey to find their true self.

A grinning devil can only mean one thing: someone (or multiple someones) will be up to know good in the coming season and provide us with even more conniving and evil antics. But is it all in good fun or will it lead someone to a hellish kind of fate?

A Death Or Haunting Could Be In Store

The ghost icon is very interesting to me. On the one hand, it could mean another Litchfield death is on the way. But on the other hand, perhaps it represents the idea that someone will start feeling haunted by their past. Which, knowing these ladies, they more than likely have a ton of skeletons (or ghosts in this case) in their closets.

As for the tongue face, well, it just goes to show that silliness will be in as rare form as ever this season. But really, would we have it any other way?