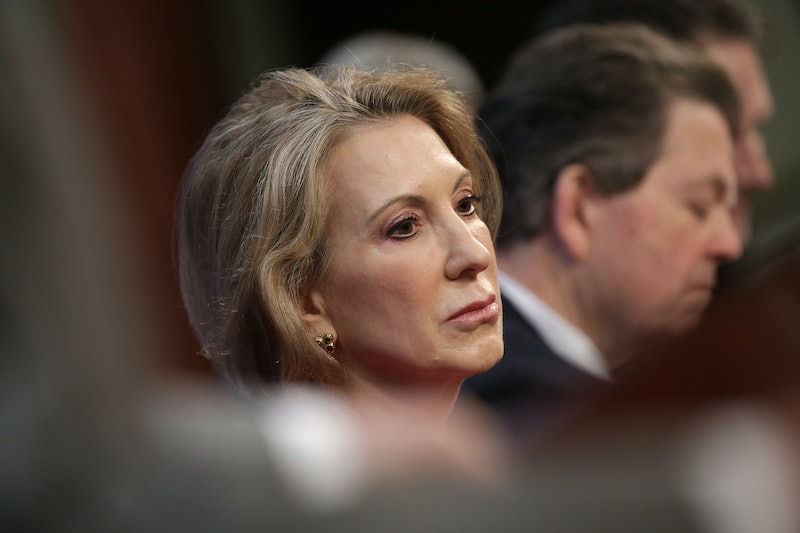 On the surface, Carly Fiorina seems like your typical fresh-from-the-mold Republican. Her passion for bringing the country back from what conservatives see as the brink of disaster and her stance on same-sex marriage are, of course, relatively textbook. But while Fiorina espouses a strong belief in cutting taxes (ideally for the wealthy, although she doesn't see it that way), it's Fiorina's record on jobs and views on minimum wage that might get her in trouble (especially with her fellow women) in 2016.

"The sad truth is that raising the minimum wage will hurt those who are looking for entry-level jobs," announced Fiorina to a befuddled audience in a 2014 panel hosted by none other than the Clinton Foundation. She attempted to soften the blow by adding, "I think there’s no question that if you’re making minimum wage you think you want to make more."

If Fiorina were to take the presidency in 2016, as Newsweek pointed out on Monday, she would be the only White House tenant without previous political experience, along with such figures as Dwight D. Eisenhower and Ulysses S. Grant (both of whom, to their credit, were key military strategists in their own time, unlike Fiorina). And while Fiorina touts her inexperience as a plus, many have questioned whether the business background of which she so often boasts is really worth the ticket price.

She was first known as a rising star. She took risks, overcame obstacles, kept communication between employees and administration open, and even saw decent financial quarters during her tenure. But Fiorina has a troubled history with the business sector. In August 2011, CNET called the former CEO's departure from computer giant Hewlett Packard "a mess." "[The] Carly Fiorina HP era is finally over...good riddance," wrote the site. After being brought on as the head decision maker in 1999 (in Fiorina's defense, it was a massive feat: With her hiring, she became the first woman ever to lead a Fortune 20 company), Fiorina allegedly spent the next 12 years attempting to turn HP into a tech behemoth too large for its own good.

In 2002, despite both internal and external concerns, Fiorina pushed through a highly criticized merger with Compaq Computer Corporation. That same year, HP announced that it had cut nearly 30,000 jobs due to workforce redundancies caused by the merger, leaving thousands of families and individuals in the dust and arguably tarnishing the CEO's gleaming record.

On Monday, a website registered under the domain "CarlyFiorina.org" used its timely reservation to highlight the massive cuts and throw off the beleaguered former CEO.

"Carly Fiorina failed to register this domain [...] so I'm using it to tell you how many people she laid off at Hewlett-Packard," the site explained, following its statement with 30,000 frowny-faced emoticons.

Fiorina's tenure as HP CEO isn't the only issue plaguing her new campaign. The businesswoman's statements on minimum wage at the Clinton Foundation panel, coupled with her insistence against the wage hike at this year's CPAC have also put a dent in her credibility.

"The real war on women is being waged by liberal policies in communities across America," Fiorina told reporters, adding that some 62 percent of minimum wage workers were actually high school students who didn't need the raise — a massively incorrect statement, as ThinkProgress pointed out on Monday. According to a report by the National Women's Law Center in March last year, nearly three-quarters of minimum wage workers were actually adult women.

Fiorina's views on income equality for women at least are more hopeful-sounding. In an interview following her speech at Trident Technical College in North Charleston, South Carolina last fall, Fiorina declared that the problem with equal pay lay in the fact that many women simply weren't allowed to reach the upper echelons of the corporate and government world:

It's not a question of lacking qualifying women. ... And [since many women are forced to take time off with their families], they never get back on top with a seniority system.