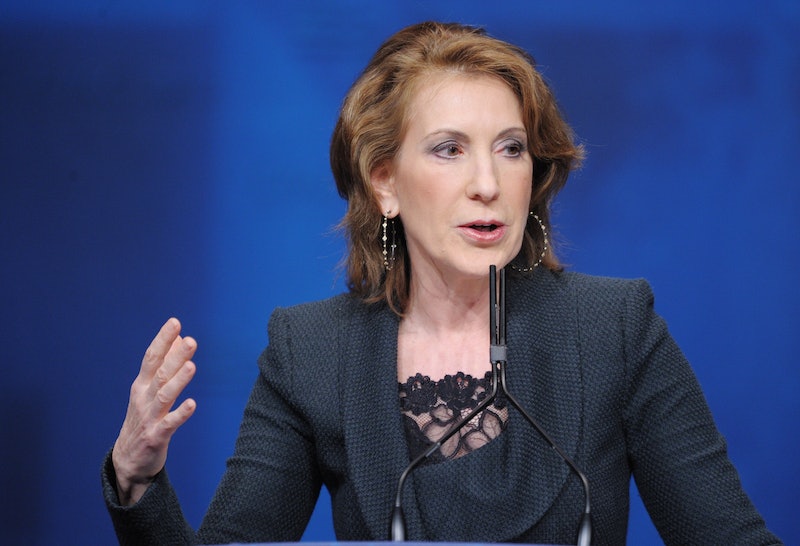 Carly Fiorina, known as a successful Republican businesswoman, announced her candidacy for president Monday. She is recognized for the six years she led a Fortune 20 company, but what did Fiorina do before she was CEO of Hewlett-Packard? Fiorina started out as a secretary at a real estate firm and joined AT&T as a trainee, working her way up to running a top technology company.

Fiorina was born in Austin, Texas, to an artist and a federal judge as Cara Carleton Sneed, and later went to Stanford for philosophy and medieval history. She jumped around a bit after college, going to law school at the University of California, Los Angeles, dropping out after one semester, and then working as a secretary at the real estate firm Marcus & Millichap. She was promoted to a broker position, but left to teach in Italy. When she returned to America, she went back to school at the University of Maryland, College Park for a masters of business administration in marketing, and later also received a masters of science in management from MIT Sloan School of Management.

Fiorina started her career in the tech industry at AT&T in 1980 at an entry-level position and was offered promotion after promotion, eventually becoming president for the global service provider business at Lucent in 1998, putting her in charge of sales for the telecommunications company. Fortune Magazine named Fiorina "the most powerful woman in business" in 1998, followed by Oprah Winfrey in second place. Fortune wrote about Fiorina: "A super saleswoman whose star turn was selling Lucent to investors: She led the biggest IPO in U.S. history."

The next year, Hewlett-Packard asked her to be CEO, making her the first woman to lead a Fortune 20 company. While running HP, she reorganized the company and planned a merger between HP and Compaq Computer Corporation. The merger, however, didn't lead to enough profits, and Fiorina was asked to resign in 2005. Before her resignation though, Forbes listed her as the 10th most powerful woman in the world (Hillary Clinton was fifth).

Fiorina's done quite a bit since leaving HP. She initially joined the boards of directors of various companies, including Revolution Health Group, Cybertrust, and Taiwan Semiconductor Manufacturing Company. She also experimented in politics, unsuccessfully running for Senate in California in 2010 (she was beat by the incumbent Barbara Boxer). As she was running for office, she was battling breast cancer and had a double mastectomy and underwent chemotherapy.

Fiorina now chairs two nonprofits — Good 360, aimed at helping companies donate to charities, and Opportunity International, a microfinance nonprofit (from which she resigned Monday after announcing her bid for president) — and is chairwoman of the American Conservative Union Foundation and the Unlocking Potential Project, a Super PAC she started.