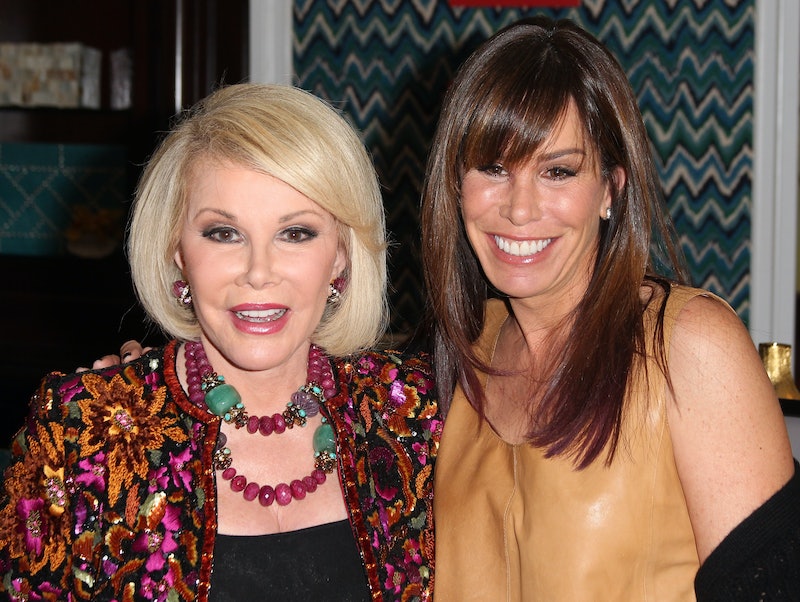 It's been eight months since comedy, fashion, and talk show icon Joan Rivers died from throat surgery complications, but on Monday, Melissa Rivers talked about her mother Joan Rivers with Today's Matt Lauer. Melissa offered details about the day of her mother's death, in addition to opening up about why she wholeheartedly believes Joan's death could have been prevented by the doctors she saw for her minor surgery — something that's been discussed time and time again. As Lauer mentions during the interview, the clinic and Joan's doctors have denied "any wrongdoing."

While chatting with Lauer, Melissa said she had a "very normal conversation" with Joan the night before her minor throat surgery at New York City's Yorkville Endoscopy, which was needed to treat acid reflux. Melissa revealed that Joan said, "Ugh, I hate having to do this. Getting old sucks." But Melissa was not nervous whatsoever and had no worries about Joan's surgery, until she got a call from her mother's assistant, who was crying and told Melissa that Joan had stopped breathing.

As Melissa flew from Los Angeles to New York City, based on emails, she knew things were "bad," but she became even more aware of the tragic situation once she walked into her mother's hospital room, which was filled with machines. "I just couldn't believe what I was seeing," Melissa told Lauer. "It becomes very surreal."

Melissa filed a malpractice lawsuit against the clinic and doctors, because she believes Joan's death could have been prevented. She said, "In my opinion, it was 100 percent preventable." What could have been done differently? Melissa said, "How about paying attention to the vital signs? How about having a properly equipped crash cart?"