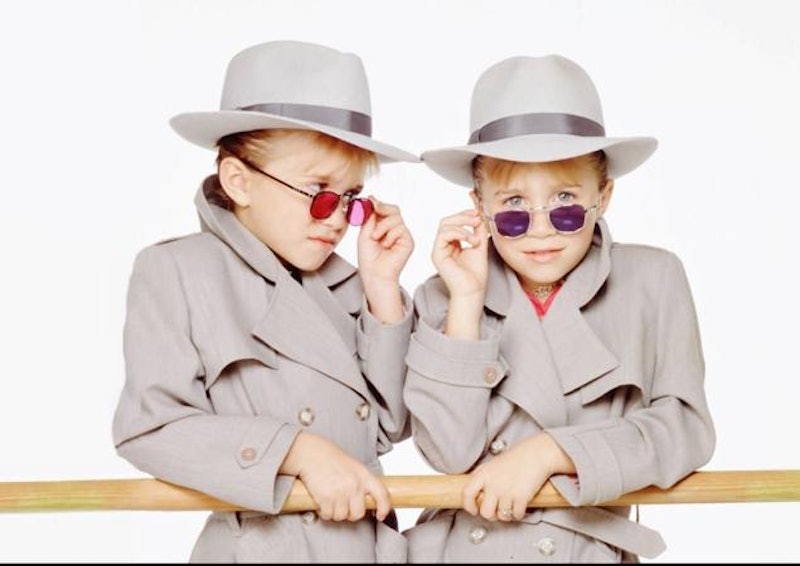 If you grew up in the '90s, odds are, there's a special place in your heart for Mary-Kate & Ashley movies. Whether you preferred to see the Olsen twins starring in standalone features, throwing elaborate theme parties, or solving crime, there was a whole collection of movies to choose from. When watching them as a kid, it may have seemed like all of those movies were equally awesome, but looking back as adults, I think we can all agree that there was a clear hierarchy — especially when it comes to The Adventures of Mary-Kate & Ashley, their mystery series.

Every mystery video contained certain elements: the matching trenchcoats, a call for help answered on those pastel phones, the twins' sorting out the logistics (like whether or not the crime could indeed be solved by dinnertime), their canine sidekick Clue, a few full-fledged music videos, analysis of clues, and of course, a big reveal. It's clear now just how much The Adventures of Mary-Kate & Ashley primed us for the many twists and that we would face in the future as we graduated to more complex, cliffhanger-laden mysteries like Pretty Little Liars.

I'm completely serious — with every case, the Olsens would lead us down one path only to change directions at the last minute. So to properly honor the crash-course in mysteries that the twins gave us, here are the best Adventures of Mary-Kate & Ashley ranked from least to most shocking reveal. But first, here's the opening theme to every video to get you in the proper mindset.

The Case Of The United States Navy Adventure

Sure, this mystery might've taught kids about the U.S. Military, but ugh, science? We didn't watch Mary-Kate and Ashley videos to supplement elementary school earth science. Anyway, the reveal was that what people thought was a UFO was actually a satellite that fell out of orbit. Yawn.

The Case Of The Volcano Mystery

Reveal: Volcanoes are dangerous, so scientists need to look out for you.

When the girls are called in to figure out who's been attacking miners near a volcano, they think they're hunting a full-fledged monster. Turns out, the monster was just a nice scientist trying to teach the miners an important lesson about safety, because, you know, volcanoes aren't the best place to hang out. I'm sure this was a very valuable lesson for all of the Mary-Kate and Ashley fans who live near active volcanoes.

The Case Of The Fun House Mystery

Thank goodness for this reveal, because fun houses are scary enough without the threat of actual monsters hiding within them. The Olsen twins could have basically put carnivals out of business if they'd had anything but a friendly primate as the villain of The Case Of The Fun House Mystery.

The Case Of Thorn Mansion

Reveal: The ghost haunting Thorn Mansion is just a nice man who's super into beekeeping.

This twist came as a relief, considering how creepy the mystery's setup was (something the above video doesn't quite get across). Set in Transylvania, which all kids know is the home of nothing but terrifying monsters, the twins become paranormal investigators as they try to figure out why Thorn Mansion is haunted and come across a scary white figure. Thankfully, it was just someone indulging in a beekeeping hobby — though that might've been even more horrifying for anyone with a fear of bees.

The Case Of The Mystery Cruise

Reveal: The original thief was simply pretending to keep the girls occupied — but TWIST! one of the cruise's mimes tried to pull over one on them.

Pssh. You think you can trick the Olsen twins just because you once helped them out at a performance? They're onto you, mime, and while the first reveal of the thief just playing along was pretty boring, the second (which lead to what must've been the first chase scene I'd ever witnessed) moves it up the list, though not as high as its predecessor, The SeaWorld Adventure.

The Case Of The Logical i Ranch

Reveal: The monster terrorizing the ranch is actually oil.

If you loved How The West Was Fun, this was probably your favorite installment of The Adventures of Mary-Kate & Ashley. It brought the girls to the titular ranch, where weird noises, smells, and findings made the ranchers believe they were being plagued by a dragon. As great of a reveal as that would have been, the discovery of oil shooting out of the grand and presumably making everyone super rich was pretty awesome.

The Case Of The Hotel Who-Done-It

Reveal: THE PARROT DID IT.

When Mary-Kate and Ashley were called to a Hawaiian hotel to figure out who was stealing the guests' various possessions, we were all expecting it to be a greedy guest or suspicious employee, but as usual, the twins proved us wrong. The thief was a parrot who was simply attracted to shiny objects and had been hoarding them in his cage. A definite jaw-dropper, and one that may very well have changed the life of any child with a pet bird.

The Case Of The SeaWorld Adventure

Reveal: Mary-Kate and Ashley have the best life ever.

This video shows the twins living the dream of every 9-year-old girl: living at SeaWorld with their dolphin trainer parents, just chillin' with marine animals on a daily basis. If that wasn't enough to make you jealous of their (fictionalized) lives, this creepy murder mystery — yes, MURDER — was revealed to have no true culprit. The entire thing was setup by their parents' boss as a way to get the whole family on a surprise cruise. And you thought it was cool when you visited your parents' work and someone got you soda from the vending machine.

Who am I kidding? Every single installment of The Adventures of Mary-Kate & Ashley proved that the twins had the best life ever. Who wouldn't want to ride their bike to a new crime scene, solve mysteries with their best friend/twin, be endlessly thanked, and make it home in time for dinner? The most shocking reveal may just be how jealous we all still are of the made-up lives of two 9-year-olds.