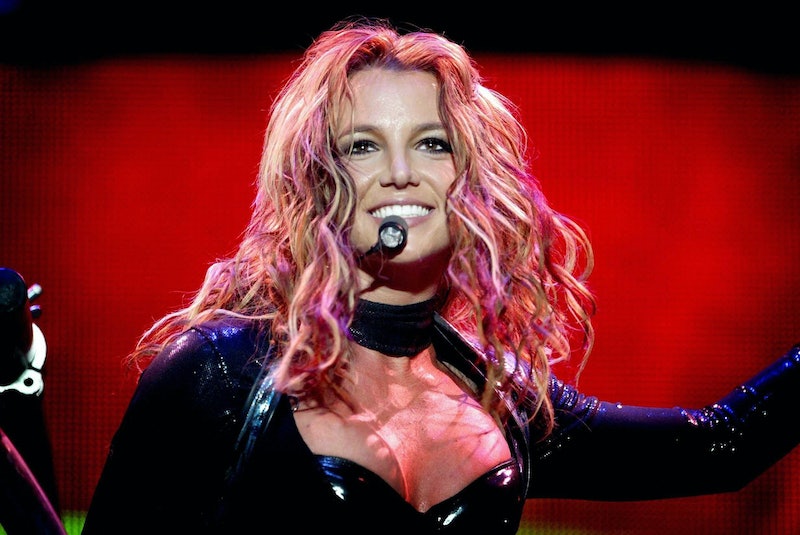 Britney Spears is back, you guys, and in rare form as she teams up with Iggy Azalea for the highly anticipated track, "Pretty Girls," a swag-infused feminist anthem for all those pretty girls who are tired of all the boys that "got one thing on their minds." After teasing us about this track for what seems like a decade (seriously, were snap bracelets still a thing when they first started talking about this?), Spears and Azalea's funky tune has graced both iTunes and Vevo. Thus far, Vevo is only providing the audio for the track, as a music video has yet to be released — darn it!

According to Billboard, the video for "Pretty Girls" is going to pay "homage to the '80s cult classic Earth Girls Are Easy, starring Jeff Goldblum and Geena Davis." I'm pretty much sold on that alone, but it looks like there's going to be plenty more visual treats in said video than '80s chic and some Goldblum inspiration. As I've decided to take a break from listening to "Pretty Girls" on repeat whilst dancing around my living room, I'd like to present you with several facets I think need to be involved in Spears and Azaelea's upcoming music video.

If you're going to be inspired by Earth Girls Are Easy, you absolutely have to include the movie's leading protagonist, am I right? I remember my crush on Goldblum extending back to Jurassic Park, and it wasn't until later I became aware of Earth Girls Are Easy. Game over, guys. GAME OVER!

Maybe Goldblum can emerge from a space ship after Spears and Azalea put all those "boys buzzing around like flies" in their place.

If we're going to be channeling the '80s, can we please show scrunchies a little love?

In one of the "Pretty Girls" lyrics, Spears asks, "is it true that these men are from Mars?" With all the allusions to an outer space-themed video, actual martians making an appearance would seem fitting.

There definitely seems to be some Gwen Stefani elements within "Pretty Girls," so why not have her join in on the fun? The more the merrier, guys! Seriously, though, a surprise Stefani appearance would be bananas — B-A-N-A-N-A-S.

What would a Spears video be without some killer dance moves? With Spears and Azalea singing about all the boys making them "roll their eyes," they seem poised for a dance off, where I'm sure both would "wipe the floor" with them.

After ditching all the slimy guys in "Pretty Girls," could we just have a team of John Krasinskis show up and get all kinds of respectful and stuff? Talk about a happy ending!