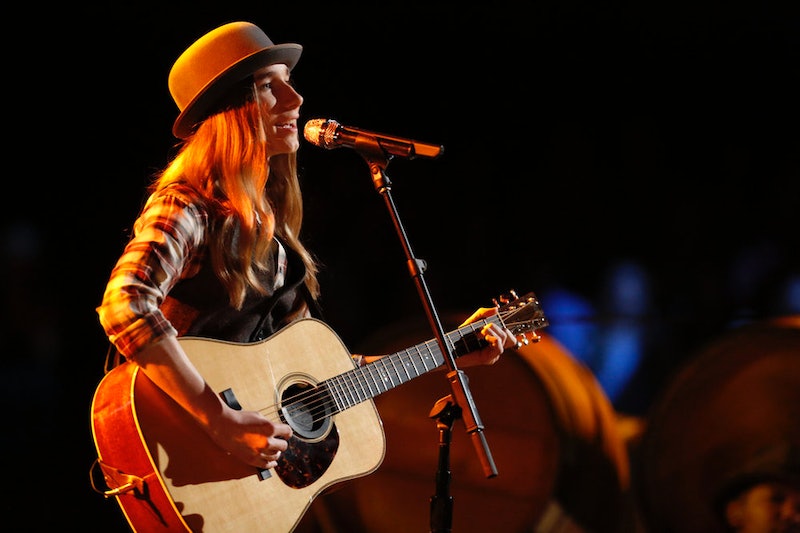 This is an interesting season of The Voice — there's not one by two folk singers in the Top 6. What's even more interesting is that those two folk singers are the only males left in this competition. The youngest of the two — and of the six —is Sawyer Fredericks, who has a pretty great shot at winning this whole game. Fredericks has been a favorite of the coaches since his Blind Audition, and it's pretty obvious at this point that he's a favorite of Americas, as well. The young performer left his mother in tears (happy tears!) with his touching tribute to her of Seth and May's "Shine On." He certainly shined, and proved why he's made it this far in the game.

It's not common to see folk singers in the Top 6. America is usually looking for a country or pop singer to take the title, which means the folk singers get sent home early on in the live shows — regardless of how talented they are. Fredericks survived that fate, and for good reason. The 16-year-old has captivated the voters with his smooth voice, skillful guitar-playing, and sweet stage presence. The key to his success is simplicity, which is a major difference from his female counterparts in this game. Fredericks can get the crowd on their feet by simply standing in front of the microphone surrounded by lightbulbs — and that's why he'll be so successful in this industry.

Though I'd be surprised if Fredericks won The Voice title, he will definitely continue on to be a successful musician. He is a pure talent and there's clearly a market for his style. In a sea of female power-singers who love over-the-top effects, Fredericks stands out by simply being himself. He honors his humble beginnings by singing songs he was raised on, and that's what makes him so lovable. Though his style is different from what we hear on the radio, it's still mainstream enough to get his music played. For this reason, it'll be no surprise to turn on the radio in a few months and hear Fredericks charming us all again.

More like this
Stormi Just Walked A Red Carpet With Mommy Kylie Jenner & Daddy Travis Scott
By Hugh McIntyre
Is Megan Fox Pregnant? MGK Gave A Shout-Out To Their “Unborn Child” Onstage
By Hugh McIntyre
Ryan Reynolds Brought Some Famous Friends To Wrexham A.F.C's Last Game Of The Season
By El Hunt
Jake Daniels Just Became The UK’s First Active Football Player To Come Out As Gay Since 1990
By Sam Ramsden
Get Even More From Bustle — Sign Up For The Newsletter