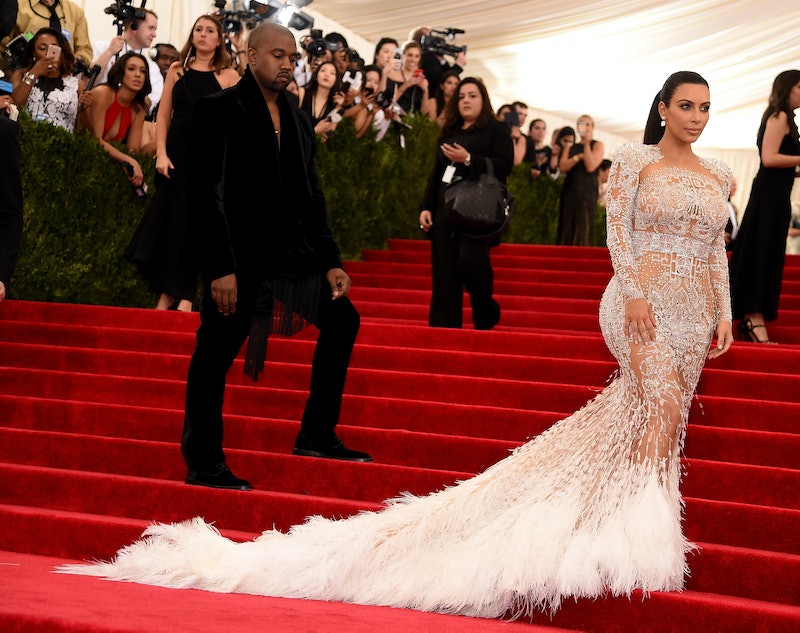 This must be such an embarrassing night for Kim K. Not only did her mom show up looking like a 1980s Bond villain, but it turns out, the dress Kim Kardashian wore to the 2015 Met Gala is almost identical to the dress that Beyonce wore to the 2012 Met Gala. Ugh, what's next? Kim's sister Kendall overtakes Kim as a fashion icon and totally slays in a body-hugging Calvin Klein gown? Oh. Wait.

Even though they are three years and two designers apart — Kardashian's white lace, side-butt exposing number is by Roberto Cavalli, and Beyonce's 2012 Met Gala gown was designed by Givenchy — the similarities are pretty striking. They're tight. They're sheer. They're monochrome. They've got feathery tails. They have long sleeves. Even the way the two did their hair is very similar: Beyonce wore a ponytail. Kardashian wore a pony tail.

Things are getting so awkward.

The most surprising thing about all of this is that Kanye let this happen. He has explicitly stated that he dresses Kardashian so that things of this nature are avoided. He failed tonight. Kardashian failed tonight. And Kardashians glam squad of 234 individuals failed tonight. Was Kylie Jenner too busy?? I'm sure had she seen this look, she would've put a stop to it. No one can copy Beyonce and get away with it.

Kanye must be shuddering.

Listen. I'm not saying Beyonce had the best Met Gala look of all time, but Kim? Try something a little fresher next time.