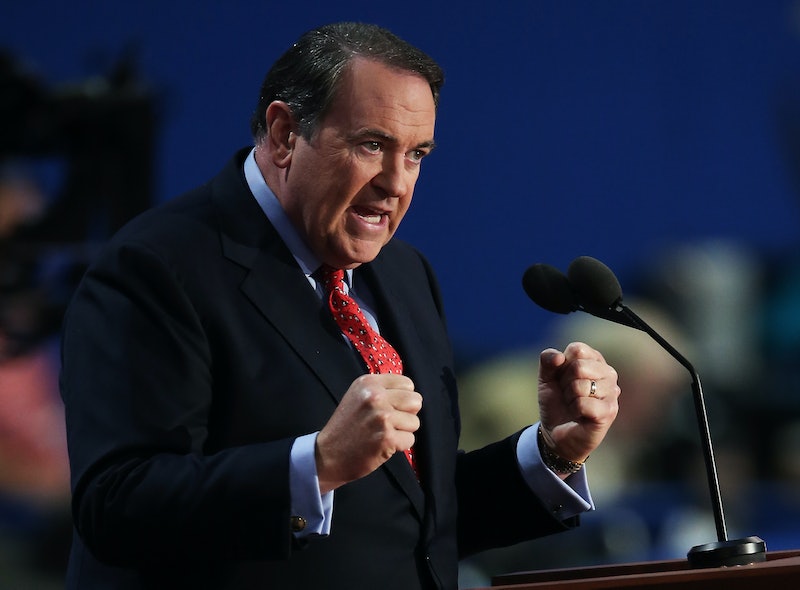 When he announced in January that he was ending his Fox News show "Huckabee," it was pretty much just a matter of time before former Arkansas Gov. Mike Huckabee announced he is running for president — joining the growing field of candidates vying for the Republican nomination. He did that Tuesday, at a live event in Hope, Arkansas, Huckabee's hometown. This is not Huckabee's first attempt at the Oval Office; despite winning the hotly-contested and much-coveted Iowa caucuses in 2008, he ultimately lost the GOP nomination that year to Arizona Sen. John McCain.

After a performance by Tony Orlando and speeches by Arkansas Governor Asa Hutchinson and his wife, Janet Huckabee, Huckabee took the stage to rowdy applause. In announcing his presidential bid, he told the audience, "I truly went from Hope to higher ground" (a running theme throughout his speech). After sharing personal stories about what Hope, Arkansas, means to him, he told the crowd that it was only natural that it would be here that he would announce, "I am a candidate for president of the United States of America."

Huckabee has been married to his wife, Janet, since 1974, and has three children. A Baptist pastor and a conservative Christian, he reiterated his stance on marriage equality (he's against it) as recently as last week, when he told the National Hispanic Christian Leadership Conference that the courts "could not overrule God," according to CNN.

He even sneaked an anti-abortion sentiment in there, as well, kind of a conservative two-fer.

Because we already know his viewpoints are conservative, here's a few unknown facts about the other "man from Hope" (a reference to the Arkansas hometown he shares with Bill Clinton, the original Man from Hope).

In 2000, then-Gov. Huckabee commuted the sentence of Maurice Clemmons, reducing his sentence on burglary charges from 108 years to 47 years. Clemmons was paroled, and later went on to commit more crimes, according to The Seattle Times, including the 2009 murders of four police officers in Washington State. In an op-ed to The Washington Post, Huckabee accepted responsibility for commuting Clemmons' sentence. "The system and those of us who are supposed to make sure it works sometimes get it wrong. In this case, we clearly did," he wrote in The Post.

He lost 100 pounds after he was diagnosed with diabetes

Huckabee weighed nearly 300 pounds before he starting changing his diet for the healthier in 2003, and began running five miles a day. It's interesting to note that Huckabee's weight loss was not universally embraced; a 2006 article in The New York Times that explored the "slenderized" governor noted that he was fighting a cultural battle against southern comfort food, and that some found his weight loss health kick too preachy.

He plays the bass

Huckabee has played in the Arkansas band Capitol Offense since 1996, and according to U.S. News & World Report, the group plays at the Arkansas State Fair, and has been the opening act for REO Speedwagon and Grand Funk Railroad. If that's not a resume booster, I don't know what is.

Clearly his lengthy political record has plenty of potential for spin, whether it's to cast Huckabee in a positive light or a negative one. Whether he's able to last over the long haul with all the other GOP contenders remains to be seen.