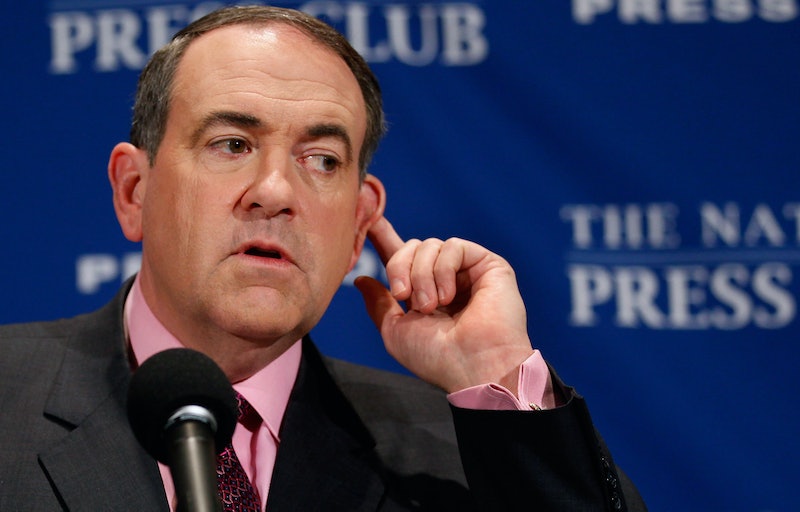 Former Arkansas Gov. Mike Huckabee threw his hat into the Republican ring Tuesday and officially declared he is running for president. He joins the likes of Ted Cruz, Rand Paul, Marco Rubio, Ben Carson, and Carly Fiorina, who have all declared their bids to nab the Republican Party's nomination for the 2016 election. But the name that Huckabee could fear the most in the upcoming campaign doesn't belong to a politician. That's because if the huge backlash he got earlier this year is any indication, another Mike Huckabee and Beyoncé showdown is probably the last thing the Republican candidate wants as he gears up for his second White House run.

Since failing to secure the nom back in 2008, Huckabee hasn't held public office, opting instead to speak out on a weekend Fox News show called Huckabee. He ended the show earlier this year to prepare for his presidential bid, but Huckabee followed up with extensive media rounds to promote his new book Gods, Guns, Grits, and Gravy. But what became the focus of his book tour was one specific chapter called "Culture of Crude," in which he took on none other than Queen Bey herself. It was a big no-no in many people's eyes, and Huckabee's ridiculous and hypocritical comments will likely haunt his upcoming campaign.

In his book, Huckabee blasted Beyoncé and Jay Z's "Drunk In Love" performance at the 2013 Grammy Awards for being too sexual and vulgar. To be fair, he hated all celebrities in his book, but Huckabee specifically called out the pair for creating a negative impact on young impressionable minds and performing what he saw as "foreplay" on stage.

My reaction: Why? Beyoncé is incredibly talented – gifted, in fact. She has an exceptional set of pipes and can actually sing. She is a terrific dancer – without the explicit moves best left for the privacy of her bedroom. Jay-Z is a very shrewd businessman, but I wonder: Does it occur to him that he is arguably crossing the line from husband to pimp by exploiting his wife as a sex object?

He Criticized The Obamas For Liking Beyoncé

In an interview with People magazine, Huckabee challenged the Obamas' parenting for encouraging their daughters Sasha and Malia to like Beyoncé's music. He questioned whether the First Couple actually listened to the singer's lyrics, which he called in his book "obnoxious and toxic mental poison."

I don't understand how on one hand they can be such doting parents and so careful about the intake of everything — how much broccoli they eat and where they go to school and making sure they're kind of sheltered and shielded from so many things — and yet they don't see anything that might not be suitable for either a preteen or a teen in some of the lyrical content and choreography of Beyoncé.

He Back-Tracked Because No One Gets Away With Blasting Queen Bey, And That Means No One

After getting massive backlash for his comments, which, of course would happen because it's BEYONCÉ, Huckabee tried to do damage control and explain the context behind his poor pimpin' comments. In one deft backhanded compliment on ABC News, Huckabee said Beyoncé was better than the stuff she sang in her lyrics. God forbid a woman is comfortable with her sexuality.

Beyoncé is a wonderful talent. My point is she doesn’t have to do some of the things that she does in the lyrics because it’s not necessary. She has nothing to make up for. She’s an amazing talent.

Finally, He Got Called Out By Jon Stewart For Being Hypocritical

On The Daily Show, Huckabee, again, attempted to explain how Beyoncé set the wrong example for young girls who looked up to her. According to Huckabee, of Beyoncé's many accomplishments — artistry, motherhood, feminism, charity, entrepreneurship — the biggest lesson she taught is how to dance on a stripper pole.

The thing that disturbs me, let's say about when you see Beyoncé, who is a role model to young girls. Young girls want to be like her. Do you know any parent who has a daughter that says, "Honey, if you make really good grades, some day when you're 12 or 13, we'll get you your own stripper pole."

Stewart, who said that claim was "diminishing Beyoncé in a way that's truly outrageous," then aired a quick clip from Huckabee's Fox News show. In it, Huckabee plays bass guitar for Ted Nugent in a performance of "Cat Scratch Fever," a classic rock song titled after a '70s slang term for syphilis about a sexually active man who just can't stop scratching that itch.

Do you see my point? You excuse that type of crudeness because you agree with his stance on firearms. You don't approve of Beyoncé because she seems alien to you. Johnny Cash shot a man just to watch him die — that's some gangsta s***!

Beyoncé never responded to Huckabee's horrible slut-shaming, but there was no need because Stewart and countless others were happy to correct the Republican's out-of-date views on a woman's sexuality. After all, Beyoncé and all women have the right to express themselves without judgment. Let's see if Huckabee will once again make the mistake of talking poorly of beloved Beyoncé.