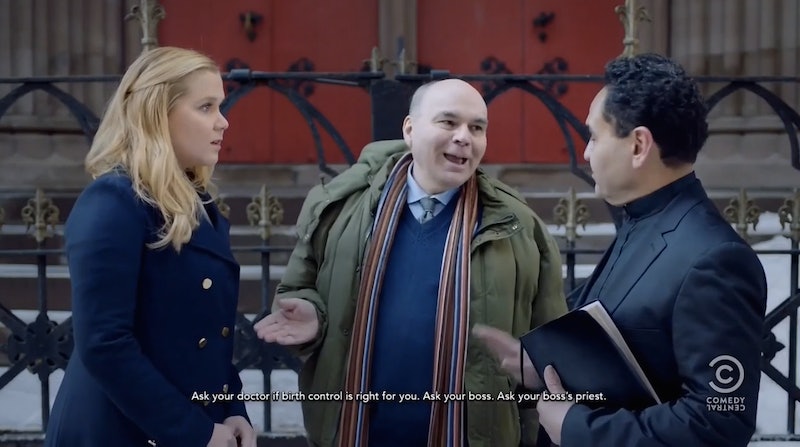 How do you figure out if birth control is right for you? Well, according to Amy Schumer's Republican-approved birth control ad, you ask as many men as you can possibly find. Schumer's feminist brand of comedy has always been on fleek, but the latest season of Inside Amy Schumer in particular seems to be tapping into a well of on-point comedy that kind of makes me want to high-five the television screen every time she appears on it. It's no wonder that Schumer was chosen to host the MTV Movie Awards. Not only is she hilarious, but she is very, very good at using that hilarity to make a statement. When comedians and actors choose to dip their toes into politics, the results can be disastrous, but Schumer's sketch about the bizarre amount of say that men have over women's bodies is the realest thing you'll see all day.

The video begins with Schumer getting ready for her day as a voice-over proclaims how busy women are — too busy to need to worry about their birth control. Thus, the sketch presents itself as an ad for OrthoEsterin, a brand of birth control you need to ask at least seven men about before you can have access to it. And then ask for them again next month. Because you don't get any refills. I mean, come on ladies. How else would we know what to do with our bodies if we didn't have men of all ages to outright tell us?

The exaggerated nature of the video matches the utter ridiculousness of the idea that the best person to have any say in what a woman does with her body is, um, any man at all ever. The amount of legislation that has been passed to make birth control more difficult for women to get in the United States in the past few years is staggering, as are the amount of women who have been forced to protest this kind of legislation because the people making it are, overwhelmingly, white men who have mostly never had a vagina before and, thus, don't really have the knowledge required to make any kind of decision about what those with vaginas can or can't do with them.

It seems pretty simple when you write it out like that, but Schumer's sketch takes that to the natural next step. Since a bunch of men that you've never met are making national laws about your body, what if they made you do all the legwork of asking every man that you can find before you go to buy birth control? Even more hilariously, the end of the sketch compares the long journey Schumer took in order to get one month's supply of birth control pills to the comparatively simple process someone goes through to get their hands on a gun. Because, you know, a gun is your constitutional right to own.

Is it extreme? Yes. But some points need to be made to extremes in order for the basic tenet of them to sink in. The fact that it's 2015 and there's still a debate about whether or not women have reproductive rights is absolutely insane, and Schumer's ad is a reflection of that insanity. It's hilarious, thoughtful, poignant, and really well-done. It's basically just like many other aspects of Schumer's comedy: taking a feminist issue and thinking, "How can I make this hilarious and vaguely offensive enough that people will talk about these issues for days?" And, almost every time, she knocks it right out of the park.

Check out the video on Tumblr here, and make sure you've set an appointment to ask your boss' priest if birth control is right for you.

More like this
Amy Schumer Is Actually The Other Kardashian Sister You Never Knew About
By Jake Viswanath
Harry Styles Called For "Backlash" In Powerful Statement On Abortion Rights
By El Hunt
Sandra Bullock, Girlboss Extraordinaire
By Matt Harkins & Viviana Olen
Jamie-Lee O'Donnell Will Tell The Real Story Of Derry In A New C4 Docu
By Rachel Mantock
Get Even More From Bustle — Sign Up For The Newsletter