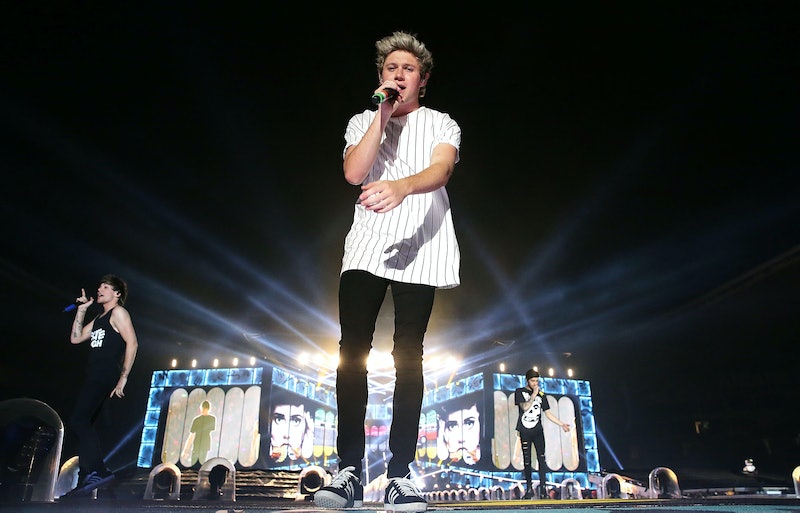 Am I the only one who just gets overwhelmingly sad whenever I see a picture of One Direction these days? Ever since Zayn Malik left One Direction, pictures of the band as a group have just seemed sad and incomplete. However, the band is trucking onward in their career without him, and I owe it to them to give them a chance. Especially since One Direction is coming to The Late Late Show with James Corden on May 14, which will be their first U.S. appearance since the loss of Malik.

"We're all so excited to be appearing on The Late Late Show with James Corden. James is one of our best mates and we're so proud of the massive success his show is having in America," said Liam Payne, of the band's upcoming appearance. "We are currently working on a few surprises with James and his team that we hope our fans will enjoy. It's going to be a great night!"

I mean, it had to happen some time. Payne and Louis Tomlinson have been very vocal on Twitter and in interviews about how the band has already gotten to work creating new music for their next album, and they need to start promoting the whole foursome thing as soon as possible after their tour. I'm just still not sure how to feel about One Direction with only four members, okay? That's like a BLT without the lettuce. That's like a bowl of cereal without the milk. That's like the Spice Girls without Ginger (and look what happened there).

I doubt I'm going to be the only person who will probably need to be distracted from the fact that Malik is very clearly, blatantly not present. After all, Directioners might have had the rest of the tour in order to get used to seeing the boys as a foursome, but those of us who don't spend money on One Direction concerts have not had that luxury. Thus, I've taken it upon myself to give the boys some suggestions on how to distract the world from their missing fifth member when they appear on The Late Late Show.

1. Everyone Wears A Costume

There's no way to tell who isn't there if everyone is wearing a costume, now is there? Especially if it's one of those mascot costumes so they have something to wear over their heads.

2. Have James Corden Dress Up As Zayn

Plot Twist: James Corden has been chosen to be the new fifth member of One Direction. Sorry, Hillary Clinton, but your dreams of One Direction stardom are over before they even became more than an Amy Schumer monologue joke.

Everyone is waiting with bated breath to hear what One Direction is going to sound like without Zayn Malik. I mean, I'm still cringing away from that high note that Harry Styles tried to hit in Malik's absence during the tour. Performing some new music would be a way to answer that question, and thus distract from the questions about Malik.

One Direction has a non-documentary movie coming out. One Direction is permanently relocating to Canada. One Direction is actually a group of androids created in some sort of talented lab to torture us with their good looks and catchy music. (I called that one.)

5. Change The Name Of The Band