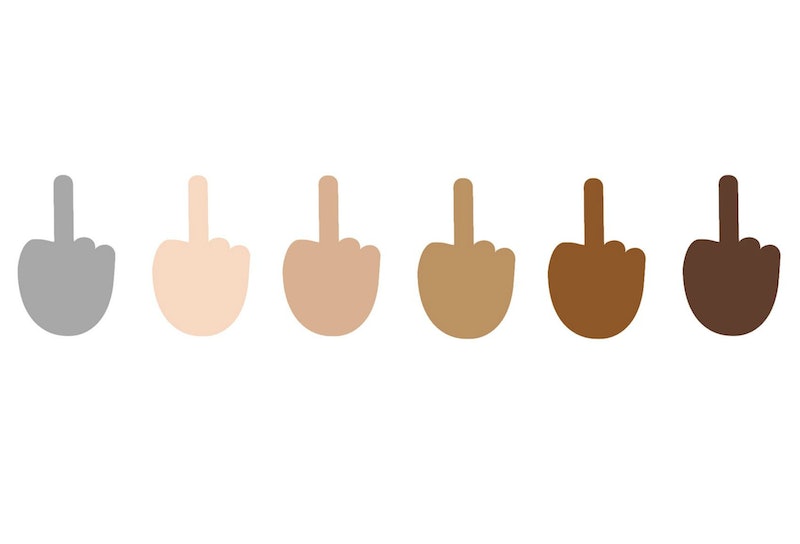 If you've ever found yourself thinking, “Gee, I wish there was an emoji that would let me flip people off in one, simple gesture,” good news: The middle finger emoji is coming to Windows 10, making Microsoft the first company brave enough — or perhaps stupid enough — to add a rude gesture to its official emoji keyboard. I've no doubt this emoji will see a ridiculous amount of use, even though many people probably weren't aware that Windows actually does feature emoji support. The more you know, right?

According to the Emojipedia blog, the middle finger emoji is just one of a great many tiny new pictographs that will be making an appearance when Windows 10 finally debuts. Also known as the “rude finger” emoji and the “flipping the bird” emoji (who doesn't love that turn of phrase?), the middle finger emoji was first included in the Unicode 7.0 update. Released in the summer of 2014, that particular update also included such perplexing images as “Man in Business Suit Levitating” and “Control Knobs.” No other company has been brave enough to add the middle finger emoji to its devices' keyboards thus far, though… until now.

Also notable — and, indeed, perhaps more notable — is this: Windows 10 will also feature racially diverse emoji. Apple may have beat Microsoft to the field on this front, but interestingly, the default skin tone for Microsoft's versions might be a little less questionable: It'll be grey, not yellow. So, unless skin tone is specified, humanoid emoji will now look like aliens as opposed to Simpsons characters. The middle finger emoji, by the way, falls under this heading; you'll be able to flip people off in five different skin tones, plus the weirdo grey one.

Emoji support for Windows actually began in 2012, although it's only recently that a lot of us have realized that it exists in the first place; Windows 10, meanwhile, is expected to hit shelves in July of 2015. But while the middle finger emoji is undoubtedly exciting, does anyone else kind of wish we had emoji for the following hand gestures?

Clueless never goes out of style. I would even argue that it's having yet another moment right now. The time is ripe for a “Whatever” emoji, don't you think?

Admittedly, this one might just look like the standard “Raised Hand With Fingers Splayed” emoji… but still. There's something to be said for an emoji that actually means “talk to the hand.”

“Air quotes” might often be “unnecessary,” but they're still kind of “fun.” Besides, it's the “only” way to textually represent a “Dr. Evil” impersonation.

Because sometimes, that's all you can do.

An insult for the Shakespeare lovers in the crowd.

I know the “Fisted Hand Sign” technically covers this one already — but I'll be honest: That one just looks like you're trying to punch the recipient in the face. What about one that actually depicts two fists bumping? That might clear up any confusion surrounding its usage.

Heck, we could even go full Colbert and add a “Wagging Finger,” too.

8. Any of the Other Many Rude Hand Gestures Out There

The chin flick comes to mind, as does the reversed victory sign. Come on, Unicode. The world is your oyster, and it's full of fabulously insulting hand gestures. Let's broaden the selection a little, shall we?