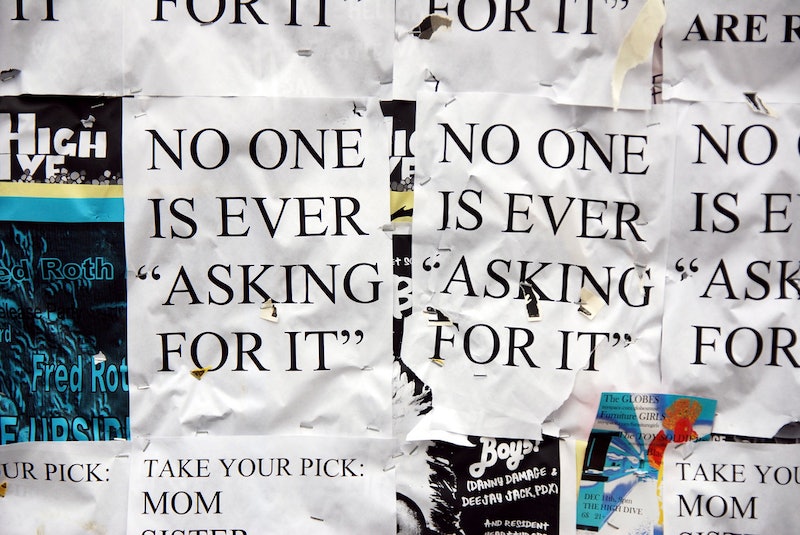 Gender inequality is something that is still highly debated in our society and what it looks like to the average citizen wasn't clear — until now. Girl Pants Productions created a sketch that addresses just this issue. Called "How Gender Inequality Sounds To Normal People," the video gives the viewer a lot of chew on when it comes to how normalized misogyny is.

The video is composed of a series of mini-sketches that all point to some form of sexism. For example, one of the scenes features a television news reporter who is interviewing a scientist who has discovered a cure for HIV and cancer. The scientist happens to be a woman and the reporter is a man, who asks her what she is wearing. Of course, this is an exaggerated example, but points to something that happens quite frequently to women; they're reduced to their outfits. Hillary Clinton's 2008 presidential run is a good example of this, as many news outlets focused on what she was wearing over the merit of what she was saying, which they didn't do to any of the men who were running for office.

The video's clever use of satire really makes you wonder how much sexism you see on a daily basis that you might be bypassing, since gender inequality is normal in our society (even though it shouldn't be). Here's a look at a few situations commonly encountered in the real world — and how bizarre they really are.

In this scene, a guy approaches a woman who was clearly injured. It's nighttime and she says that she was just hit by a guy in a car who swerved at her and drove away. Instead of offering his condolences or offering to get her help, the guy simply states, "Well, I mean, wearing all black at night, you're kind of asking for it." This is pointing to how victims of rape and sexual assault are often slut shamed and told that they were "asking for it" based on how they're dressed, how they behaved, or a myriad of other possible, nonsensical reasons.

This short isn't obviously connected to sexism, unless you know something about the wage gap. The woman in this scene is offered a phone charger from her male co-worker, who says his phone's battery is at 100 percent. She refuses, saying that "It's at 77 percent battery and with my phone, that's as good as it gets." What she is referring to is the gender pay gap, since women only make 77 percent (it's actually 78 percent now, though) the salary earned by white men; the pay gap is also significantly worse for black and Latina women.

3. "You Can't Distract Boys From Their Studies"

This scene features a male teacher who tells a female student about their school's dress code, which has a provision stating that girl's clothing choices cannot distract boys from their studies. She is then forced to wear a box that says "Look Away" to her prom, in place of what was persumably a perfectly suitable dress. Many school dress codes are sexist and place the burden onto girls, who are cited as being "distractions" to boys when they wear anything from leggings to tank tops. Many of these dress codes often unfairly target girls as well, with guys who go to their schools being allowed to wear shirts that expose the entire side of their torso's or sleeveless shirts that reveal their shoulders.

Satire is often used as a way to bring attention to an important social or cultural issue in a way that is relatable for everyone. This video does just that, as it makes the tropes of sexism often cited by feminists very real for the viewer. If you want to watch the full video, check it out below.