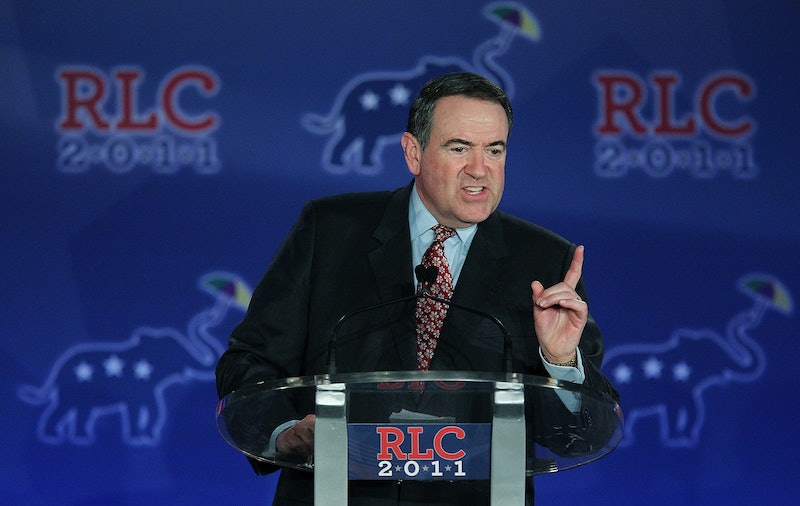 Former Arkansas Gov. and Fox News host Mike Huckabee announced his second run for the Republican presidential nomination on Tuesday. His speech gave shout outs to his small-town roots and his hardworking parents, who he said are representative of people in America who "can't seem to get ahead." His speech was rather placid given his background as a former ranting host on Fox News. Huckabee's most outrageous Fox News quotes range from conspiracy theories about President Barack Obama's citizenship to insensitive comments about the Sandy Hook Elementary School Shooting.

Not surprisingly, many of the quotes reference religion or even go so far as to blame tragedies on U.S. citizens being non-religious. According to CNN, Huckabee is an ordained baptist minister, and his recent book God, Guns, Grits and Gravy actually has a chapter titled "Bend Over and Take it Like a Prisoner!," according to Salon. When he was on Jon Stewart's The Daily Show, he insulted Beyoncé for the second time, according to The Washington Post.

"Young girls want to be like her," Huckabee said to Stewart. "Do you know any parent who has a daughter who says, 'Honey, if you make really good grades, someday, when you're 12 or 13, we'll get you your own stripper pole.' I mean, come on, Jon, we don't do that in our culture."

He's been even more uninhibited on Fox News, where he receives nothing but support. Here are some of his most outrageous and face palm-worthy quotes.

On the Sandy Hook Elementary School shooting in December 2012:

We ask why there is violence in our schools, but we have systematically removed God from our schools. Should we be so surprised that schools would become a place of carnage?

Ultimately, you can take every gun away in American and somebody will use a bomb.

On Mitt Romney refusing to immediately release his tax returns during the 2012 election:

Let him make this challenge: "I'll release my tax returns when Barack Obama releases his college transcripts and the copy of his admission records to show whether he got any loans as a foreign student. When he releases that, talk to me about my tax returns."

On President Obama, Israel, and Christianity:

In an interview with CNN, Huckabee said Indiana's Religious Freedom Law didn't actually hurt anyone and wasn't as nearly as bad as companies like Wal-Mart and Apple working with China and Saudi Arabia where, in his opinion, far worse human rights abuses occur:

The reason that those corporations put the pressure on Indiana and Arkansas was because the militant gay community put the pressure on them. ... For anybody to try to draw some comparison between what's happening by not getting a wedding cake made and people having their hands cut off or being hanged or imprisoned, I find that a stretch. And I think these corporations really ought to be consistent. Quit making money from these countries that are really oppressing human rights, quit bowing to the pressure, and just sell their stuff. That's what they're in business for -- sell stuff. Quit trying to make political decisions.