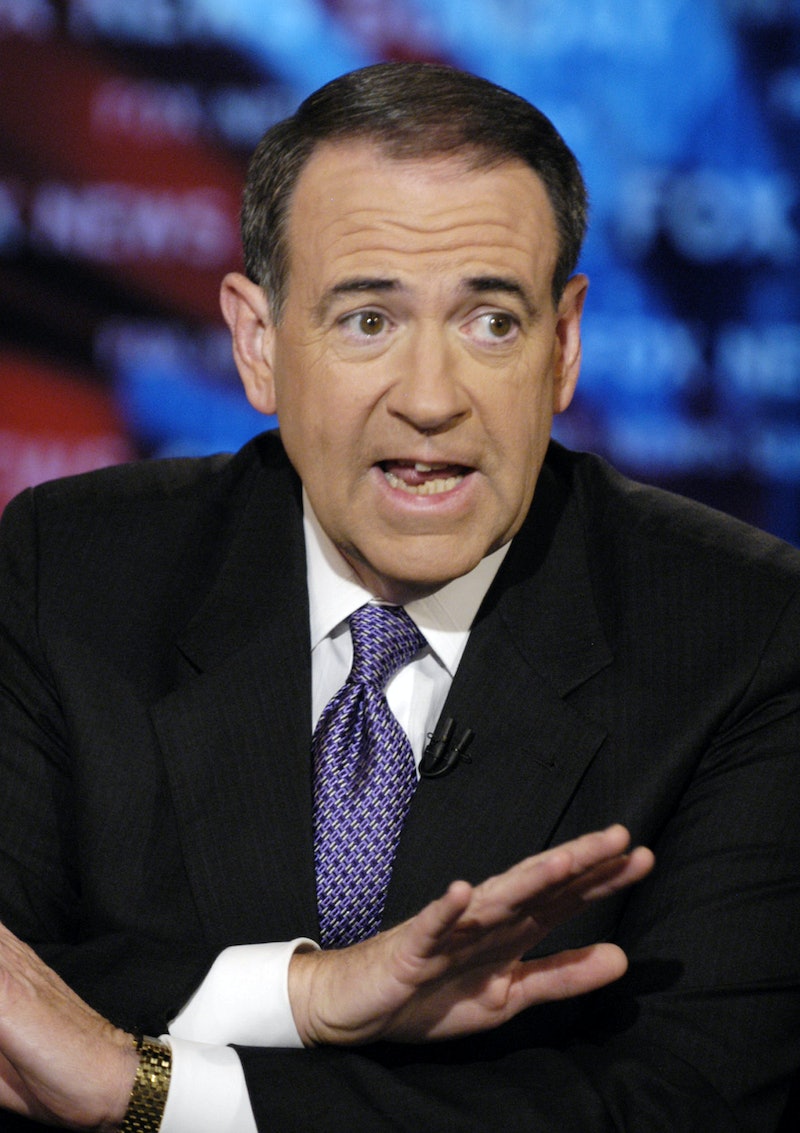 When it comes legalizing weed, Republican presidential candidate Mike Huckabee is blunt about being against marijuana in all forms. No pun intended. The former governor of Arkansas and Baptist minister is opposed to legalizing marijuana for recreational and medicinal purposes, according to Mother Jones. Huckabee’s hardline stance on weed goes a step further than his fellow 2016 Republican nominee hopefuls Marco Rubio, Ted Cruz, Jeb Bush and Rand Paul. Unlike the other 2016 Republican contenders (with the exception of Paul), the former Baptist minister has not admitted to experimenting with weed in high school or college according to The Hill.

“I’m not one that's in favor of simply creating a whole new avenue for people to engage in a drug that we have at least deemed until now to be illegal,” said Huckabee in a response to a user-submitted question about medical marijuana on MSNBC in 2007. Huckabee said he was not in favor of “enlarging the number of drugs people have, particularly if there’s a chance for abuse.” But Huckabee was less committal about the use of marijuana when prescribed by a doctor, admitting that was a “different discussion.” All in all, Huckabee sided with the letter of the law when it came to existing state and federal bans on marijuana use.

I think the bigger issue is is that if you feel so strongly [about medical marijuana], get the laws changed. That’s the best way to handle this issue. And hopefully, there’s other painkillers that maybe be just as effective if not moreso than a drug that many states have banned and the federal government hasn’t made legal for just any purpose.

Huckabee argued on Facebook last year that the use of tax revenues that states gained from legalizing marijuana for youth substance abuse prevention programs would send kids a contradictory message. Huckabee wrote:

But what is a young person supposed to think when the state says, "Don’t do drugs…even though everyone around you is…and the same authority figures who tell you it’s bad not only condone it, but are also making a big profit off it"?

Huckabee also took to his Facebook page to cite a Columbia University study that looked at fatal car crashes in six states and indicated that 12 percent of the drivers tested positive for weed. Huckabee pointed out that five of the states in the study had legalized medical marijuana:

There’s a big push on to legalize marijuana. Backers like to compare pot favorably to tobacco or heroin by saying that marijuana never killed anyone. Well, Columbia University’s Mailman School of Public Health begs to differ. They just completed a study of fatal car crashes in six states. Five of them have legalized medical marijuana. They found that 12 percent of fatal car crashes in 2010 involved drivers who tested positive for pot. That’s tripled since 1999. And if a driver was under the influence of both alcohol and pot, his risk of dying in a car crash was 24 times higher than a sober person. But here’s the really scary part: this study doesn’t even include the latest numbers from states that have legalized recreational pot. So if you drive in Colorado or Washington, buckle your seat belt and keep your eyes peeled for old VW vans.

In November 2014, he referenced a University of Texas study that suggested weed smokers had less gray matter. Huckabee did not mention that the researchers of the study did not conclude whether any or all of the brain changes they detected were a direct consequence of marijuana use.

Huckabee invited Tommy Chong to appear on The Huckabee Show back in 2010, in a memorable segment on youth and marijuana. During the segment, David Evans of the Drug Free Coalition argued that Chong's claim that marijuana could alleviate symptoms for patients of multiple sclerosis was flawed. Studies have indicated that marijuana can help ease some symptoms of MS such as pain, but not other neurological disorders. Chong then accused both Huckabee and Evans of getting paid to push back against marijuana. Huckabee eventually was forced to hang up on the Godfather of Cannabis after the argument got too heated. It’s fair to say after being called out by Chong himself, Huckabee isn’t exactly standing in line to legalize pot.

More like this
What Is Happening With Sheku Bayoh’s Case?
By Sophie McEvoy
The Most Powerful Photos From The Weekend’s Abortion Rights Protests
By Melanie Mignucci
The UK Abortion Laws In 2022, Explained
By Sophie McEvoy
Every Single Big & Small Way You Can Fight For Abortion Rights
By Tess Garcia
Get Even More From Bustle — Sign Up For The Newsletter