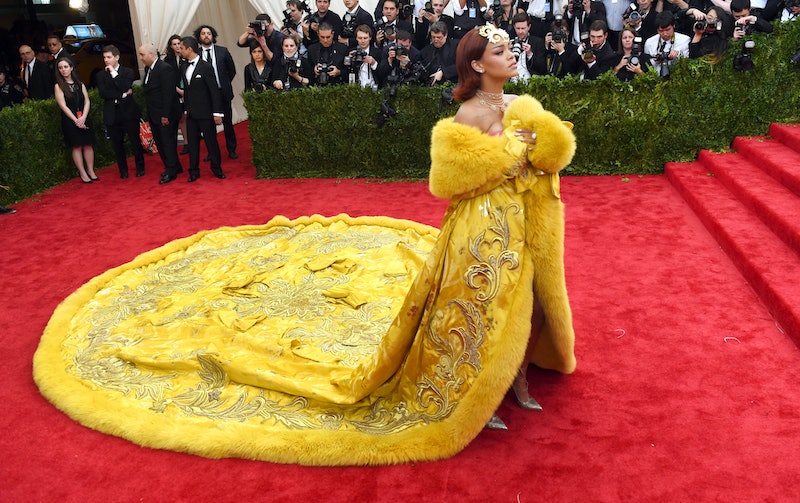 TIMOTHY A. CLARY/AFP/Getty Images
By Shea Simmons
May 5, 2015

Last night, Rihanna killed it at the Met Gala in a gown that was nothing short of legendary, much like the songstress herself. An iconic star deserves an equally as iconic dress, and Rihanna's Met Gala gown designed by Guo Pei was 55 pounds of fabulous. Yes, you read that right. The stunning golden cape gown weighed in at over 50 pounds, and now, we've got even more of the behind the scenes design info for you, according to Fashionista.

While the dress has spawned memes for its grand cape, that may make you assume many didn't appreciate the creation. However, there's no doubt that designer Guo Pei's talent is about to hit the US in a big way. In fact, just last week, Pei spoke with Fashionista about her MAC collaboration, the grand gown and what exactly went in to creating the epic piece. Pei stated that the incredible gown took twenty months to create— Rihanna had previously said two years, but twenty months is pretty damn close— and was composed of golden thread and fox fur. Pei then went on to explain that the dress clocked in at a whopping fifty five pounds. That totally explains why Rihanna told Vanity Fair she had trouble walking in it. However, simply looking at the images from last night, you'd never be able to tell.

When Rihanna reached out, she originally contacted Pei's husband. Pei herself admits that she, "didn't know very much about Rihanna!" That has surely changed now! In fact, the designer had glowing words for the gorgeous singer stating, "Only [she] could wear it. Not everyone can handle that dress. Only women who have the confidence of a queen could wear it." There's clearly no doubt that Rihanna is one of those very women.

While the original version of the dress featured a corset and shoes, Rihanna chose to just rock the stunning cape. The decision, however, was a welcome one by Pei. Regarding Rih's choice, the designer explains, "The cape should be enough. A fashion show is different from a red carpet because a fashion show is about a designer herself. What celebrities wear on the red carpet is a reinterpretation of that dress." Pei's acceptance of Rihanna's changes to her dress show exactly what kind of designer she is, a woman who is willing to allow admirers to reinterpret and make her designs their own. We've got to say that we can't wait to see what else Pei is going to have for us and what celeb is bound to be rocking her epic designs next.