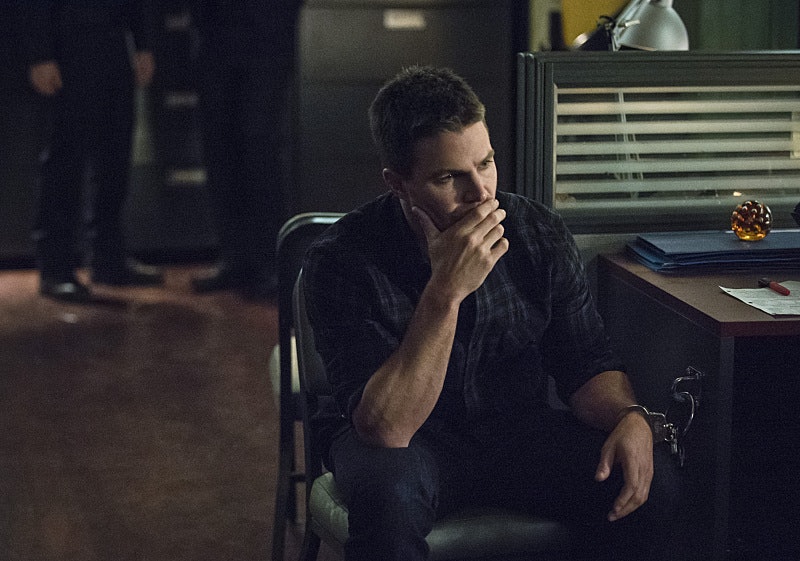 I'm not sure if you've noticed this or not, but there is kind of a lot happening on Arrow right now. We've got Evil-Oliver running with The League of Assassins, shaving his head, kidnapping people, and generally being incredibly unpleasant (but still hot). Thea has been more or less resurrected and will be facing (I’m sure) some pretty dire consequences, and it looks like Starling City is about to be exposed to a deadly airborne weapon. Through all of this the entire city — except the few in the know — believe that the Arrow is dead. Roy very generously took the fall as the vigilante and as far as the general public is concerned, he died in Iron Heights. While it is still a possibility that Oliver Queen will return to the city again, I don't think he will do it as the Arrow. No, I think the death of The Arrow is permanent this time around. But never fear! We haven't seen the last of Queen as a vigilante. My guess is that Oliver Queen will become the Green Arrow in Arrow Season 4.

The show has differed from DC Comics in many ways, but the most noticeable is how Oliver Queen’s alter-ego is referred to. In Season 1 he was simply “The Hood,” or sometimes “The Vigilante,” as police chased him down and made an enemy of him. Season 2 saw him evolve into “The Arrow,” something that continued into Season 3. Now he is a man going by many names: Oliver, Arrow, Al Sah-Him — and the theme to this season has always his inability to live as so many people. He cannot run a company, date Felicity, or do any normal person thing while trying to become someone (something) else. I believe Season 3 will end will him shedding all alter-egos, trying to live just as Oliver again.

As nice as that would be for that to stick, the show is called Arrow, and much in the same way as I know we won’t be in Assassin-land forever, we also can't have a show without a superhero. Eventually something, perhaps super-villain Damian Dark, will drive him back to his crime fighting ways. When that happens, will it be the Arrow returning? I doubt it. Having him come right back would obliterate all of the good Roy did by taking the fall for him, and cast suspicion on his true identity. I think that Oliver will create a new version of his past self and turn completely into the Green Arrow that we've seen in the comics. Executive Producer Marc Guggenheim even said that Oliver’s suit was done for, and I don’t think he was talking about his Met Ball outfit

If true, this would be a fun evolution of the show's slow-burn storytelling. On a purely symbolic level, adding some more green into his outfit takes it out of the darkness and shadows. His current outfit is mostly black, as are his assasin’s robes as Al Sah-Him. The added color may make it seem a bit more (dare I say it) optimistic, or at the very least less doom and gloomy. This would also mean that Oliver is reinventing himself, and hopefully incorporating some more teamwork into his crime-fighting. We have a long way to go until we see if Oliver does indeed evolve fully into the Green Arrow, but I am very much looking forward to the journey.