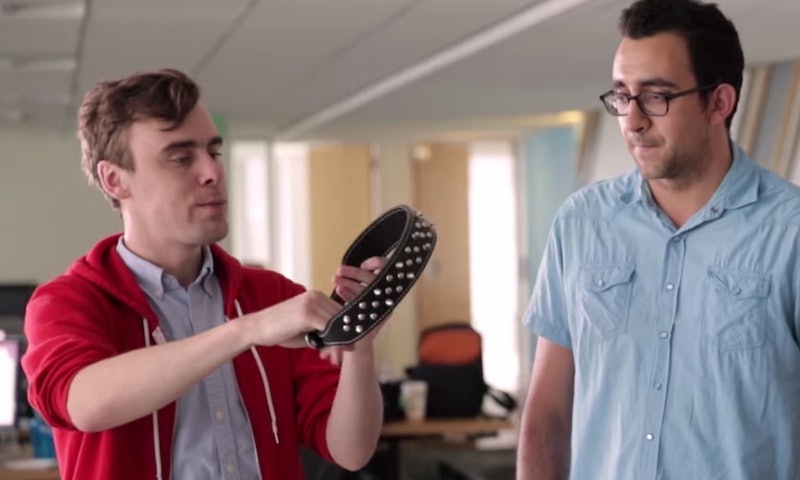 But in defense of dog toy vs. sex toy: this is trickier. I played this game with some people just now. I won (because I am a pervert), and the other people got 3/5 and 2/5 answers correct. As a group, I wouldn't say we're Pollyannas or completely ignorant of the world of sex toys (or dog toys, for that matter) but there were a few that were genuinely tricky. This one, for example:

See, I look at this and I automatically just assumed "Okay, this is a double-dildo on the shorter side," but no. This is a dog toy. This is given in good faith and conscience to beloved puppies to chew on. I mean... I just feel like that would be really uncomfortable to A) purchase from any kind of store, because the person checking you out must also be thinking that this looks like a sex toy and B) watching your dog chew it up (especially if you're a dude); Even the dog probably recognizes that this looks like a sex toy. Like, could you make eye contact with your dog while she had this in her mouth? I couldn't. I definitely couldn't, and I have seen a family member put a thinly disguised vibrator on another family member's neck in the glow of a Christmas tree.

How well do you do? Play along with the video below

Apparently, College Humor are not the only ones who want to play this admittedly valid guessing game: Barkpost also took up the good fight to prove that humans and dogs like to get down with surprisingly similar toys:

More like this
Your Dog Could Be So Much Better Behaved If You Tried Any Of These 25 Tricks
By Claire Epting
Dog Trainers Swear By These 15 Little-Known Tips For Making Your Pooch Behave Better
By Allison Bolt
If You Have A Dog, Trainers Say These 30 Clever Things Will Genuinely Make Your Life Easier
By Dena Ogden
American Girl Doll Memes Are Going Viral On Instagram & Tiktok
By Emma Carey
Get Even More From Bustle — Sign Up For The Newsletter