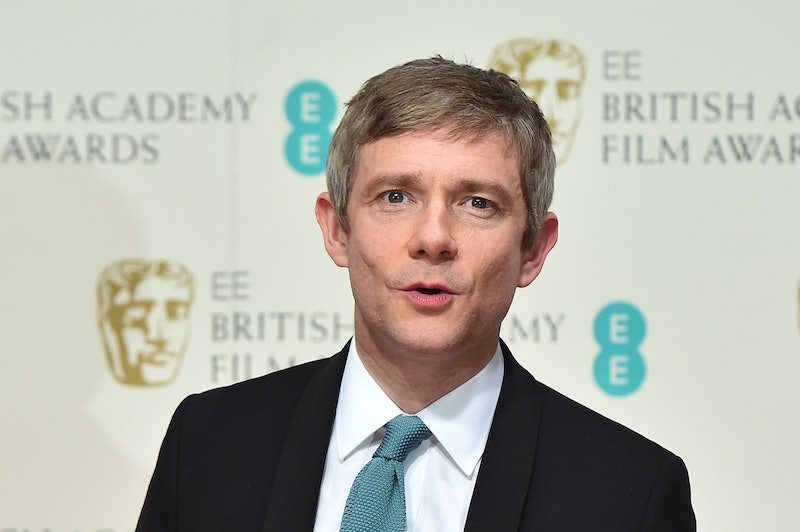 The fandoms have collided yet again and the multifandom nerd in me just can't handle it. You see, Martin Freeman has been cast in Captain America: Civil War, which is hilarious considering it hasn't been that long since it was announced that Benedict Cumberbatch will be playing Marvel's Doctor Strange. Is every Sherlock star just lining up to audition for Marvel nowadays? Should I expect Andrew Scott aka Jim Moriarty to make an appearance in the MCU next? Of course, since we've received no information about the casting other than that it happened, I'm sure I'm not the only person wondering who will Freeman be playing in Civil War?

Spoilers for Civil War and Age of Ultron ahead. We've already got our major players in place, but there are plenty of characters involved in the comic book conflict that have yet to make a film appearance. The main people who drive the Civil War conflict are Captain America (on the side of freedom, liberty, and privacy, of course) and Iron Man (on the side of government superhero registration for the extreme protection of the planet, of course). There's also Spider-Man, who starts out on Team Tony and switches to Team Steve, although whether Marvel will pick an actor in time for the web slinger to actually appear in Civil War still remains to be seen. What does that leave for Freeman?

Here are six potential roles he could be playing in the film.

Despite the fact that S.H.I.E.L.D. was dismantled in Captain America: The Winter Soldier, Avengers: Age of Ultron revealed that Nick Fury has rounded up quite a loyal team of agents who hadn't defected to the HYDRA side. Perhaps Martin Freeman will be introduced as another one of them, whom Steve visits for aid. You know, since having Robert Downey Jr. and Samuel L. Jackson in the same film would make it too Avengers when it's supposed to be more Captain America.

In the opposite direction, perhaps Freeman is a S.H.I.E.L.D. agent that we haven't met yet who was working for HYDRA the entire time. Maybe he's gone rogue and it's up to Steve to track him down and stop him, which he is in the process of doing while this whole superhero registration nonsense is going on. Heck, maybe Freeman is the major villain of the film for when the superheroes aren't busy fighting each other.

Then again, who says Freeman has to have powers? He can still be an innocent (or an antagonist) by the sheer act of being one of the proponents of the superhero registration act. Not that the government can really be blamed for wanting a little bit of accountability after the attack on New York and the whole Ultron thing, but still. It would give us all an excuse to see Freeman in a suit.

Alongside Iron Man, Captain America, and Spider-Man, some of the major players in the Civil War conflict were the New Avengers. Oh, sure, Freeman was not among those who joined Steve and Natasha's team at the end of Age of Ultron, but that doesn't mean he couldn't have joined after the credits rolled. After all, they didn't explicitly say that they'd stopped recruiting.

Another superhero team that had a huge role in Civil War were the New Warriors, and they have yet to be introduced to the MCU at all. While it might be a stretch to think that the New Warriors might get their own movie down the line when the MCU is currently built around the Avengers, I wouldn't say never just yet. I mean, they'll run out of stories to tell with these characters eventually...

Maybe we're making a huge deal out of what will ultimately turn out to be a cameo appearance. There is a stinger at the end of every Marvel movie, and Freeman might have just been cast in that. Of course, that means he might get a bigger role in another Marvel film down the line (maybe as one of Thanos' henchmen?), but still. It's probably better to wait to see who Freeman will be playing before we get all excited.