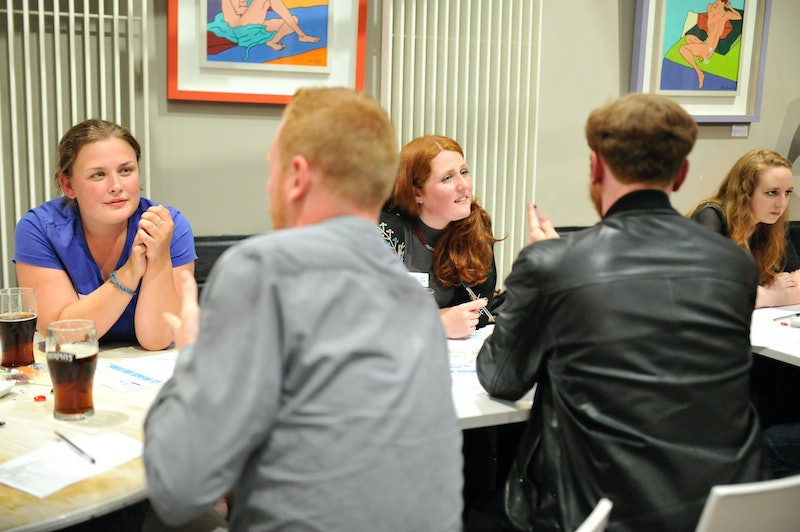 In the very beginning of our relationship, my girlfriend and I would argue over this issue. The issue being: I wanted to know her “number” and she had absolutely no interest in knowing mine. The number, in this instance, is the number of sexual partners we’ve each had. This disagreement of course then led us to speculate. So to avoid conflict, she and I ultimately decided not to bring up the subject again.

Personally, I wanted to know her number because, as a sex writer, I tend to dig a little deeper into intimate topics than most. I’m curious. Also, truthfully: I can be a tad jealous, and I understand that if she did eventually tell me her number that still wouldn’t be enough; I’d then want to know who these guys were, and request that we line them up like criminals so I could stand behind a one-way mirror sizing them up with my thumb and index finger on my chin and my brow furrowed.

She, like myself, admits she can be a little jealous, so instead chooses not to know at all. This, I’ll admit, is probably the better decision to make. There’s less conflict this way. Also, it’s the method the majority of us tend to adopt. A study published in the Journal of Social and Personal Relationships found that 60 percent of participants admitted they have at least once failed to disclose their number to a past or present partner.

Also, research has found that even if we do choose to disclose our number, we lie. But we'll get to that later.

So what’s the big deal? Why is this number such a topic of contention among relationships? The digit merely represent ghosts from the past, yet they have the ability to quite aggressively affect a couple’s future. Lucky for us, The Wall Street Journal recently tackled this issue, collecting stats from various publications and speaking with industry experts to provide some insight.

What number is considered normal?

The National Survey of Family Growth, conducted by the Centers for Disease Control and Prevention and surveying more than 13,000 individuals ages 15-44 between 2006 and 2008, found that the median number of female sexual partners in a lifetime for men ages 25 to 44 was 6.1 and the median number of male sexual partners for women of the same ages was 3.6.

But the numbers did vary.

Of course, it’s speculated that the judgmental eyes of society play a role in these skewed numbers.

A 2003 study published in the Journal of Sex Research found that when men and women were connected to a device that they believed was a lie-detector (but, in reality, wasn't), the differences between the sexes in the number of sexual partners became much smaller.

The reasons behind our lies.

So I guess the only question to ask with this information addressed is: will we ever reveal our numbers honestly? If science and research were the sole authorities drawing the conclusion, the answer would point no from several directions. But ultimately, you’re the person who decides. It’s up to you. So do you want to tell the truth, or whittle the number down to what society deems acceptable?

More like this
Are Gemini & Leo Compatible In A Relationship?
By Kristine Fellizar
What Are Swingers? Everything You Need To Know
By Lexi Inks
GIRLI & Q Fell In Love At A Skatepark & Never Looked Back
By Jessica Morgan
TikTok’s Viral “Rating Game” Is Exposing Everyone’s Icks
By Courtney Young
Get Even More From Bustle — Sign Up For The Newsletter